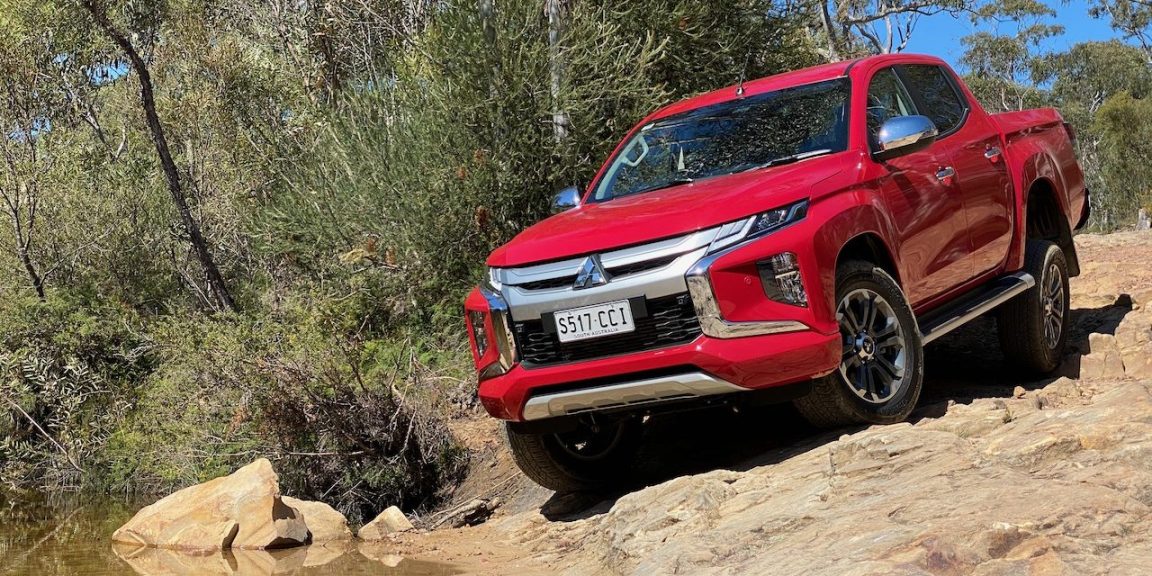 There no doubt the all but top-spec Mitsubishi Triton GLS Auto is an absolute steal at $46,740 driveaway, especially now it’s covered by an industry-leading 10-year/200,000km warranty, but what’s it like to drive? We test the Triton on the road and in the bush to see if cheap means el cheapo, or something else entirely.

The Mitsubishi Triton GLS Auto Double Cab essentially undercuts its main rivals by up to $15,000. Sure, it’s not the newest ute on the block, and it does miss out on a few of the latest safety features, but it’s by no means a cut-price special… and it’s now covered by an industry-leading 10-year/200,000km warranty. Sound tempting? Well, here’s what we think after driving it on the road and in the bush.

If you’re feeling a bit lazy, you can check out the short video I knocked together (below), but you’ll get more detail by reading on.

The Triton GLS is one grade below the top-spec GSR. It’s available with a six-speed auto as tested here for $46,740 driveaway, or with a six-speed manual gearbox for just $44,490 driveaway. It’s powered by a 2.4-litre four-cylinder turbo-diesel engine that makes a claimed 133kW at 3500rpm and 430Nm at 2500rpm; down slightly on the competition but the Triton GLS’s 1990kg kerb weight makes it slightly lighter than the competition, so on-road performance is on par.

Like most other 4X4 dual-cab utes, the Triton has a separate chassis construction with independent front suspension with coil-spring struts and a live-axle rear on leaf springs. It runs disc brakes up front and drums in the rear. The model tested here has a 910kg payload and 3100kg maximum braked towing capacity and a 310kg maximum tow-ball load.

The fuel tank capacity is just 75L but the ADR combined fuel consumption figure of 8.6L/100km means touring range is good. On test, the Triton used 9.5L/100km which results in a touring range of just over 750km. 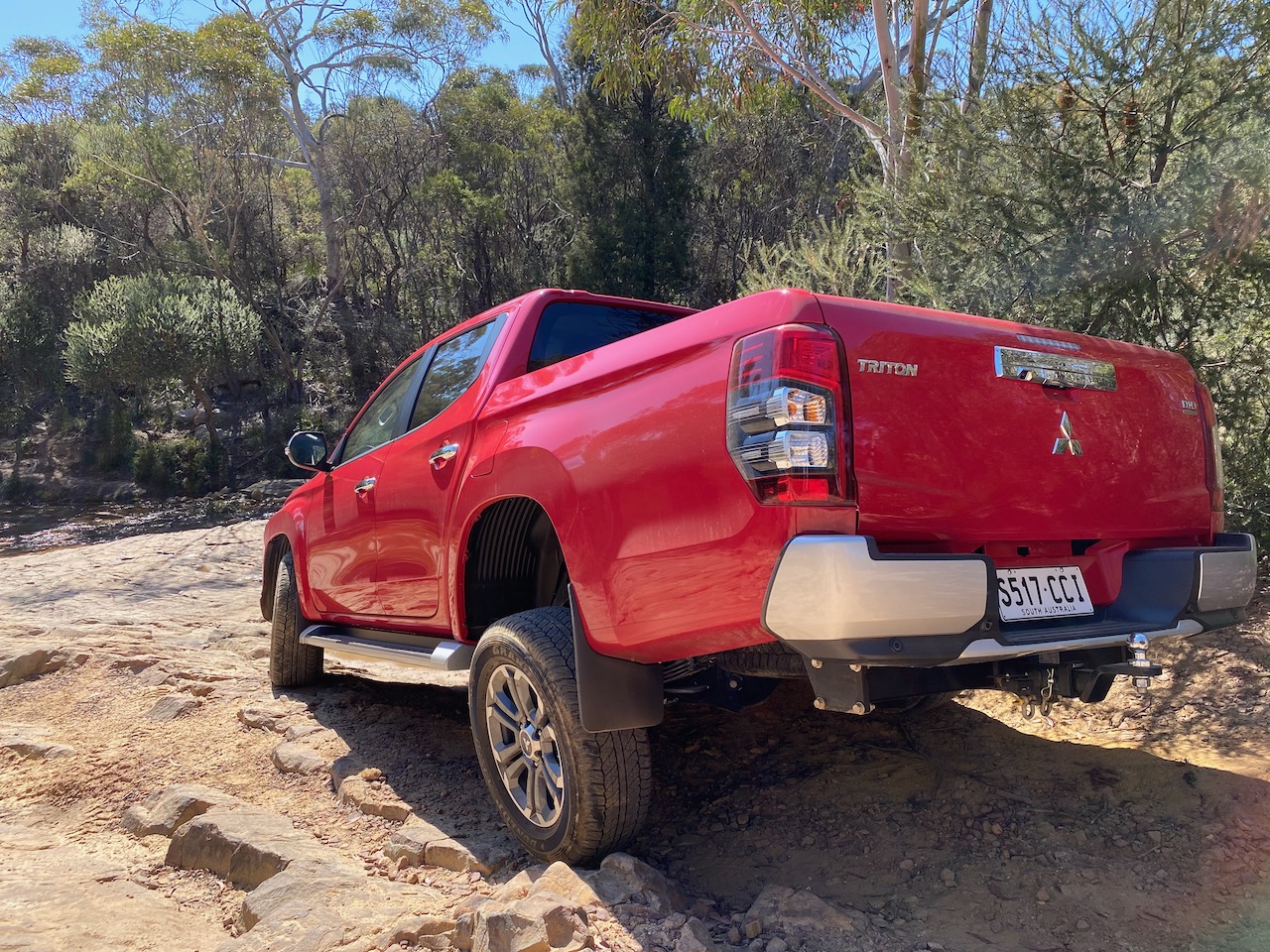 What gear does it have?

The Triton GLS auto comes standard with a fair bit of kit including a 7-inch touchscreen with reversing camera, Apple CarPlay/Android Auto and digital radio, keyless entry and start, tilt and telescopic adjustable steering wheel, two 12V plugs, two front and two rear USB ports, dual-zone climate control air conditioning, rear air circulator, 18-inch alloys, LED headlights and DRLs, fog lights, and electric fold and heated mirrors. There are six tie-down points in the tub, but the tailgate can only be locked using the key, and there’s no power or lighting for the tub. 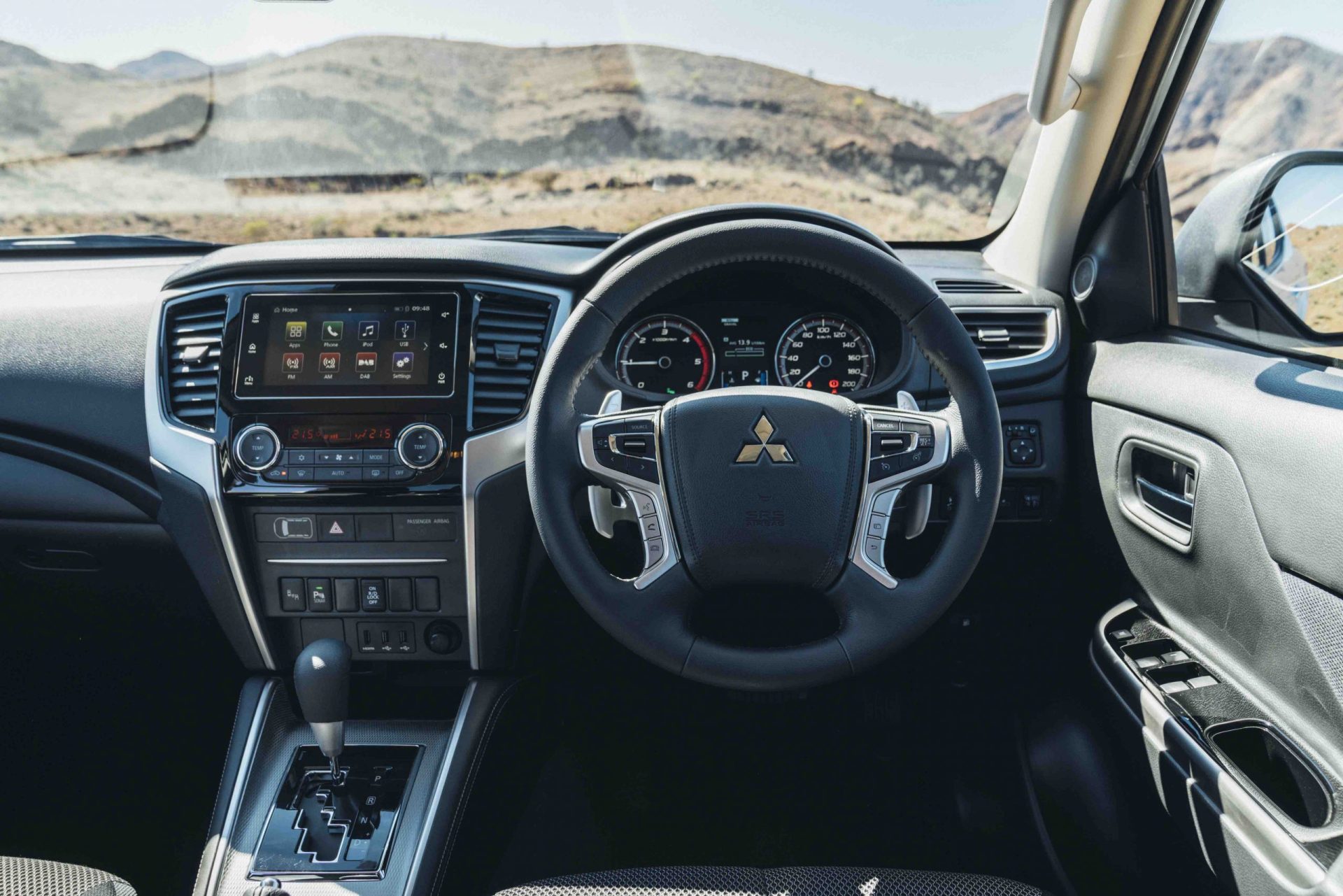 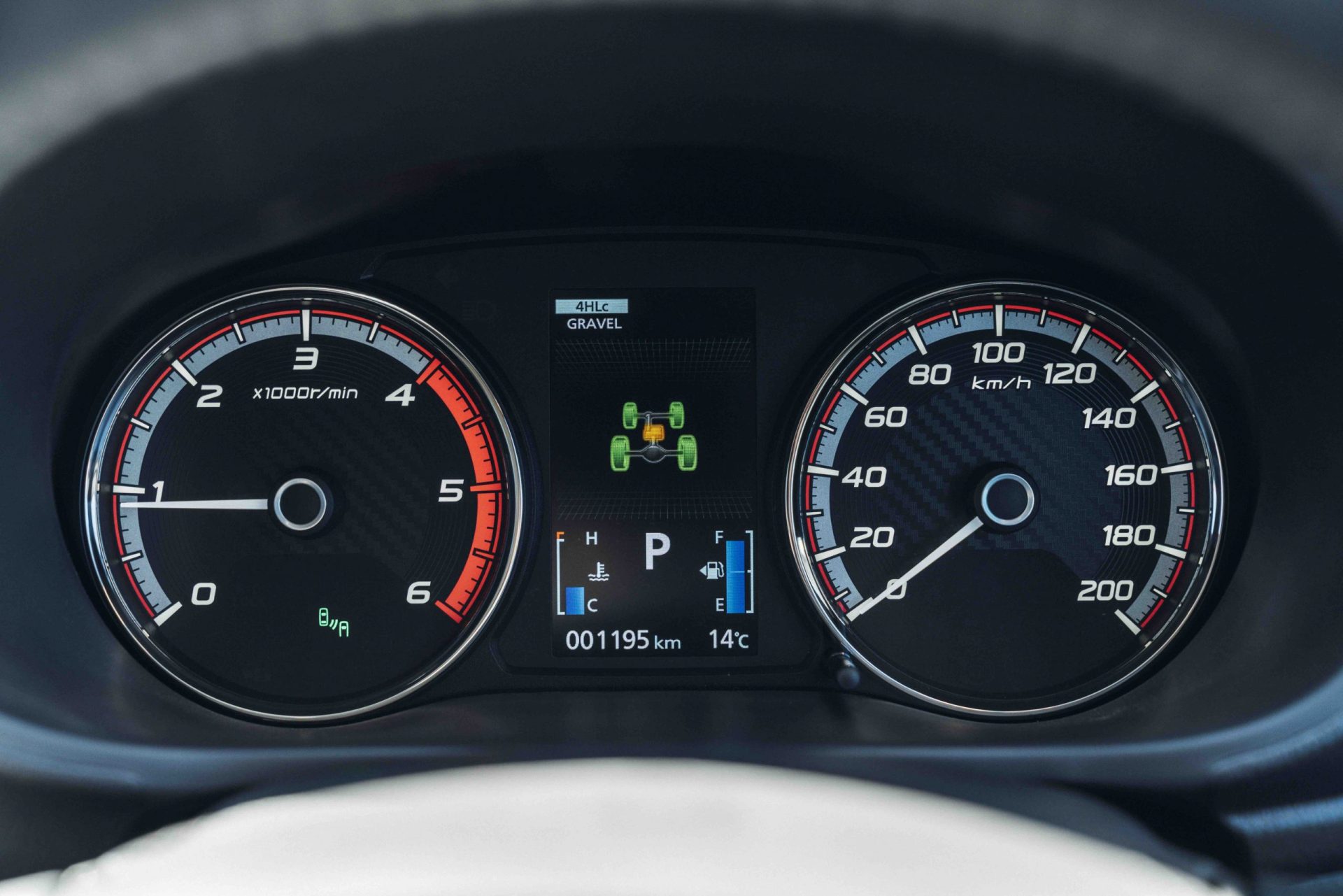 As mentioned, the Triton GLS’s 2.4-litre engine doesn’t give away much to the competition in terms of on-road performance. It works well with the six-speed auto and provides more than adequate acceleration, briskly getting away from a standstill and providing enough grunt to maintain a set speed on big hills. The auto model features steering-column-mounted paddle shifters that don’t move with the steering wheel, making them a delight to use as they are always in the same spot.

The Triton’s steering is well-weighted and responsive, and on-road handling feels quite dynamic. It turns into corners with good response and exhibits well-controlled body roll. Like most 4X4 utes, it feels a bit firm at the rear when unladen, but unlike some other utes, the Triton’s rear suspension is well matched to the firmer front-end.

The benefit of the triton’s Super-Select II selectable full-time 4X4 system can’t be overstated. Although all utes have pretty effective stability control systems these days, the Triton’s Super Select gives it an edge in sketchy conditions, providing more grip and traction when roads are slippery, or when you simply want to drive it with a bit of enthusiasm on a twisty road.

Gearing is well suited to open-road touring and the Triton’s engine is smooth for a four-pot diesel. NVH levels are also well suppressed, with tyre rumble barely audible at highway speeds and not much wind noise around the mirrors. Our test vehicle exhibited a minor rattle in the passenger seat on bumpy roads but other than that interior fit and finish is good.

Speaking of seats, the Triton’s front pews are quite generous and supportive, but the driver’s seat only has manual adjustment with one control for height adjustment, meaning you can’t adjust the rake of the seat base. There’s enough space and adjustability for most to find a comfortable seating position, though.

The Triton’s cabin is narrower than some others and there’s not a huge amount of width across the back seat, which is better suited to two occupants than three. Legroom is reasonable, however, and there’s a fold-down centre armrest with a couple of cupholders. And the roof-mounted rear air circulator is more effective than it sounds at pumping cool air through to rear-seat passengers. 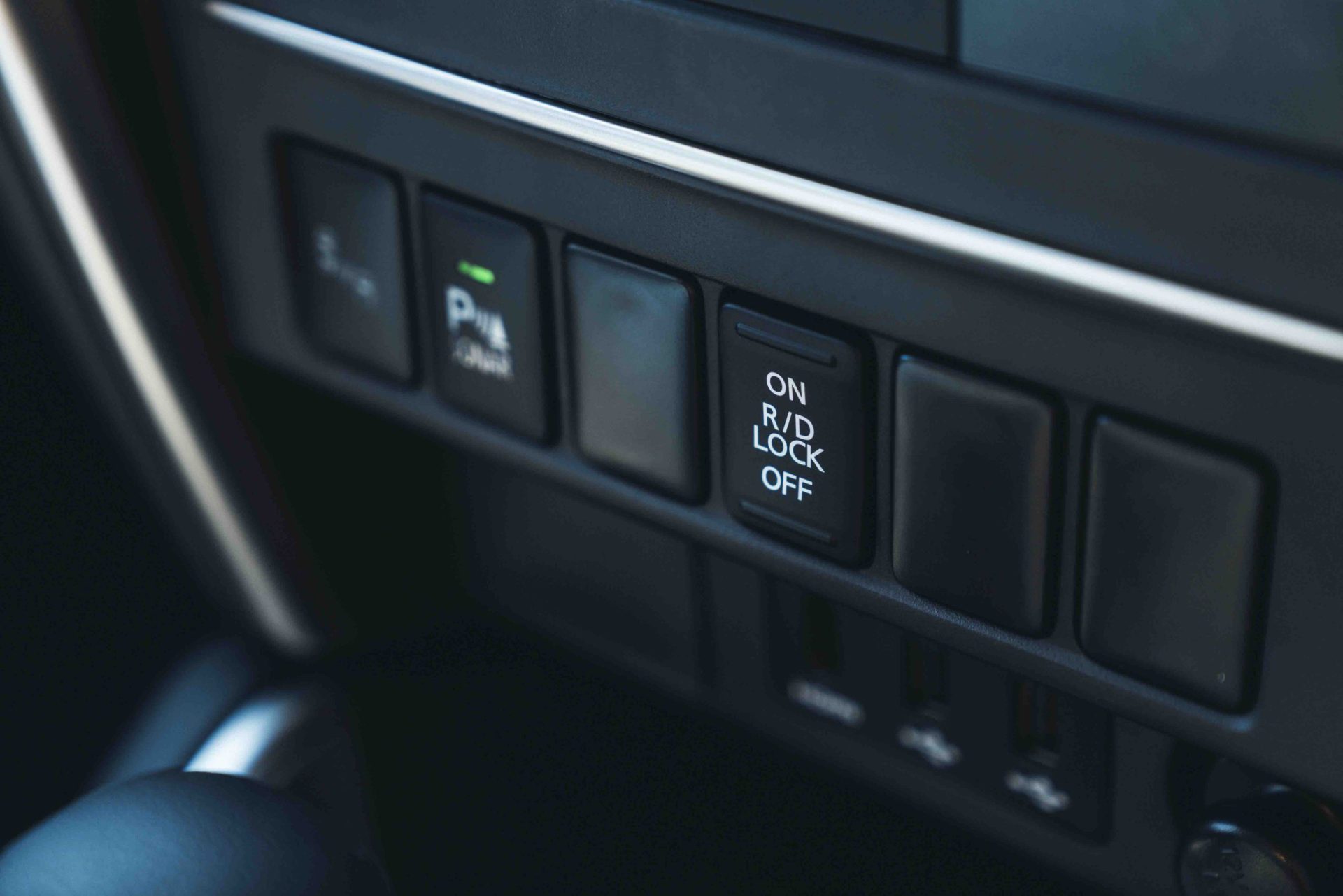 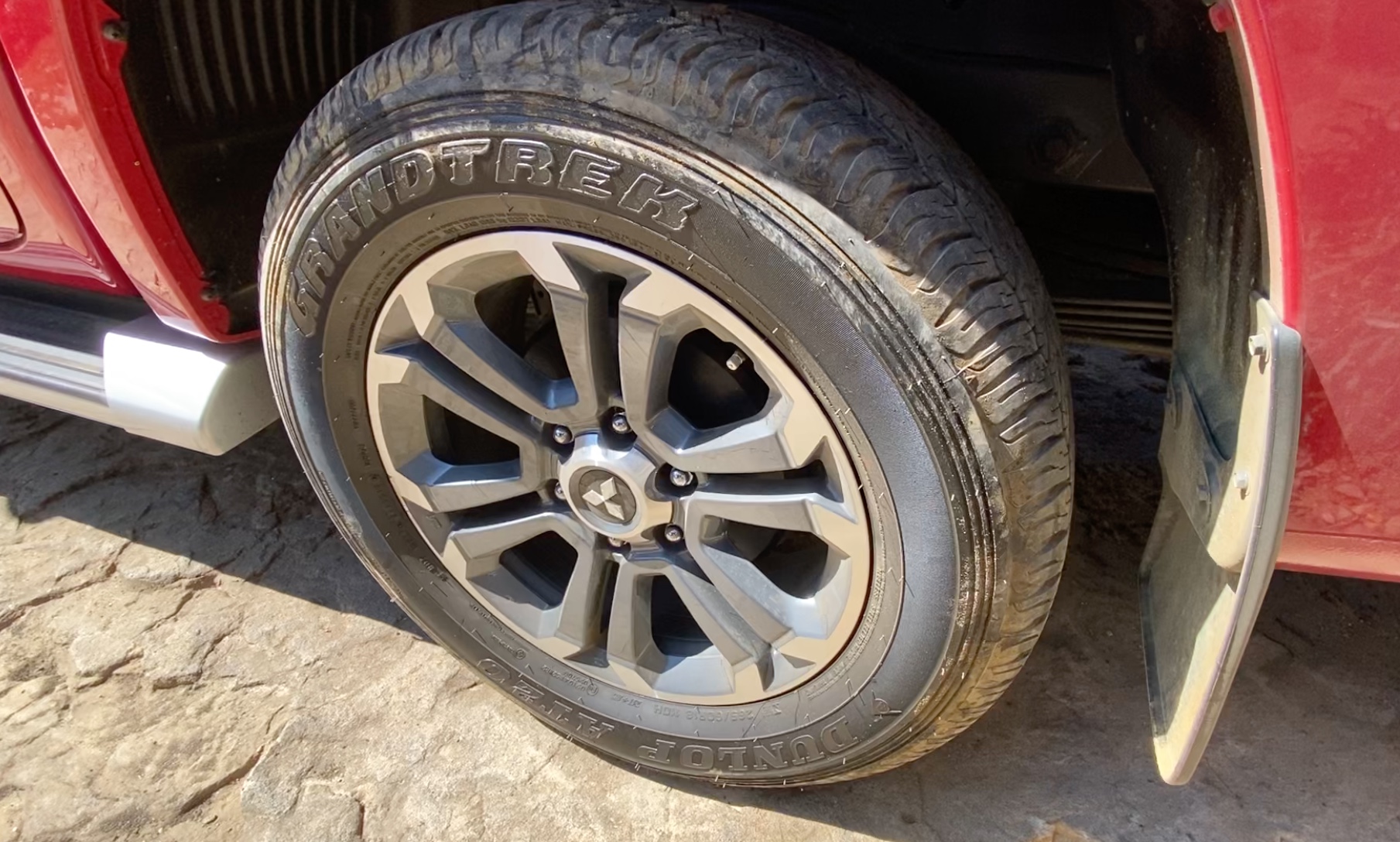 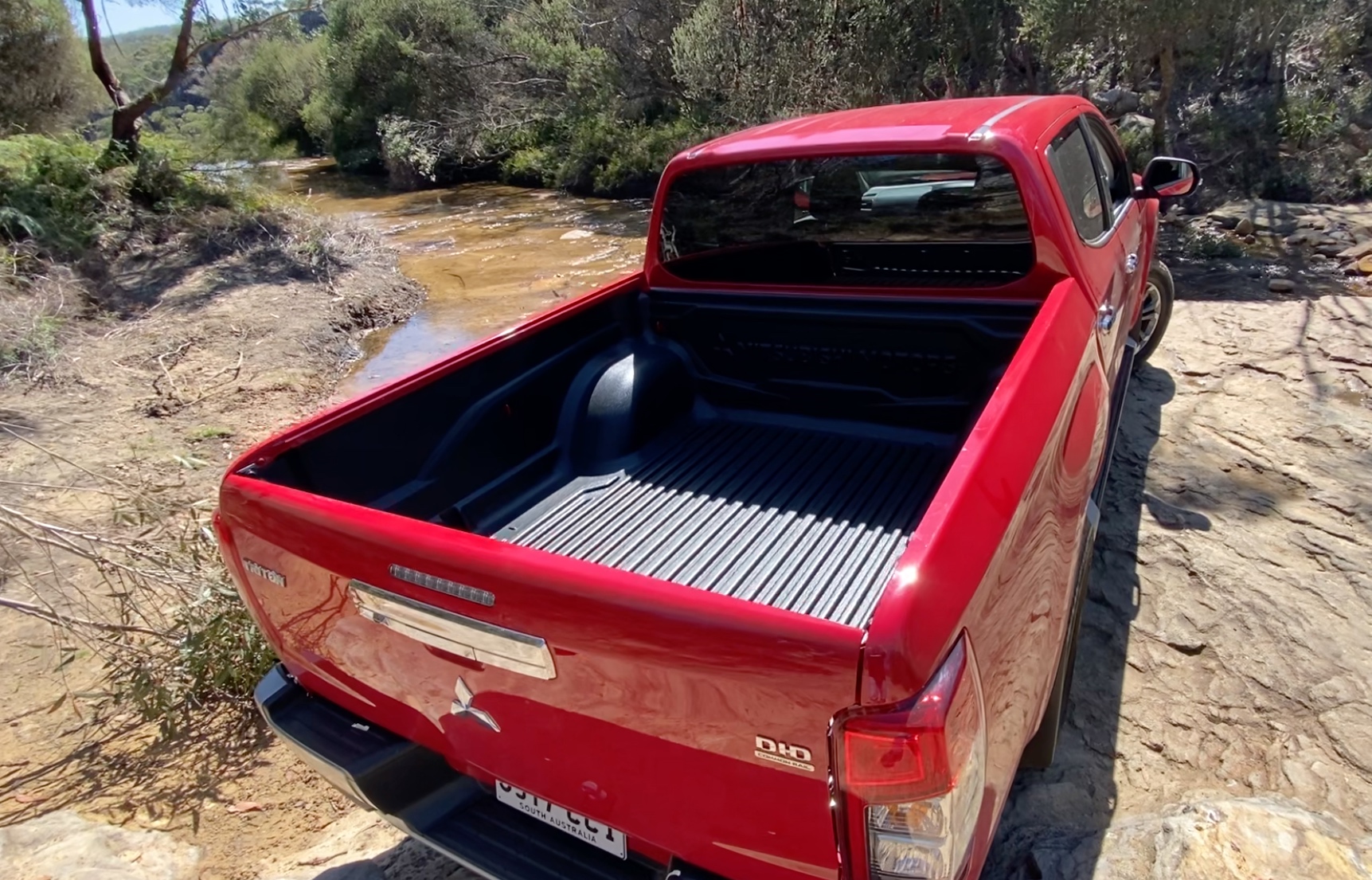 While it doesn’t offer as much wheel travel as some other 4X4 utes, the Triton GLS is still relatively capable off-road thanks in part to a combination of effective electronic traction control, its standard rear diff lock and its user-selectable drive modes (mud/snow, sand, rock and gravel). Low-range gearing is better than many other auto 4X4s and in low-first it has an overall ratio of 39.463:1. The hill descent control also works well.

As it’s smaller than the competition, the Triton feels quite manoeuvrable and easy to place off-road. Ground clearance isn’t exceptional at 220mm but thanks to the shorter-than-other-utes 3000mm wheelbase, ramp-over angle isn’t bad at 25°. The approach angle is also pretty good at 31°, while departure angle is okay for a ute at 23°.

The Triton GLS’s OEM road-oriented 265/60R18 Dunlop Grandtrek AT20s work better on the road than off it, but there’s a huge range of off-road light truck tyre options in this size these days, or you could go up a size and fit 265/70R18s. 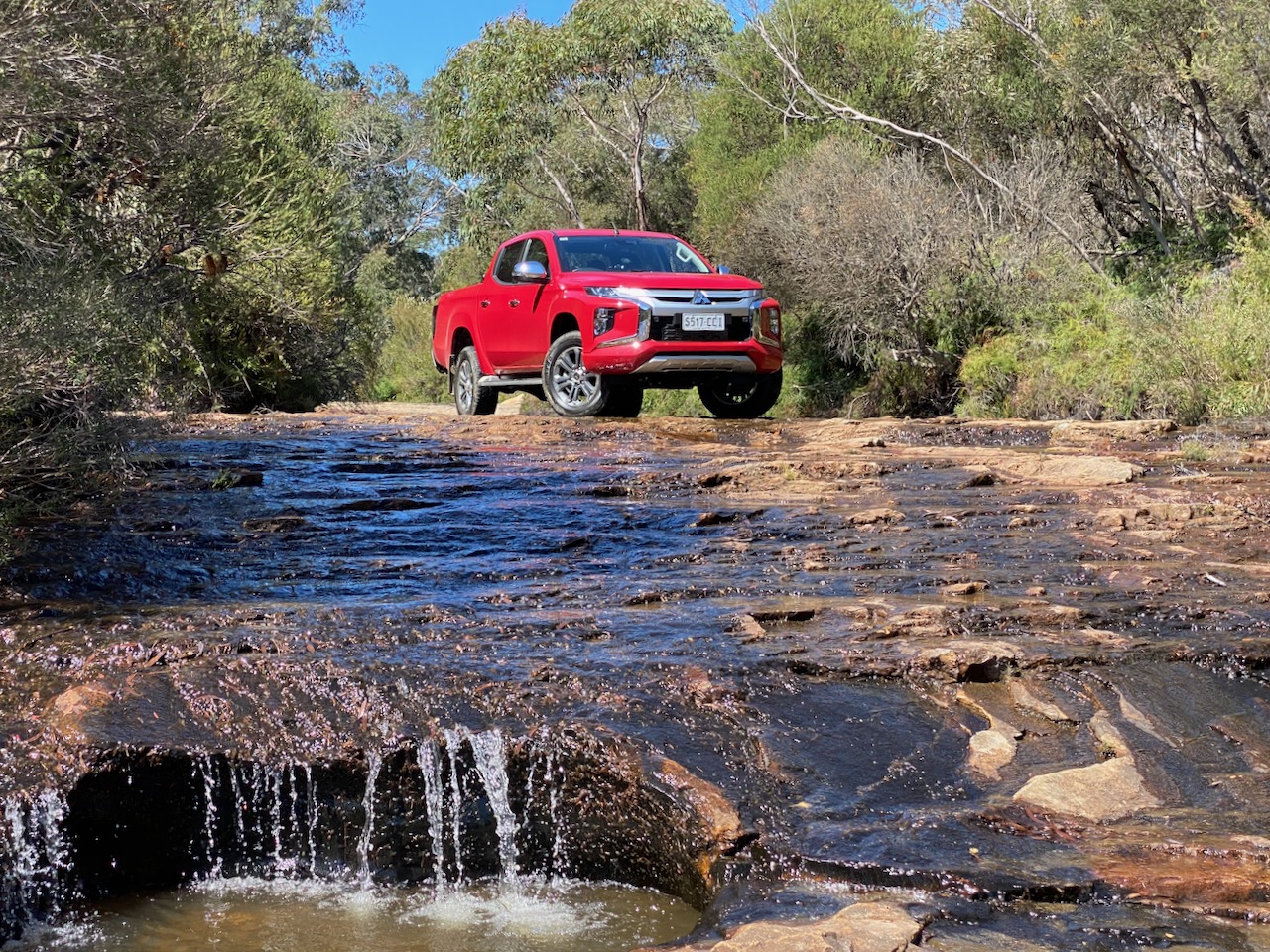 Would you buy one?

Well, I don’t know about you, but if I only had $50k to drop on a dual-cab ute, and I wanted a few creature comforts, I’d seriously consider the Mitsubishi Triton GLS auto over a lower-grade Ranger, for example, or lower grade HiLux. Even with $65k to spend, you’d still be mad not to take a look at the Triton; after all, with more than $15k left in your pocket, you could buy a hell of a lot of accessories such as tyres, suspension, bar-work, winch and maybe even a canopy.

The fact Mitsubishi now offers a 10-year/200,000km warranty, with 10-years/150,000km capped-price servicing and 4-years roadside assistance, makes the Triton even more appealing. Sure, there are some conditions on that warranty period (you have to have the vehicle serviced by a Mitsubishi dealer) but even the fallback warranty of 5-years/100,000km is still good.

Finally, that front-end. Like many I wasn’t that keen on the Triton’s 2019 facelift, but I’ve got to say it’s grown on me. In fact, I reckon it looks better than a few other 4X4 utes that have recently copped a restyle. Anyway, if I owned one myself I’d soon be fitting a bull bar and lights.

Let us know what you think of the Mitsubishi Triton GLS Auto in the comments section below. Would you consider buying one? For reference, here are the offers on some of the Triton GLS Auto’s competition (using 2000 as the postcode and checked on 23 October 2020): 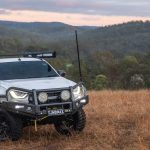 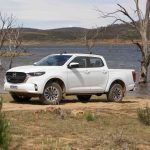