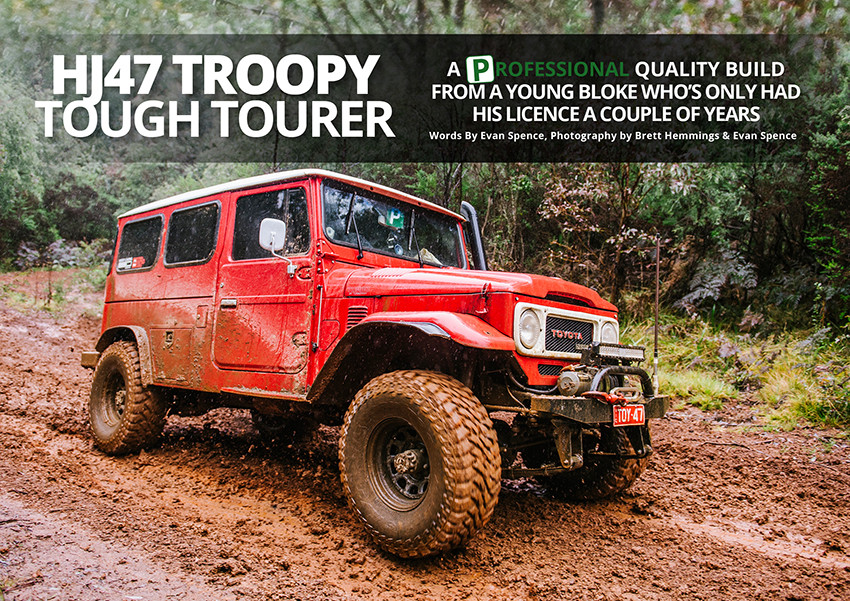 Every now and then, you see a custom truck that is so good it makes you want to sell your worldly possessions and hope the owner will accept your low-ball offer, even if they aren’t technically selling it. Everything about the vehicle makes you want it, nay need it! It’s a case of love at first sight if you will, and it’s causing you to lose sleep.

Jacob’s Troopy is one of those trucks. Even though it might not be the most comfortable or sensible touring machine in this day and age of cushy modern trucks, I say screw cup holders, electro-wizardry and ANC(R)AP safety ratings. The thought of bouncing along the tracks in this a one-of-a-kind machine is so appealing I almost want to go pick it up right now.
The only minor detail stopping me from doing so though, is the fact Jacob won’t sell it. Sheesh, and I thought we were mates too! Even when I offered to take it off his hands after our trip through the Victorian High Country to save him from having to wash it, he simply laughed and said “take a number and get in line mate, plenty of people have tried to buy this one off me… do you want to buy my clapped out GU Patrol instead?” So, why won’t he sell it?
Well, you see he built it himself, which is putting it lightly – a torturous process (for those who have built a custom – you know what I’m saying) that tends to build a bond between man and machine. Jacob has also done a really (REALLY) good job too, which is even more impressive when you consider he is a young lad still on his P plates. Yep, Jacob has more fabrication and mechanical skills in his pinkie toe than most of us have in our whole bodies. The most impressive of all modifications he has performed is a little more involved and harder to spot though, so lets take a closer look at what has to be the best custom HJ47 Troopy in Australia.

THE TRUCK
The Troop Carrier didn’t look anywhere near this flash when Jacob picked it up. It was a pale blue/grey colour, rusty and in many ways it looked more like a terminally ill Smurf than four-wheel drive. As Jacob is in the mechanical trade, he had the expertise and resources to change things around though. Still, he was in love with the old girl, and even thought he got too much car for his money… so he cut the back off it.
Look deeper than the fire-truck red paint job, custom handmade barwork, and turbo-diesel engine conversion, and you might notice Jacob’s truck is a little shorter than most Troopies. This is because he has performed what is known as a ‘bob’ which I can only assume stands for Butcher Off Back. Well, butcher is definitely the wrong word; I spent hours up-close-and-personal with the Fire Truck (it’s name for obvious reasons) and couldn’t even see where the cut was made.
“It is a bit of a trade secret”, says Jacob. “Essentially I cut in places you wouldn’t quite imagine, like through the side window. Overall, except for the engine conversion, cutting off the rear overhang has been my favourite modification and thanks to the flat sides it was actually less painful than I had anticipated”.
Other than that, Jacob has been careful to keep the Troopy looking as period correct as possible and use Toyota parts where he could. Like the seats he pinched from a Toyota Surf for example. Sure, he could have gone all out and put some ‘hectic’ racing seats in to replace the stock vinyl pews, but why ruin the vibe of one of the most iconic four-wheel drives Toyota ever built? Speaking of ‘hectic’ modifications though, are the flash LED headlights, which have been installed to replace the aging candleholders originally fitted to the Troopy. We wont give him too much grief about those though, as they definitely are an improvement over stock.
Then there is the red paint job, which was definitely not a Toyota factory option. “I was going to just paint it with rattle cans” Jacob confesses. “But once I saw how good it looked with the shortened body I decided to go all out and have any rust removed and the body professionally painted”. And the effort was definitely worth it, as Jacob also mentioned the only rust now in the vehicle is new stuff, none of the work he has done has rocked the boat in terms of dreaded metal-cancer. While surgery was being performed on the body of the Troopy, Jacob decided to build a small storage box on the drivers side, which houses any recovery gear he may need. A very clever decision which should have been a stock inclusion from the factory.

THE MODIFICATIONS
Now, we mentioned engine conversions earlier, and Jacob’s Troopy has the holy grail of Toyota turbo diesel engine swaps. “I found an old 60 Series with the factory 12HT engine in it going cheap” he tells us. “A few days later, we had the old engine out and the new one sitting in place”. It hasn’t been all beer and skittles for Jacob and his new found power plant though. “It spat a turbo while I was up in Cape York, What happened next was pretty cool though… Facebook saved my bacon” he laughs.

“I put a call out seeing if anyone had a spare turbo anywhere close by, and a bloke got back to me saying he would give me the turbo off his truck, if I paid for a new one to be put on when he returned from a trip to the big smoke. Not only was he willing to help me out, but the turbo he had was a performance G Turbo, so I ended up with a better than stock set-up anyway”.
Getting traction to the ground (now that he has more than the stock15kw to play with) is a set of 33in Maxxis Bighorns, which work well in the slush around Jacob’s native Victorian High Country. He also experimented with an auto-locking differential in the rear end, but found it was chewing out rear tyres and putting a fair amount of stress on the driveline. An ARB Air Locker recently replaced the auto-clunker, and Jacob hasn’t looked back. Literally – his truck now goes anywhere!

The custom barwork looks store bought, but no, Jacob built that too. Rather modestly he says “it looks okay I guess”. Take it from me though it looks as professional as the rest of the build. The front bar houses a 12,000lb winch, and an LED light bar, both of which are working well and are essential for the places this bus gets taken. The rear bar also acts as a swing-away tyre carrier, which takes some pressure off the rear door, and looks pretty darn trick too.
Inside, Jacob has ditched the rear seating and built a set of custom drawers to suit, which run the full length of the cabin. Well, not the full length. Jacob still wanted enough room to fit his Engel, which has been positioned directly behind the passenger’s seat for easy access. Next to the fridge sits an inverter for powering any electrical gadgets Jacob or his partner Bree brings along.

THE OWNER
Jacob might be a young fella, but he has seen more of this country than most of us. He lives in Victoria, so has regular access to some of the best terrain in Australia. Something he likes to take advantage of on a weekly basis! He has also (as mentioned) recently completed a trip to Cape York, with a group of like minded 40 Series owners.

When not working as a diesel mechanic, Jacob is out four-wheel driving or deer hunting with his girlfriend. Well, that or working on the next project vehicle. A Toyota HiLux with a LandCruiser 3B engine. When asked why he decided to go down this unusual engine conversion path, Jacob simply replied “Something different”. Hard to argue with logic like that.
If you happen to bump into Jacob on the tracks, make sure to say g’day. Just don’t offer him money for his truck, as refusal can often offend. 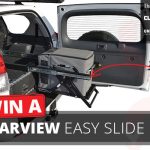 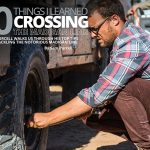