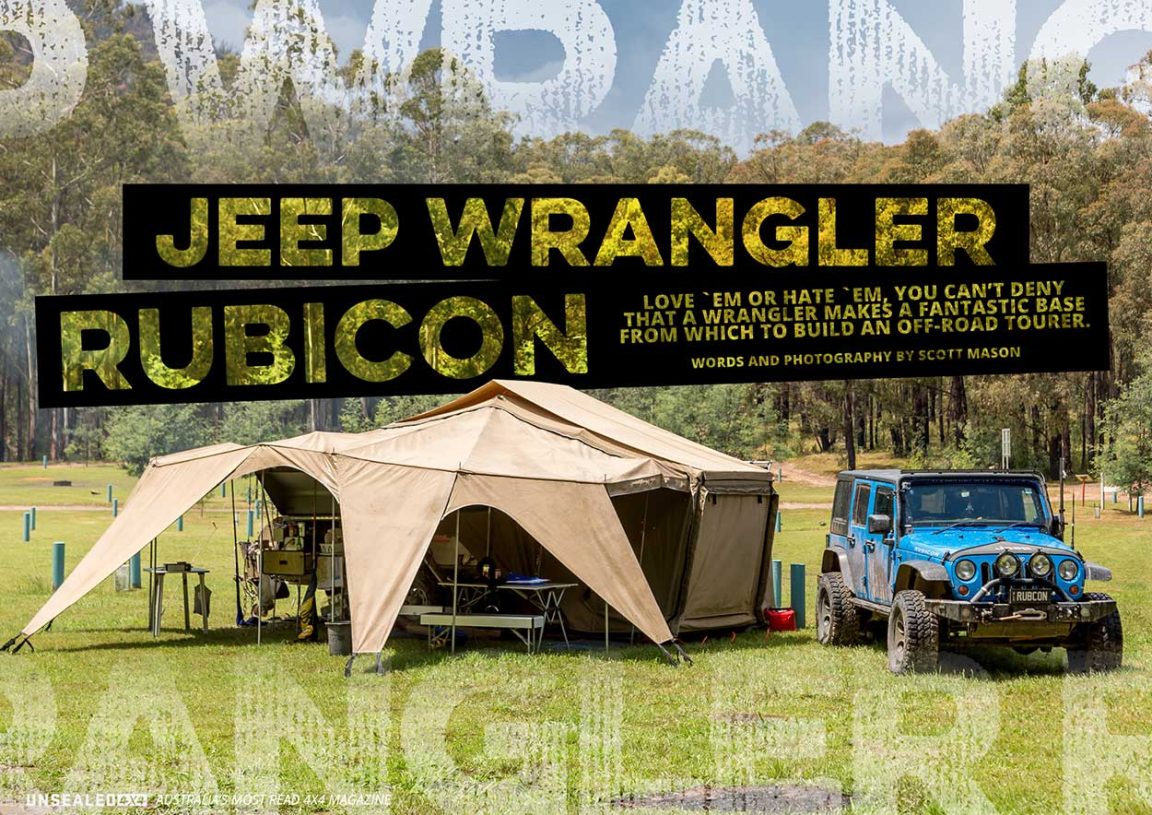 Love `em or hate `em, you can’t deny that a Wrangler makes a fantastic base from which to build an off-road tourer.

To many off-roaders the Jeep brand remains a mystery. There seems to be a divide between those that love them and those that dislike them in equal measure. Whatever side of the fence you find yourself on, it has to be agreed that the popular US marque produces some very rugged and relatively unchanged designs, particularly in the Wrangler and Rubicon. It also cannot be denied that on the back of such a strong US following there is every piece of aftermarket kit imaginable in order to customise your Jeep to your specific needs. They’re essentially a blank canvas that you can build just about anything out of, from an all-round touring rig to a lifted and locked monster… or, as the owner of this particular Wrangler Rubicon has done, a little from column A, and a little from column B. Regardless of whether you love or loathe the ‘Jeep thing’, it’s hard to argue with the fact that this is one well set-up touring weapon. Let’s take a look at how it came together…

For the full Unsealed experience and to see the images with this article, CLICK HERE.

Meet Mark Sorenson. He works in an abattoir and is one of the most passionate 4X4 tourers out there. He loves nothing more than to travel our most beautiful outback destinations, no matter how much blacktop he has to hit to get there, and has built up his Rubicon JK to suit his requirements and destinations just perfectly.

So, why Jeep and what mods has he carried out in order to travel solo with no limits?

Mark actually purchased the very first of the new generation 3.6L Pentastar powered Rubicons in Australia. In fact he had trouble registering it, as the VIN was not recognized on the Aussie system! Just as one may like Nissan, one may like Toyota and one may like Land Rover or any number of available well-built 4X4s Mark has a childhood passion for the old Jeep.

Knowing it was only to be the base of a reliable and capable build he soon embarked on a journey of strengthening and improving, not unlike what any other four-wheel driver would do.

When it comes to Jeep Wranglers, the pick of the bunch is undoubtedly the Rubicon models. Named after the famous Rubicon Trail in the States, these things are one of the most capable out-of-the-box four-wheel drives on the planet – there’s a good reason they’re the most popular 4X4 in the land of fully automatic handguns and gallon milkshakes. Apart from the Rubicon stickers, they look identical to other Wranglers, but, as they say, the devil is in the details…or should that be differentials?

The Rubicons come from the factory with front and rear Dana 44 diffs, which are exponentially beefier than the usual units. They also feature electric lockers, and 4.1 gearing, making them just about perfect for off-road use straight out of the gates. The ‘Rubies’ also have much lower transfer case gearing, rock sliders, removable doors and 32in muddies, all from stock – they’re practically begging you to take them into the rough stuff.

But even with all this capability available with a turn of a key, it wasn’t enough for Mark. While the Jeep engineers had done an admirable job, things just weren’t up to his own standards, so he took matters into his own hands…

The factory suspension was quickly binned and replaced with an AEV 3.5in Premium lift complimented with Bilstein shocks and Offroad Evolution lower control arms.  Rear airbags were installed along with a very notable and Mark-designed airflow valve proportioning system to enable cross-flow of air in the rear air bags to improve rear end flex – and hence improved ground-tyre contact.

Having owned many 4X4s in the past Mark knew the importance of protecting the underbelly so EVO lower control arm skid plates and full belly protection kit was next on the list along with ARB differential front covers. The factory rolling stock was replaced with 315/70/17 Pro Comp tyres mounted to Savegre alloy rims. According to him a much more reliable and suitable style of tyre for driving the tougher tracks.

With the adjustment to ride height Mark was aware the steering was going to be affected so he installed an AEV high steer modification kit, taking the stress off driveline and steering components. A separate Pro Comp front driveshaft was also added for strength and correction of pinion angles. Like any other vehicle, for every one modification you have to make three more before it works.

With the modification list already sounding the alarm of cash registers (don’t we all know it!) it was without hesitation the factory rear axles were replaced with Pro Comp chromoly items mated up to the tough factory front and rear differential lockers, Mark has at times had to put some serious lean on the driveline towing his camper out of some very wet and slippery campsites in the Victorian High Country and up the Cape and has experienced no mechanical issues whatsoever.

As mentioned, there is no denying the fact that Jeep has got some of the setup right for serious off-road driving right from the factory. The barwork is particularly notable. Mark opted for the factory optioned Mopar bullbar, rock sliders and rear bar. Now these are some serious pieces of equipment capable of handling the most serious knocks. Next on the list of many is lighting – or turning night into day. A Baja 52in lightbar dominates the roofline. Fitted on a Rugged Ridge mount it throws out enough light to tackle tracks with confidence when he arrives late into a campsite, which is often the case, as he regularly spends hours in any particularly beautiful scenic place along the way taking in our natural landscapes.

Enjoying our remote places has taught Mark how to travel comfortably and safely. With this in mind the interior copped a 300W Inverter has been installed along with 12V USB and cig lighter type ports throughout the cabin to suit off-road navigation, phone and charging devices. An 80 channel UHF is fitted along with dual battery monitoring and multiple Anderson plugs.  The rear cabin is still a work in progress but is currently decked out with Outback rear drawers, portable fire extinguisher and multiple 12V outlets and light switches along with a fridge and slide.

It is comforting to know that no matter what you drive there are dedicated individuals out there that create their own ‘Nirvana’ no matter what platform they start with. That is the beauty of off-roading, we all share the same common interest and passion. Next time you cross paths with a Jeep owner make sure to wave and say G’day, we are all the same at the end of the day, only with different tools!

Words and Photography by Scott Mason 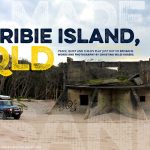 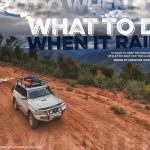