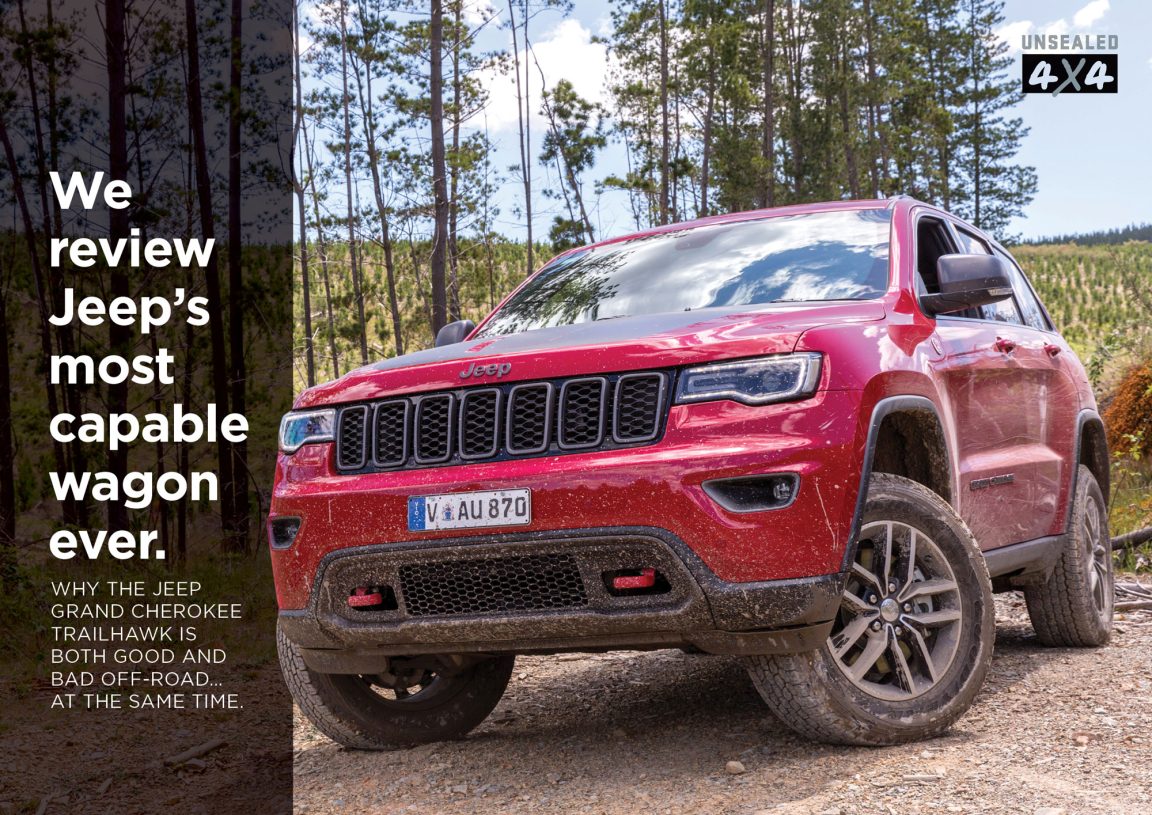 Why the Jeep Grand Cherokee Trailhawk is both good and bad off-road… at the same time.

Coming out in 2011, the Grand Cherokee WKII hit sales records like a bull at the gate.

While the WK Grand Cherokee couldn’t plug past 1,400 sales, the WKII debuted with 3,374. It kept climbing too, peaking at 16,582 in 2014 and doing the unthinkable – outselling Toyota’s Prado. Reputational and reliability questions, along with a rising American dollar, have reversed the growth lately… but the Grand Cherokee is still a big volume seller.

The Trailhawk is the off-road oriented Grand Cherokee, which Jeep thinks gives the model more off-road capability than ever. It’s also loaded with lots of spec, especially when you consider the asking price. Let’s get this thing off-road.

The Trailhawk does get some genuine improvements for off-road performance. The Goodyear Wrangler all-terrains are a huge improvement over the typical highway terrain tyres you get on stock 4WDs, and they make a significant improvement off-road. The underbody is also well taken care of, with everything tucked under some decent protection. Overall ground clearance is great, and you can also remove the front valance for even more approach angle.

The Trailhawk has an automatic electronic rear locking diff, which works really well in conjunction with the centre diff (also locking) and intuitive traction control. Where the Trailhawk loses points however, is through the suspension. It’s really great to gain all of that clearance underneath, but not so much when you lose the little travel you had to start with – and have egregiously firm suspension for your off-road driving. The car lifts wheels like there is no tomorrow, and you lose any semblance of stability in rutted, off-camber situations. For this reason, the car depends heavily on its traction aids to keep rolling.

Up to 260mm of ground clearance is available through the Quadra-Lift suspension system, which is specially tuned for the Trailhawk. Jeep reckons there is ‘improved articulation and suspension travel’; we think they’re comparing that to a Coles shopping trolley, because in our testing there was precious little travel on offer. This became even worse on ‘Rocks’ mode – when the airbags at full extension had zero droop to offer, and felt rock-hard.

The good news here is that air suspension can tweak itself up aplenty for a combination of good on-road and off-road manners. The Grand Cherokee sticks to the road really nicely, staying quite flat through corners. The Goodyear all-terrain tyres do squeal and lose grip a little, but we did notice that these do grip noticeably better than highway terrains off-road.

The Trailhawk only comes with the 3.0-litre V6 diesel, making 184kW @ 4,000rpm and 570Nm @ 1,800rpm. Running through an 8-speed automatic gearbox, it’s a great performer. It’s very quiet, and only gives you a puff of lag off the line. You can cure a lot of that lag by pressing the sports button, which definitely quickens the throttle response. Coupled with firm but forgiving suspension, the Grand Cherokee is a well disciplined all-rounder.

It’s a steel unibody design, sharing a platform with Mercedes SUVs. Because it has been such a good seller over the years, there is great aftermarket support for the WKII. There’s barwork front and rear, and internal storage solutions. Don’t be afraid to look beyond the big aftermarket guys, as well… there are some great options amongst the more ‘boutique’ sellers out there.

The interior of the Grand Cherokee in this Trailhawk form is pretty swish, especially for the money. You can tell the Grand Cherokee isn’t as big as perceived competition when you’re sitting inside, but you’re very comfortable. The seats are electric, heated and ventilated – and they tread a nice line between bolstering and cushiness.

WHO IS THE COMPETITION?

Truth be told, the Grand Cherokee doesn’t necessarily compete with the Discovery or LandCruiser: It’s too small, and can’t seat seven. But on the other hand, the Jeep gives you tonnes more bang for your buck. Other vehicles like the Prado and Everest are similarly sized and priced, but can also seat seven. Where the Jeep’s strengths lie are with its inclusions, and the very refined ride and drive it offers. It’s great off-road as well. Not incredible, though. I would rate both a 200 Series LandCruiser and Discovery as better. If you’re looking at something like a Prado, but really don’t need the seven seats, then the Grand Cherokee has lots of potential to offer you. side of things. 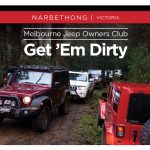 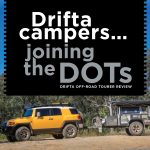