4WD shows, generally speaking, are really hard work when you are an exhibitor. I’ve done many of them over the years, in various capacities too; from selling product to taking photographs or even just lugging stage and PA equipment around in my youth. I’ve never been to the Brisbane 4WD show though, and have to say I had a great time. The location is perfect; the amount of exhibitors was immense with some genuinely exciting new gear and accessories coming out.

The general vibe of the show was delightful, basically. Everyone was polite, happy, in no real rush and the weather was consistently stunning. Well, for someone who lives in the NSW Blue Mountains and doesn’t get to see the sun that often. The vehicles on display were first-class too; I almost got sick of looking at custom 79 Series LandCruisers. Almost. The stage was always packed when it was time for presentations as well; it’s great to see the hunger for knowledge asked of the people who are out living the lifestyle daily.

While Unsealed 4X4 didn’t have the biggest stand this year, what we did have was our range of T-shirts and other merch we’ve been rolling out. This will only get bigger for the next shows, as we now know what you guys like to wear. We sold out of 40 Series LandCruiser shirts on the second day, for example, so it’s safe to say we’ll be printing a few hundred more of those.

So to anyone who stopped by, said g’day, bought a shirt or passed on some feedback, we say thanks very much. I’ve not done the Perth 4WD show yet, so will check that out later in the year, but it begs the question: which is the best 4WD show you have attended in Australia? 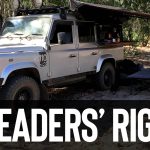 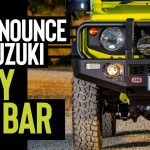