Halogen driving lights used to be all the rage and then along came HID and now there’s LED, here’s everything you need to know about Halogen, HID and LED driving lights.

It’s the question that gets both Facebook know-alls and armchair experts up in arms just about every day: which is the best lighting technology for spotlights? Interestingly enough, the question is a lot more subjective than you may realise, where understanding the technology and the way light is generated will allow you to choose the best lights for you.

In this article, we’ll look at the different technology of the lights most prevalent on the market. In a follow-up article, we’ll take the lights out into the night and run some testing on their light output, power usage, heat issues, and which works best in which situation.

We’ll start with the grandad of the lot: Halogen incandescent bulbs. Halogen bulbs have been around for a very long time; they are the simplest of our lights. The bulbs are sealed (not to be confused with ‘sealed beam’ lights) and have a wire filament (usually made from tungsten) between two pins. Within the sealed bulb is an inert gas mixed with a touch of a halogen gas (usually iodine or bromide). The halogen in the bulb assists in keeping the tungsten together and allows the bulb to burn brighter than a standard incandescent bulb, and last longer too. 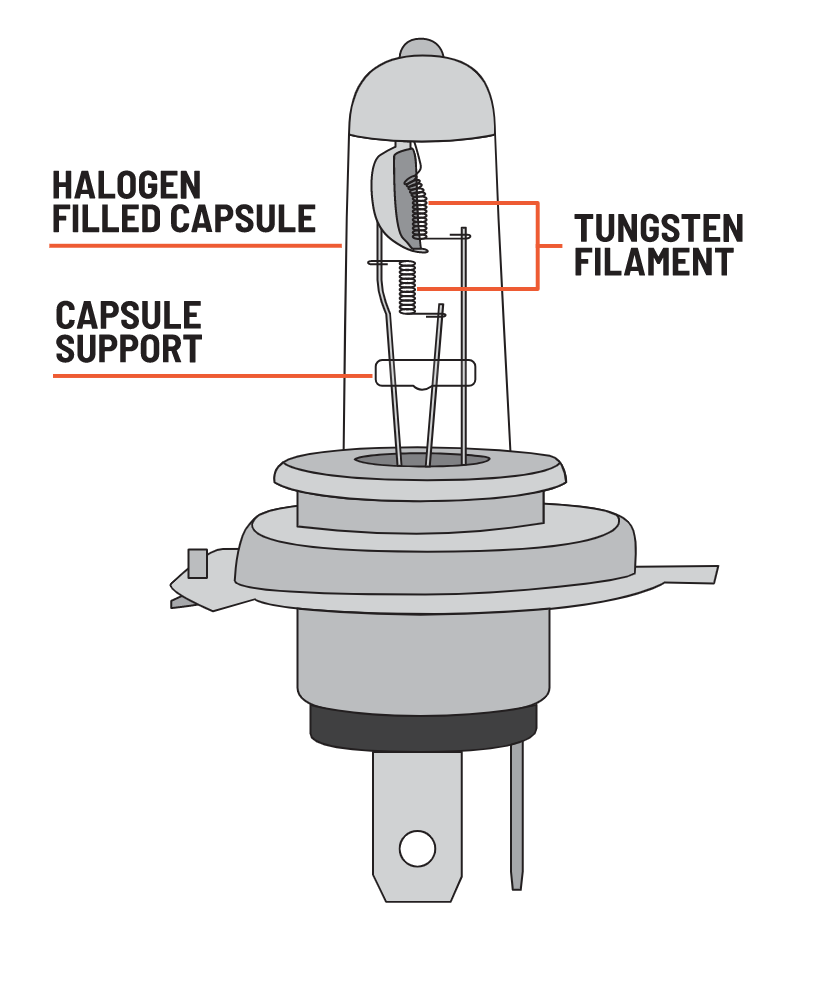 They are very inefficient (insofar as power usage vs light output is concerned) and are being phased out for use in your home. They are still available for use in automotive, however, and are still in use by many light manufacturers.

High-Intensity Discharge (or HID) is the newer kid on the block for production lighting. The mid-2000s saw many vehicle manufacturers switch to HID; however they have since (mostly) been replaced by LED headlights, but there are still more than a few HID spotlights on the market, as they work rather well for their intended use. 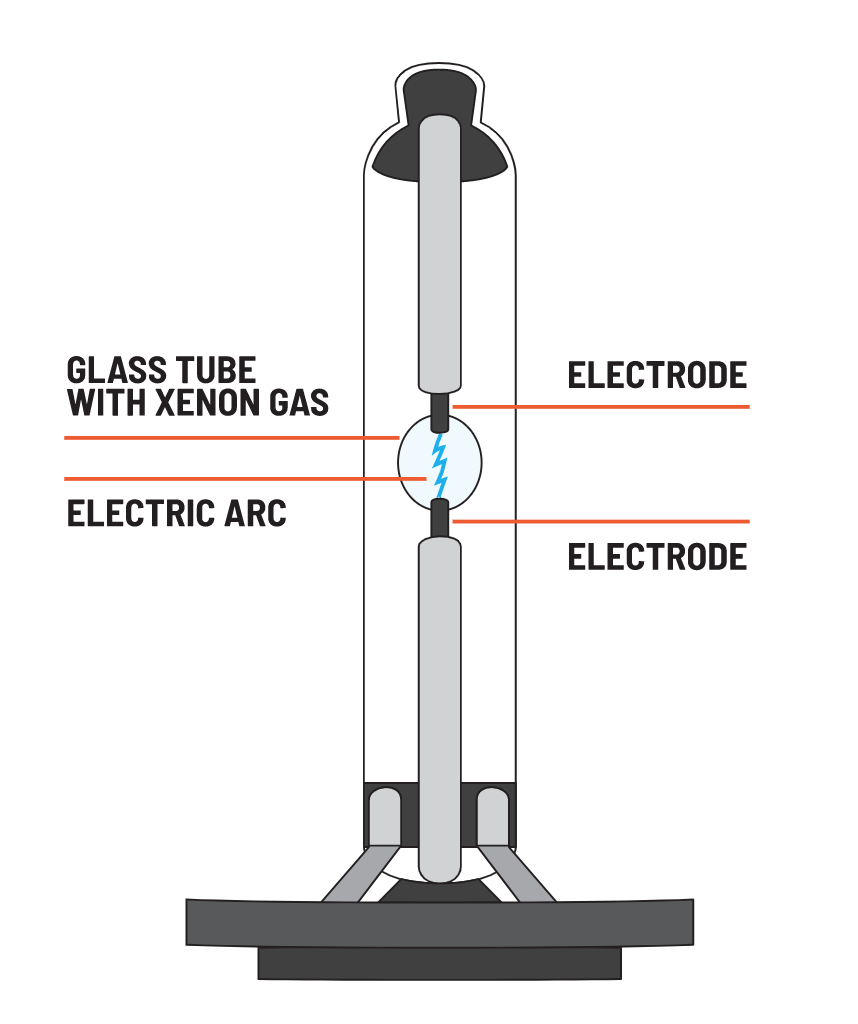 HID lights work by passing a massive amount of volts between two tungsten electrodes, creating an arc. This is housed within a transparent quartz or alumina arc tube, which contains a noble gas; most commonly being Xenon. The Xenon gas within the arc tube assists in increasing the brightness of the arc, and also controls the colour of the arc, and thus the colour temperature of the light output. Interestingly enough, different noble gasses offer different colours when an arc passes through them.

To create and maintain the arc, HID lights require an electrical ballast; similar to what your average Fluro lights have (the little white round ‘starters’). This pushes the voltage up, often over 30,000 volts, by reducing the current going to the lamp.

As we said above, vehicle manufacturers are stepping away from HID in their standard lighting systems, in part due to issues with the ballasts wearing out. Also, that lighting output can deteriorate by 70 per cent over a 10,000 hour usage period. This isn’t as critical in spotlights, as most users of these light systems do not run them the entire time the car is on during night hours, unlike headlights.

Pub fact, HID, or in this specific case arc lighting, is no new thing, being first demonstrated in 1705 by English scientist Francis Hauksbee.

Light-Emitting Diodes (or LEDs) are no new thing. They’ve been around since the 1960s, and are probably the most efficient and simple of lighting options. 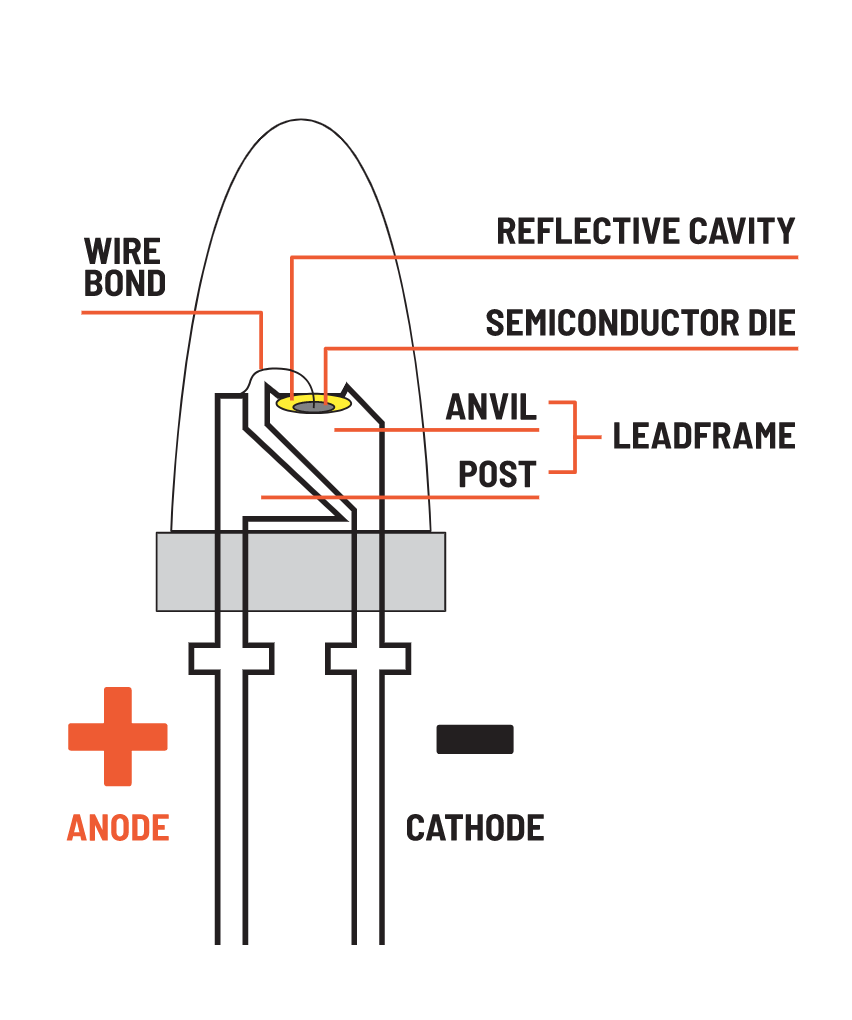 Within the LEDs we see used for spotlights, the white light is created by using phosphor within the LED, which generates a white light, and makes the LED appear a yellow colour when turned off.

The use of LEDs in spotlights, and indeed general vehicle lighting (both for Daytime Running Lights (DRLs) and headlights) has grown considerably over the past decade, as more and more people have taken up the technology, and more investment is being made into the research and development of LEDs. It wasn’t that long ago where a 5-watt LED was considered huge, whereas now 10-watt is becoming the norm, with some LEDs of up to 20-watts being utilised in lighting.

Possibly the most significant factors of LEDs is that they are relatively simple, inexpensive to make and are a solid-state bulb. There are no filaments or gasses needed to create light; so they’re more robust next to their counterparts. They also have a massive lifespan, upwards of 50,000 hours burn time.

Efficiency is where they shine (pun intended), with LEDs being able to put out comparable light one-fifth the wattage of a halogen globe; thus we see more and more LED lights used in commercial and housing developments.

BUT WHICH ONE’S BEST?

You’ll have to wait until our follow up article which will be in the next issue (Issue 70), where we’ll go and put the three different technologies side by side, and test them. We’ll then give you the benefits of each globe, and how they compare against one another.

To make things as fair and even as possible, we’re going to use three sets of lights from Narva. They’re a well-known quality brand that has lit the way for many an Aussie adventurer over the years, plus, they are one of the few brands that still manufacture lights from all three technology stables. Stay tuned.

This article was originally published in Unsealed 4X4 Issue 69 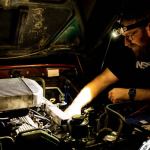 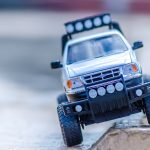