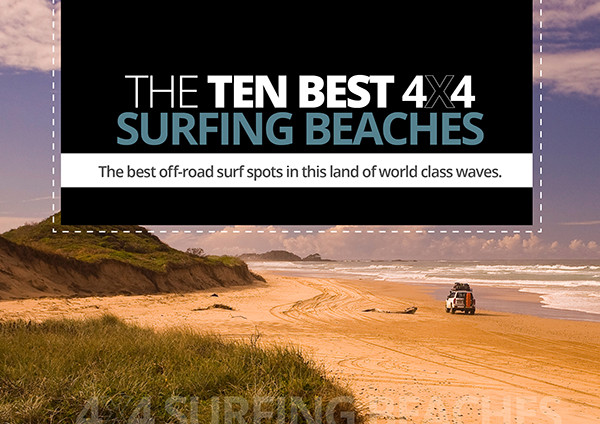 For the full story in Unsealed 4X4 CLICK HERE

Affectionately called K.I by the locals, Kangaroo Island is home to superb waves, many of which are only accessible by 4X4 or a decent hike.

You’ll need your wits about you as gigantic swells regularly pound the island. Chances are you will be surfing by yourself, except for the abundant seal population… and the great white sharks hunting them.

There are waves right around the island, meaning that whatever the swell/wind combination there should be somewhere to surf that suits your taste.

If you like the taste of blood, there are plenty of heavy waves around, with the remote southwest copping the most swell. Pack your testicles.

On the northern tip of Queensland’s Sunshine Coast lies Double Island Point, a short $7 ferry ride across the Noosa River and a one hour cruise up the beach – or longer and less comfortably at high tide. Alternatively, take The Freshwater Track from Rainbow Beach Road.

The southern side of the headland offers protection from the summer northeaster, classic beach breaks and a dangerous rip.

Churn through the cutting to the northern side and Rainbow Bay is protected from a southerly wind and needs a big east or northeast swell to work. It can dish up some of Australia’s longest waves.

Beware – many a fourbie has been lost to the sea on the Rainbow side.

A couple of hours north of Sydney lies NSW’s longest beach, which is accessible by 4X4 and offers kilometres of potential waves.

Hoovering up south swell, the north end of Stockton can really turn it on, although it is fickle and has a reputation for great white sharks.

If the waves are poor, go dune surfing or drive down the beach until you find a better sandbank – although be sure you don’t get trapped by an incoming tide.

There are two entrances onto the 31.8km beach, although tracks and camping have been restricted since the 2012 storms. Access is currently under review with, keep an eye on Unsealed 4X4 magazine as we bring you the most up to date news on Stockton access as it unfolds.

Are you looking for a 4X4 mecca that sucks up any available swell and delivers it as warm water wonders reeling down pristine beaches dotted with scantily-clad Swedish backpackers?

Say hello to Fraser Island. The only drawback is the waters are a breeding ground for sharks, with massive schools regularly spotted hunting the abundant fish population.

Indian Head has excellent waves, as does Waddy Point and Champagne Pools when it’s smaller. Conveniently, these locations are also frequented by said Swedish backpackers.

If you do brave the waters you are likely to catch waves leaving you with a smile bigger than the Tiger Shark
that was circling you.

Tombstones – as the name suggests – is a serious wave with a heavy barrelling takeoff, pitching over sharp coral and gurgling endlessly down the line. Low tide can be deadly.

It’s not all death pits and hellmen though, when it’s two-to-four foot, there are plenty of fun, workable walls to be had.

Basic camping is available at the nearby Three Mile Camp, and countless 4X4 trails (and waves) are waiting to be explored in the surrounding coastal desert and dunes.

While Seal Rocks itself does not require a 4X4, like most things, the real jewels in the crown are found when you lock in the hubs.

Whether you camp at Yagon, Mungo Brush or the more refined Treachery Camp, there are tracks snaking in and out of dunes and onto beaches that will take you to countless options – reef and beach breaks, mellow and heavy.

Whatever the combination of wind, swell and tide, you’ll be hard pressed not to find waves to your liking in these parts.

One hour south of Eden in Ben Boyd National Park lies one of the East Coast’s most idyllic camping spots, Saltwater Creek. It is also home to a seriously good right hand point break.

Protected from a southerly wind, and needing a solid swell to come to life, Saltwater can break for up to 300m with long walls and barrel sections.

When it’s not breaking, there is fantastic fishing and coastal walks from this intimate campsite that books out early during holidays.

You’re unlikely to need 4X4 in the national park (except after heavy rain) as the dirt roads are well maintained, however there are plenty of trails to play on in adjoining state forests.

Found about an hour’s drive north of Margaret River in WA, Three Bears is only accessible via some pretty serious off-road antics.

Papa, Mama and Baby Bear are three waves, all in close proximity and breaking with various levels of intensity corresponding to their names.

Nearly everyone has a fourbie in these parts and it can be crowded when it’s on – especially weekends. If it’s packed, jump in your car and go exploring, there is plenty of excellent coastal four-wheel driving and many a pro surf video has been filmed in the waves around here and Margaret River.

Waves abound here with the world famous Cactus Beach a key drawcard, while nearby Caves, Castles, Crushers and Supertubes ensure plenty of options.

Open to the full force of regular Atlantic storms you’ll be unlucky not to score, although it can be windy. Autumn is the best time to go for the highest probability of offshore winds and solid swells.

Ensure you have a reliable 4X4, plenty of gear, food and water along with a decent first aid kit. A Shark Shield wouldn’t go astray either.

Do you like adrenalin? If so, tackle one of Tasmania’s heaviest waves accessed by one of its most notorious 4X4 routes. Climies Track begins (or ends) in Granville Harbour and hugs the west coast as it meanders south through serious 4X4 territory before popping you out at Trial Harbour where a thick, heavy and unforgiving wave is waiting to eat you.

Huge waves travel from Antarctic storms and consistently erupt at this eerie lefthander which breaks over shallow reef, delivering either the barrel of your dreams, or your nightmares.

You’ll need a northeasterly wind, a thick wetsuit and a wingman with gonads as large as yours. 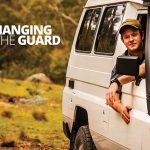 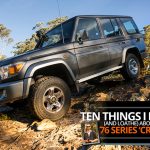