Ford has remained notoriously tight-lipped around when we might see the fully electric F150 Lightning here in Australia. However, given how quickly it sold out in America, Australia’s on-again-off-again love affair with the ‘Effie’ and the increasing popularity of USA style pickups, there is no denying that demand is already here.

Although we don’t have any official news, some internet sleuthing has uncovered that on May 11, Ford filed an F150 Lightning and other potentially related trademarks with IP Australia. Could this mean the F150 Lightning is getting closer to Australian shores? Could it be one of the five electric models promised by the end of 2024? Ford has said in the past that patent filings aren’t necessarily an indication of new product plans … but I certainly hope so!

Based on the USA Ford F150 Lightning, here’s what we can expect in Australia.

Springsteen’s Born to Run would be an apt theme song for the F150 Lightning with its reported sprint speed of around 4.5 seconds to reach 100km/h. According to Ford, the Lightning has superpowers that only electric can deliver. Two motors power all four wheels for 4X4 performance, delivering 318kW of power across the standard range and 420kW in the extended range. The torque is monster at 1051Nm.

Ford have acknowledged that most F150 Lightning drivers will be towing and carrying weight and as such, the targeted maximum towing capacity is currently stated as 4535kg with a targeted maximum payload of 907kg.

This Effie has a frunk

Given the absence of a traditional engine, this Effie has a frunk as well as a tray. Sounds sweary doesn’t it? If drive-in movies were still around, this frunk would make it super easy to sneak in, providing your friends can pretzel themselves into the 400L space. With a USB port for charging devices and lighting, it would be much more comfortable than the trunk of my older brother’s Ford Fairlane that I had to hide in when I was a kid.

Interesting to note, Ford says the frunk can double as an esky as it’s both washable and drainable.

The driving range is promising … if it’s accurate

The F150 Lightning will charge fast when plugged into a DC fast-charger that can handle 150kW. This will get you from 15 per cent to 80 per cent in 41 minutes for the extended range battery pack and 44 minutes for the standard range pack. Although we don’t yet have the infrastructure Australia wide for this, Ampol is forging ahead with its network of fast chargers.

A Ford Charge Station Pro installed at home will allow you to charge overnight in eight hours and a mobile power cord with a 240V connector takes around 20 hours. The driving range is between 370km and 483km, depending on whether it’s equipped with the standard or extended range battery.

Debuting on the F150 Lightning is the Ford Intelligent Backup Power. This will turn your truck into a power source for your home during an outage. With the ability to offload up to 9.6 kilowatts of power, you’ll be able to keep the lights on and home appliances running in an emergency. According to Ford, it can power a house for up to three days.

The truck itself has a Pro Power Onboard feature in which owners can use built-in electrical outlets to directly power their tools, appliances and electronics away from home.

The F150 Lightning features an array of intelligent features that improve over time via over-the-air software updates. It’s also the most aerodynamic F150 ever, with newly shaped running boards, a sculpted hood and grilles to replace air intake holes.

Australia’s relationship with the Effie has been long and rocky, dating back over 70 years with the introduction of the F1 in 1948. Is now the F150’s time to shine? Only time will tell.

Read next: Jeep is set to launch the new plug-in hybrid Grand Cherokee 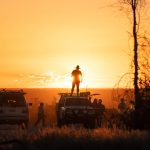 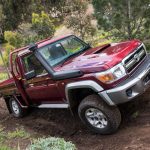