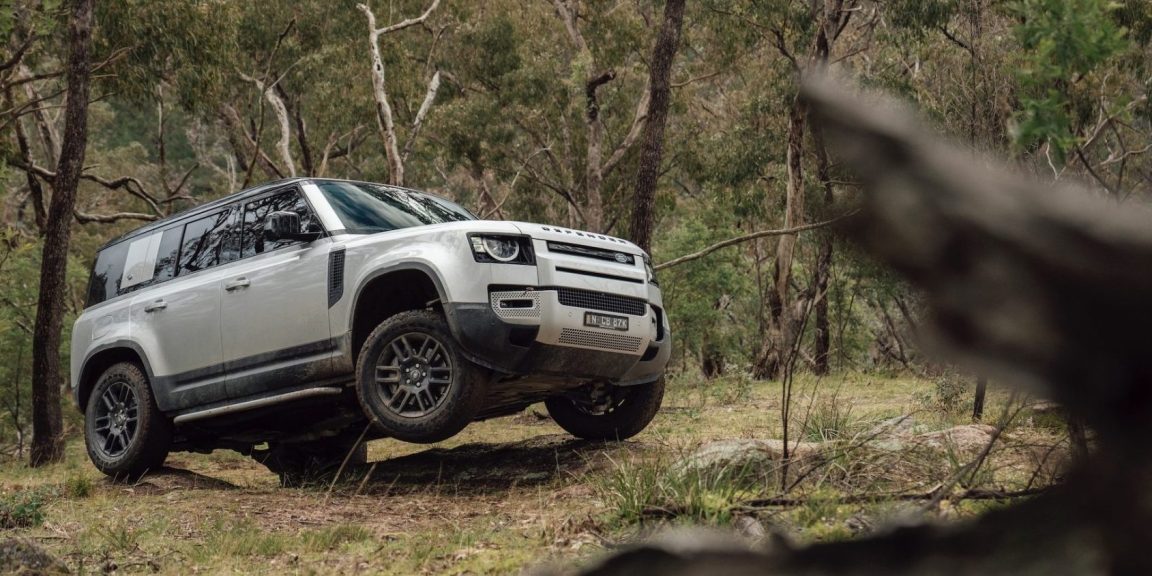 It’s been a long wait but the New Land Rover Defender has finally landed in Australia… and we’ve driven it.

The New Land Rover Defender has finally landed in Australia and, as we teased yesterday, Unsealed 4X4 was lucky enough to get behind the wheel on a fantastic on- and 0ff-road test drive west of Sydney.

As Land Rover Australia’s allocation of diesel Defenders has already sold out, we sampled the Defender 110 P400, which packs a super-potent 3.0-litre-turbocharged inline six-cylinder petrol 48-volt Mild-Hybrid Electric Vehicle (MHEV) engine that produces a claimed 294kW of power at 5500rpm and 550Nm of torque between 2000-5000rpm. That’s enough to propel the 2343kg Defender from 0-100km/h in just 6.1 seconds, and on to a top speed of 191km/h!

Before I get stuck into the nitty-gritty, if you want to know what the Defender 110 P400 drives like, and you can’t be bothered reading further, here’s a video of it, both on-road and off-road.

At this price, the Defender 110 SE/HSE models are pitched at competitors like Toyota 200 Series LandCruiser VX ($103,396) and Sahara ($124,396) models, but will also likely steal away some sales from Land Rover’s own Discovery… and maybe even the Range Rover Sport.

What do you get?

We’ve outlined exactly what the all-new Land Rover Defender is in previous stories, so we’ll stick to the basics here.

Unlike the old Defender, which had a separate chassis and live-axle coil spring suspension front and rear, this new one is built on a new monocoque platform called D7x. Suspension is fully independent with height-adjustable air springs all-round, with ground clearance of up to 291mm, and an impressive 38° approach, 28° ramp-over and 40° departure angles in Off-Road height. Maximum wading depth is a claimed 900mm and depending on which option boxes you tick you can have your Defender equipped with off-road tech such as Terrain Response 2 with a Wading Sense program.

The Defender 110 is available in six-seat (with a jump seat up front) and seven-seat (with three rows) configurations, and it offers plentiful interior space, with a massive cargo area and a flat load floor with seats folded. Up front, occupants are offered an open dash with loads of storage areas, a huge central Pivi Pro 10-inch touchscreen and the driver is presented with a high-resolution configurable digital instrument binnacle and a ClearSight rear-view mirror that uses a digital screen showing a feed provided by a high-definition rear-facing camera for an unimpeded rear-view even if you have luggage stacked to roof height.

There’s a lot more tech but let’s get down to the driving.

Land Rover says the Defender 110 will climb and descend 45° slopes and that the maximum side-slope traversing angle is also 45°. While we didn’t tackle any such extreme angles on our test drive, we were confronted with some steep descents and climbs, and the Defender handled them all with ease.

Low-range gearing is impressive with an overall crawl ratio in low-first of 57.2:1. In addition, the Hill Descent Control is effective and speed adjustable via buttons on the steering wheel.

Terrain Response 2 offers a number of off-road programs that tailor the vehicle to suit driving conditions, such as ‘Sand’, ‘Mud & Ruts’ and ‘Grass, Gravel, Snow’, and there’s also a new configurable system allowing the driver to set certain parameters and assign those driving modes a name for easy selection when required. Settings are selected via the Pivi Pro touchscreen. At first this takes some getting used to, but all you have to do is press a button on the centre console to bring up the Terrain Response settings on the touchscreen and then select the icon to suit the conditions. Other buttons on the centre console are for selecting low-range or engaging the Hill Descent Control, among other things.

With plenty of ground clearance, effective electronic traction control, and auto-locking centre and rear differentials, the Defender is a formidable beast off-road. The vehicles we drove were fitted with Goodyear Wrangler DuraTrac rubber, and they had no issues with grip despite the damp conditions.

Another stand-out feature is the Defender’s manoeuvrability, with a good steering lock and good outward visibility. And the external cameras clearly show what’s around the vehicle, making it easy to drive in tight spots without hitting anything.

The Defender is also available with an Australian-spec bull bar and the facility to fit an electric winch, out of sight behind the bumper, with a flip-up front number plate to access the winch line.

Just about everyone knows how capable the old Defender is off the road, but it has always been quite compromised on the road, with average performance and less than stellar ride and handling qualities, but this all-new Defender is next-level on the road.

First up, ride quality is superb, even over particularly crook road surfaces. Secondly, the handling is incredible, especially considering the Defender’s 2343kg kerb weight. You can throw the big Defender into corners like a sports car and it won’t complain at all. The steering is well weighted and offers excellent feel, and through long corners body roll is well controlled with the Defender holding its line well. And it won’t get upset if you adjust your line halfway through a corner. I doubt there’s another seven-seat wagon on the market that comes near it in terms of on-road dynamics and ride quality, other than, perhaps, the Land Rover Discovery. 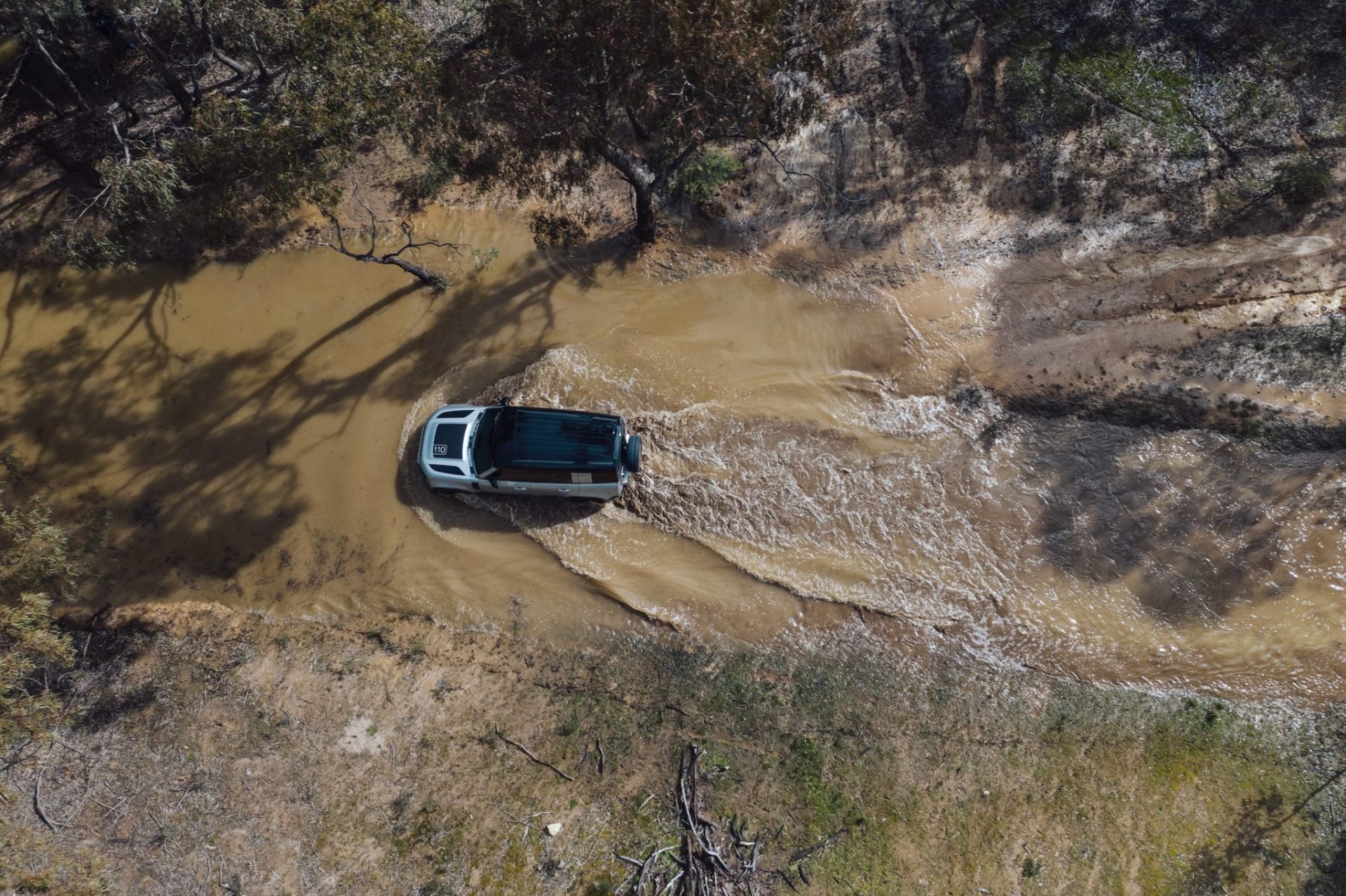 Slip the transmission into ‘Sports’ mode and it sharpens up gear shifts and lets the boosted petrol six-pot deliver its best. With loads of traction available – thanks to the full-time 4×4 system and the torque vectoring – the Defender fires out of the corners with enthusiasm. I tell you, there’s not much chance I’d lose my licence for speeding in my old 1994 Defender, but in this thing I’d really need to be careful – it’s just so much fun to drive on a nice twisty road.

What about touring? On the open road it’s quiet, refined and relaxed. Combined fuel consumption is listed at 12.2L/100km for the P400 (seven-seater) and with a 90L fuel tank you could expect a touring range in excess of 700km. The diesel variants have an 85L fuel tank (with a 20.7L AdBlue tank) but a 9.6L/100km combined fuel figure, so would likely do close to 900km between refills.

There’s so much more I want to tell you about the all-new Defender… and we have a longer test lined up in which we’ll do that, so keep an eye out. But for now, I can state quite confidently that there aren’t many other vehicles that so competently combine off-road capability with on-road dynamics as the new Defender does.

Ground clearance: up to 291mm 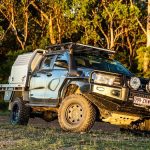 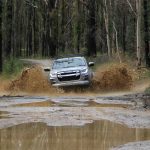