Chances are you’re about to do The Cape or Madigan Line and you’ve got your map out and are looking for fuel stops along the way. Thanks to all the fuel-carrying options that are now available, gone are the days of having a local run out a 44 gallon drum to you at the halfway mark with a hand pump. In this guide we take a look at the best options for storing and carrying fuel from long-range replacement options and fuel bladders to the legalities around jerry cans.

Jerry cans are the old faithful for carrying fuel. Everywhere you look, chances are you’ll see a jerry can on a rear bar, on a camper-trailer drawbar or up on the roof rack of a touring rig.

Jerry cans are cheap, simple and easy to carry – though you need to remember that most places you’re going to store a jerry can will be higher than where the standard fuel tank is, which will raise your vehicle’s centre of gravity. This is not ideal, for obvious reasons.

Legally, you can carry up to 250L of fuel in jerry cans on your vehicle (this includes your camper or caravan, too). That said, a 20L steel jerry can weighs about 4-5kg, so when you add around 17kg worth of fuel to it you’re looking at 22kg per jerry can, so 12 of them on the roof is probably not going to be the greatest idea in the world. Besides the roof cage crushing the roof or gutters in, chances are your 4X4 will fall over as soon as it sees a high-speed corner simply due to all the weight up there!

Jerry cans with petrol in them can’t be mounted on the front or rear of your vehicle, inside the cab, or rear of caravans or campers – essentially anywhere that is an impact zone. In the back of a ute is just about one of the only places for them. Jerry cans with diesel in them, however, may be mounted essentially wherever you like (within reason), as it’s not classed as a ‘combustible/explosive liquid’ in the sense that petrol is.

An interesting bit of pub ammo for you: jerry cans were named after ze Germans. In World War Two, for mobile fuel storage, the Germans had a better design than the cans used by the British forces which were known as ‘flimsies’ because they regularly leaked and caused fires. The Brits captured and used a large number of German jerry cans in the war in North Africa, and eventually copied and mass produced them in England. The more you know…

For a decent quality Proquip can, expect to pay about $25 for a plastic jerry can or $50 for a metal jobby.

The next most common way of carrying fuel is with a long-range replacement tank. Long Range Automotive, The Long Ranger, and ARB have been building these for years, and cover just about every vehicle imaginable. Most tanks are a metal design, which replaces either the main tank or sub-tank or both. although ARB Frontier fuel tanks are made of a tough plastic material like most OE fuel tanks.

For example, The Long Ranger offers several solutions for a vehicle such as my 80 Series LandCruiser. Options I have are to replace the main 90L tank with a 140L tank, or the 50L sub-tank with a 160L tank. The only compromise here is that I’d have to remove my spare wheel from under the rear of the LandCruiser and move it to a rear bar carrier, which I have already done. Bear in mind The Long Ranger tanks are not a mass-produced Chinese things; they’re cut, folded, welded and painted in a workshop out the back of Newcastle, in Barnsley, NSW.

One advantage of long-range replacement fuel tanks is that fuel storage is a lot lower than if you had jerry cans on the roof, so the centre of gravity of the 4X4 is not affected. Most of the tanks currently on the market use pre-existing mounting holes and OEM fillers and pickups, so installation isn’t the hardest thing in the world to do, and you don’t have to change anything around from factory besides the actual tank. Most are even made to accommodate a 3-inch exhaust, which is the most common modification that would otherwise get in the way.

With many modern diesels being crippled by technology and environmental rules, big V8 petrols are seeing a resurgence in sales led by the big American utes and, along with the vehicles like the petrol-only Nissan Patrol, a long-range fuel tank becomes an essential addition to cover the miles when outback touring.

Expect to pay upwards of $1100 for a long-range replacement fuel tank dependant on brand and model, and it’ll take about three hours to fit it, so call it around $1500 drive-away.

Fuel bladders and cubes are another way of carrying fuel. These are, respectively, a flexible poly bladder or a poly-cube.

Bladders range from 10L capacity up to 1000L. Depending on size they can be stowed under seats or behind draw systems where there is no specific shape to conform to, or a shape that is so irregular that it’d be near impossible to have a tank fabricated to fit.

Fuel cubes are 40L-100L poly tanks that sit on a roof rack or cage, or in the back of a ute, and replace 20L jerry cans. Depending on where you put them, they will raise a vehicle’s centre of gravity just like jerry cans.

Both bladders and the cubes generally have a simple gravity feed system, although some have a small 12v pump that is used to pump fuel into the normal fuel filler from the bladder or cube. Bladders are quite inexpensive and can be had for around $235 for a 100L unit, whereas a Boab fuel cube will cost around $295 for a 55L model. 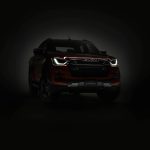 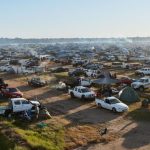