We often head away on trips with our mates and everyone will usually have a different idea on how convoy etiquette should work. Well, here’s everything you need to know about keeping a group together and ensuring no one gets lost on your next off-road adventure.

Convoy etiquette is one of those things we don’t think about until we’re in convoy and everyone has their own idea on what do to, at which point it generally goes belly-up pretty quickly. Someone’s pulling up for lunch at 11.30am, you’re not sure who the last vehicle is, you don’t know if it’s left or right at the next turn, you’re climbing a hill with someone’s bull bar just about touching your tow bar, and things are getting real frustrating, real quick.

No matter what procedure you decide on, the first thing you should do to ensure everyone is on the same page (and the same track) is to have a little get-together before everyone heads off to agree on how things are going to run and that everyone understands convoy etiquette.

Have a way of communicating

If you can’t chat with those in your group, you’re going to have problems. If you’re taking a new four-wheel driver on a trip, and they’ve not organised comms, or their UHF is on the fritz, it’s best to put them in the middle of the group. So if anything happens, tail-end Charlie can pick them up and radio forward. That is also true for the leader, to radio back any oncoming vehicles and how many. Use comms; it will help keep your group safe.

Have a leader or person-on-point

Generally whoever organises the trip, or has the least vague idea of where you’re heading, should probably be the leader. They get to be up the front of the convoy, dictate the speed and are generally the one with the most responsibility. They’ve got navigation and comms sorted, and it’s someone to blame if you all end up hopelessly lost – this is where the adventure starts.

Have a tail-end Charlie

Tail-end Charlie is the last person in convoy. They’ll need to have comms and they’re the person the leader can contact to make sure that everyone has turned at the right spot or made it through an obstacle.

If you come to an intersection, you want to mark your corners. That means that you will want to wait at the corner until you have the vehicle behind you in sight so they see which way you turn. After direction changes, the leader will often slow down until whoever is on tail-end Charlie duty calls up to say they have made the turn, allowing the group to close up again after a long run. Give a bit of room

On harder trails, especially when a climb is involved, give the vehicle in front of you a bit of space. The last thing they’ll need when trying to negotiate a wombat-holed, off-cambered, near-vertical climb is the four-wheel-drive behind them trying to push them up a hill. Especially if they need to reverse back and have another go at an obstacle. It’s easier to reverse one four-wheel-drive down a tight track than five trying to do it in concert. Synchronised reversing, anyone?

Leave a bit of room, too

The above also rings true for water crossings and muddy holes. It’s better to have one stuck four-wheel-drive than two. Or three. If someone is going to get stuck, it’s easier to recover a vehicle from solid ground; if you’re halfway across a crossing and the vehicle in front gets stuck and stops, this means you too must give up your momentum and will likely get stuck. Leaving a bit of room also allows you to pick a better line.

If you’re in a transport stage, and you’re barrelling down the Peninsula Development Road (PDR), back off a touch. This keeps your vision clear of dust and also stops your engine and cab sucking in a gutful of dust from whoever is in front of you. Safety is paramount and is often part of the reason we travel in groups.

Lead vehicle opens gates, tail-end Charlie shuts them – this shouldn’t be news to anyone. If you travel through a gate or fence line, make sure you leave it how you found it.

Especially so on the PDR and on more remote outback roads, call any obstacles you see. The PDR is notorious for dust holes that usually have a 30cm lip on each end, and run for 20 metres. If you see one, call it out. Same for aggressive causeways and rocks, or in some cases boulders on the road. If you are at the front, and there’s another convoy or even solo vehicles heading the other way, announce them; “four oncoming vehicles – last vehicle white Triton”. That way everyone knows the last oncoming vehicle is a white Triton.

The most crucial point is to have fun. If we’re in convoy, chances are we’re with mates, or on a tagalong. You’re out touring and exploring this great country of ours, so enjoy it. If someone is missing a bit of etiquette with their convoy procedure, when you pull up for a break, have a yarn and talk the ideas through. No one wants to be the one person who upsets the apple cart. 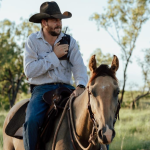