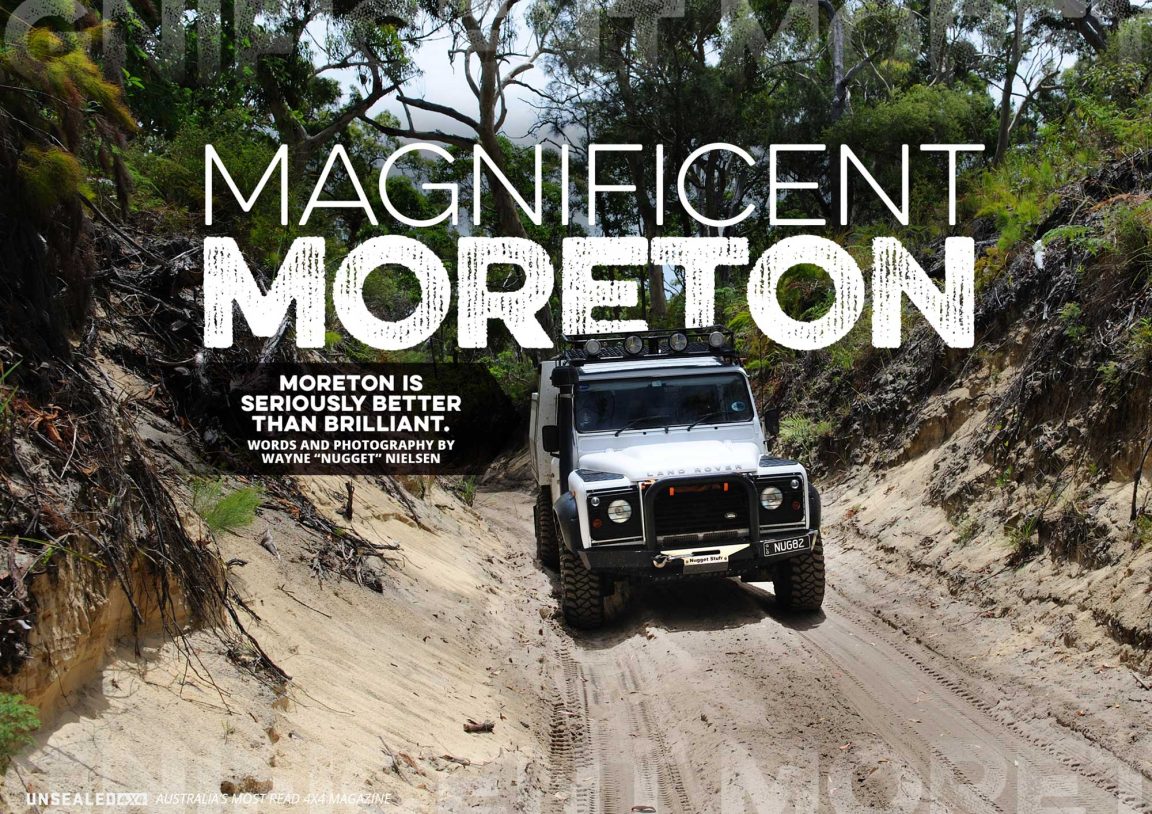 Brisbane is blessed with some of the best beach camping and islands known to man, right on its doorstep. Straddie, Double Island, Inskip, Bribie, and the big daddy Fraser, are all million-star destinations. But our favourite is magnificent Moreton which we reckon has the best beach camping, bucket-loads of soft sand tracks to give the short stick a work out, no dingoes and a distinct shortage of backpackers compared to Fraser, which makes it the ideal place for a family 4X4 holiday.

Situated a lazy 40kms east of Brisbane it is a mere 90-minute trip on the Micat Ferry, which casts off from the Port of Brisbane. The barge pulls up directly on the beach, so if you don’t want 50-odd 4WDs full of very eager fisherman backed up behind you because your tyres are still at 40psi and you are bogged, take the time on the trip over to let some air out of your rubber. 18psi is a good starting point for most large 4X4s. The ramp is dropped on the sheltered western beach, just north of the Tangalooma Wrecks and just south of Middle Road.

The island is a 170km2 off-road playground – 38km long and 8km at its widest point. Captain Cook named the northern tip Cape Morton in May 1770 thinking it was part of the mainland. When Mattie Flinders slipped by nine years later, he saw the light and named it Moreton Island and Queenslanders have been trying to keep it a secret ever since – especially since the southern invasion started.

With Camping and Vehicle Access Permits obtained in advance we made a beeline to Middle Road, which links the eastern and western beaches. Middle Road has one-way sections but the rest of the tracks are single lane with plenty of blind corners and hills. There are “pull off” areas but inevitably two vehicles will end up nose-to-nose, generally on a corner – because that’s what Murphy’s Law dictates – and someone is going to have to lock into reverse. The beach changes by the tide and it’s easy to have the sand change from flat-as-a-tack to roller-coaster.

Washouts where freshwater creeks run into the sea also need to be approached with caution as steep drop-offs are often a result, with a couple of notorious ones on the western side. Restricted zones are signposted and clearly marked on maps, whilst bypass roads are generally guaranteed to test the value of kidney belts and sports bras.

If bush camping is your go, then my preferred southeast camping zone would perfectly fit the bill. This is bring-your-own-everything territory with no facilities but plenty of sites with sea views and shade. Fires in existing pits are permitted as long as you bring your own wood and fire sticks. Obviously it gets busy during peak times but for the rest of the year the closest noise is the rolling surf. On this trip we had a turtle drag itself up the beach during the night and lay its eggs right in front of our camp. You don’t get that at an apartment on the glitter strip. The western beaches tend to be busier as the more sheltered aqua waters are great for young families, and are closer to facilities. Don’t get me wrong, there are many fantastic campsites tucked away but for ours, it always seems busier with more trucks and people.

Getting around is always best two hours either side of low tide and on the hard sand 2WD or 4WD high can be used, but the basic rule is the softer the sand, the lower the gear required – and don’t forget to keep the revs up. If you do get into strife, make sure you have appropriate recovery equipment. People are always willing to help, but it is extremely unfair to expect them to supply the recovery equipment as well.

When it comes to things to do, fishing is number one with a rocket; most 4X4s having enough rods on board to fill recreational fishing quotas in the first hour. One of the beauties of Middle Road is that if the wind blows up buggering the fishing on the eastern beach, it is a quick trip over to the western beach, which will be a millpond where monster Bream are waiting to commit Hara-Kiri on a worm-covered hook.

For those not into angling, there are plenty of other things to do and see. The Blue Lagoon is a window lake created where the water table is exposed at the land surface and features a beautiful sandy beach and crystal clear water where both big and little kids can float around on a hot day. Mirapool Lagoon on the southern end is equally inviting and a fantastic place to take the kids and have lunch under the awning whilst gazing across the sea to North Straddie. Honeymoon Bay is as idyllic as it sounds and the bay at North Point is about as close to paradise as you can get this side of the Pearly Gates. The beach at Tangalooma Wrecks is just perfect for kids to play all day and for those who enjoy snorkelling it is a wonderland.

For the more energetic, The Desert and the Small Sand Hills feature large sand dunes that are perfect for beginners to try sand tobogganing. For a real heart starter, The Big Sand hills, which can reach 80 meters, have recorded runs of 50km/h which is pretty quick when there is just a thin bit of board between the sand and your best bits.

For the walkers, Mt Tempest, which at 285m is thought to be the world’s highest stabilised sand dune, is a top stroll for the fit and a lactic-acid-builder for the unfit. The Rous Battery track is a fabulous walk for history buffs, giving an insight to the front line defences of WWII. Even on a short stroll some of the gun installations and associated bunkers can be explored. Sadly, at Cowan Cowan, erosion has taken a hard toll and most of the gun installations are now on the beach.

Another great attraction is Queensland’s first lighthouse built in 1857 by NSW, before Queensland became a separate colony. Built by convict labour on the only available rocky ground from sandstone mined on the island, there is an excellent information centre and the chances of seeing frolicking dolphins or a passing whale during migration season is high.

A fantastic day drive at low tide is along the western side from Tangalooma to Kooringal where the sheltered waters are constantly inviting travellers to swim, boats lazily sit at their moorings and water birds flourish around the mangroves closer to the southern tip. As we found, it is very easy to get caught in Kooringal’s casual Gutter Bar for fresh oyster or prawns, a coldie and a natter with other Moreton visitors. The beach is very narrow on this side of the island and low tide travel is THE only option so if the low tide is missed, don’t try to be a hero, take the track across to the eastern beach.

While I love to think that Queensland is beautiful one day and perfect the next, on this trip we had some ordinary weather as well. Did it matter? Not an iota, as we had a lazy day bunkered under the awnings catching up on some reading and letting the city tensions run from our big toes into the sand.

Moreton has it all. Easy to get to, fun off-road driving, fantastic beaches, fabulous fishing and first rate bush camping. Equally, there is nowhere better to put the feet up and just watch the waves roll in one after the other… all day long.

Where: 40kms northeast of
Brisbane in Moreton Bay.

How to get there: The MICat Ferry leaves daily from Howard Smith Drive, Port of Brisbane. The off-season cost is $190 return, which includes 2 adults, and takes about 90 minutes. Family fares are also available; check the website for seasonal specials. All the information plus online booking is available from the website: https://www.moretonislandadventures.com.au/

Camping: Camping with some facilities is available in campgrounds at Comboyuro Point, North Point and Blue Lagoon.

Bush camping is in large zones on both sides of the island. If there’s a totem pole with a campsite number on it, you can camp there. If not, be prepared for the ire of the rangers. Use existing campfires and bring your own wood. Collecting firewood is prohibited, so don’t be responsible for stealing a white ant’s home.

You need to be self-sufficient in the bush zones as no facilities are provided. Toilets are available at various locations on both sides of the island. Camping and vehicle access permits are compulsory and can be booked online at:

There is an excellent series of maps, which can be downloaded from the site covering the island, camping areas and a lot of relevant information. Alternatively you can book by phoning 13 13 04.

For those who might want to 4WD and fish but not camp, there is a host of holiday-style accommodation at Tangalooma Resort, and in Bulwer and Kooringal townships.

Domestic animals are prohibited in National Parks, so leave Rover at home.

Supplies and facilities: Best to be as self-sufficient as possible. Currently there is no fuel available on the island. Some basic supplies are available at Bulwer, Kooringal and Tangalooma Resort but not all shops are open every day.

Trip standard: Degree of difficulty depends on beach conditions and tides and therefore it is a B or C. Carry a snatch strap and shackles and someone will always help if you get into strife. Don’t forget a tyre gauge, deflator and compressor.

Check the tides and drive as much as possible close to low tide. Sections of the beach may be impassable at high tide.

Maps and guides: The download map on the EPA website is pretty good and all you should need.

If you run OziExplorer, a handy tip is to set your campsite as a waypoint as it makes it much easier to find when returning from your day’s adventure. 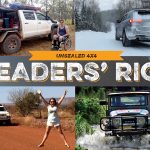 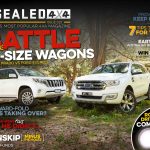