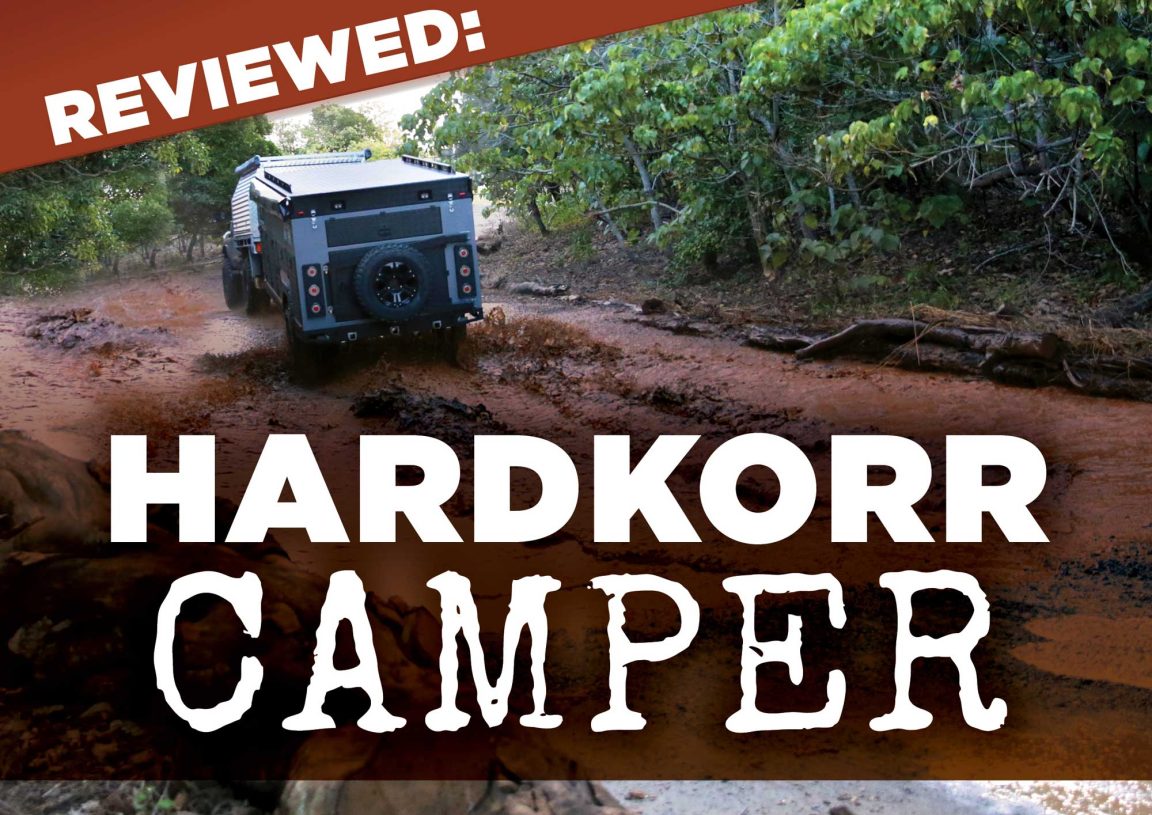 OK, so they can’t spell; but can they make a good camper?

Picture this for a sec. You and your mate make LED lights for a living. You’ve got another good mate who earns a crust by making camper trailers. You’re all up in FNQ on a Cape trip relaxing around the campfire and the talk turns to how you’d go about making a tough, Aussie-built trailer that’d be comfy, quick to set up and capable enough to handle the worst the Cape (or any other destination) could throw at it. You’d probably come up with something pretty fancy, eh?

Well that’s exactly how the HardKorr Camper came into being. Kirk Buckley and Cameron Cross from Korr Lighting were on their way to the Tip with Tony Taylor from Austyle Campers when they began brainstorming on how they’d build the aforementioned trailer that could be towed to any tough touring destination in the country. Fast forward through some serious drawing board discussions, some minor tweaks to get things working, and a whole lot of hard graft… and what you see before you is the result.

And we have to say it’s pretty impressive. With a set-up time of under three minutes (Tony can actually do it in under two minutes, but he’s better at it than us) at the push of a button, plenty of interior comfort and all the mod cons you’d expect at this price point – not to mention the ability to pretty much be towed anywhere your vehicle can drive – the HardKorr Camper should garner plenty of attention from the market… and judging by the amount of interested looks we got from other folks on the tracks during our shoot, there’s going to be heaps.

The HKC-6000, the model of the trailer, is available in two grades: Standard and Deluxe. Both utilise the handy elevating camper roof that’s as easy to operate as pushing a button. It’s powered by electric lifters in Standard trim, while the Deluxe scores hydraulic lifters (although at a $9,500 premium). Either way, set-up is not what you’d call a difficult process. Simply pop open the access cover and use the remote to raise the roof. In all honesty, if this thing were any easier to open it’d be a locked GQ Patrol…

The aluminium (not fibreglass) roof is actually rated to carry up to 400kg, which is a great advantage for those who want to carry longer gear like surfboards or kayaks without having to unload them every time they get to camp. Simply leave them up there if you’re doing a quick overnight stop and continue on your way in the morning without having to re-secure them. Pretty handy if you ask me.

The only other aspect to the set-up is the surprisingly-easy-to-use HardKorr Wing Awning that offers 270° of coverage over the passenger side and rear of the camper. Interestingly, the awning also features Korr’s own orange/white tinted LED strip lighting, which they reckon keeps the mozzies at bay. The awning is an alloy-framed unit that can be set up easily by one person and has been designed to have an enclosed annexe attached if you’re staying in the one spot for a few days.

As much as I love self-inflators and swag mattresses, for the best in comfort you really can’t go past a good inner-spring queen-sized item… and that’s what you’ll be dozing on in the HardKorr. The bed is accessed by a neat pull-out step located next to some large clothes drawers built into the bed’s leading edge. As you’d expect, given what Kirk and Cameron do for a living, LED lighting is all over the place and provides an excellent amount of after-dark visibility. The Alupanel ceiling kicks up over the bed giving extra headroom and there’s overhead storage right around the walls. The inside can be configured in a variety of ways depending on the buyer’s individual needs – with the choice of a dinette that can be folded into a single bed, or kids’ bunks, or a screened-off shower and toilet combo. Or you can leave the area purely for storage if you’re the type who travels heavy.

Getting inside the camper can be achieved through either of the side doors and there are insect screen equipped windows in each wall of the 10oz canvas tent section. Perfect when you’re in the tropics and need some airflow but don’t feel like testing whether you’re susceptible to Zika virus or not…

There are USB outlets aplenty and the Deluxe scores a 240V plug as well for when you need to watch the Grand Final on the big screen 250km south of the Tip.

Want storage? The HardKorr has you covered. The drawbar has a big old lockable storage bin that runs the width of the camper that’s internally lit by (surprise surprise) Korr LEDs (just like all internal storage spaces). This is where the Country Comfort instant hot water system will live on the production models (it was in a side storage pod on this model) so a little space will be sacrificed, but it’s still pretty cavernous. There’s also a rack that’s handy for stashing Jerries or firewood or any bulky items without fuss. A 20W floodlight mounted to the front illuminates the area for hitching up and there’s another out the back for reversing into tight spots when the sun is busy on the other side of the globe.

Twin 75L stainless water tanks sit over the axle for weight distribution and to keep you hydrated in equal measure, while two 130Ah AGM batteries (on the Deluxe) keep the amps flowing via a REDARC BMS Manager 30 unit, which also has a handy remote head so you can see what the go is with the electics quickly and easily. The control panel is actually pretty well stocked, featuring a Fusion head unit for annoying other campers (if you’re into that sort of thing) and dual USB outlets, cig and merit plugs as well as an Anderson 50-amp socket for hooking up to the twin 120W Korr solar panels, or even jump-charging your tow rig.

The fridge pulls out on a slide that can be configured to suit any brand of fridge. Our demo model had a 65L Waeco fridge-freezer that was plenty big enough for a week or two in the scrub – keeping the food and drinks crisp with minimal amp consumption. The kitchen pulls out at the rear of the trailer and features twin Smev burners, a decent-sized bench and a sink with hot and cold water on tap thanks to the 12L/min electric pump. A 65L grey water tank is also an option should you require it, as is an internal Porta Potti – bringing the HardKorr up to Leave No Trace standards.

WHEN THE BLACKTOP STOPS

You might guess that a camper that was conceived up the Cape and designed to handle the hardest trips imaginable… and is called ‘HardKorr’… may be able to cut the mustard off-road; and you wouldn’t be wrong. The hitch is a highly regarded DO-35 unit that has 360° of articulation and is tougher than an angry Cape salty.

The chassis and suspension ain’t exactly made out of wet noodles either. The frame is made from hot-dipped glavanised 3mm 100x50mm steel – the extended drawbar is 3mm 150×50 – and the 2.5mm aluminium camper body has all internal componentry welded to it and no timber joinery to provide what the HardKorr team say represents double the strength over a composite panel construction. There’s no skeleton within; the folds and welds provide the strength. Once that’s all assembled, the body is then powdercoated inside and out.

The suspension is an independent Vehicle Components Cruisemaster heavy-duty coil arrangement with twin shocks for decreased chance of fade over corrugations. The rubber is 245/75R16 Achilles Desert Hawks that are pulled up by 12in brakes as standard. Overall, there’s 560mm of clearance; and even steep terrain can be tackled thanks to the rock slider kit that slots into the recovery hitch point on the rear crossmember.

While this is a demo model and not a production unit, there are still some (minor) bugs to be ironed out. But it really is a very impressive trailer for those looking to do the harder trips without having to worry about their camper falling to pieces halfway up the Tele. As far as Hybrid campers go, this is certainly up for the hardcore stuff… er, HardKorr stuff. 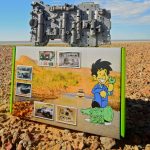