Round LED driving lights or an LED light bar – which is better? This is a question that must be asked daily in four-wheel drive shops and on online forums around the world. And truthfully, I don’t feel anyone has accurately been able to answer until now.

An old saying I heard while working in the tyre industry was: “The best product is the one you have in stock.” Consequently you as a consumer are at the mercy of an overbearing pitch from a salesperson with potentially no first-hand knowledge of the topic. Well, that all ends now. You see, back in Issue #19 of Unsealed 4X4 we took 10 LED light bars bush to see which deserved a place on your four-wheel drive. While that particular test proved to be extremely popular and well received, we couldn’t simply rest on our laurels could we?

Consistency is key on tests such as this, so we employed the exact same methods as in our previous LED light bar comparison. We used the same photographer (cheers Scott) with the same GU Patrol to power the lights; and the camera was locked off at 1 sec, F8, ISO 1600 (same as on the previous test) for those who are brave enough to switch away from auto mode. The same Lux meter was dragged out from the shed, as was the temperature gun used to record how hot the lights got. The same property in the very dark NSW Snowy Mountains was borrowed (thanks Dad) and we mapped out the length and width of the test course with the same measuring equipment. Light measurements were recorded at 1m, 10m and 100m increments from the vehicle. To gauge spread, we took readings five metres to the side of the vehicle, at the 10m marker. We also decided to measure current draw of each light this time around – to see just how much pressure each light is placing on your vehicle’s charging system.

Last time around we had manufacturers send out light bars, which potentially opened us up to receiving products that could have been modified. I’m not saying this was the case, but with so much on the line we needed to take things seriously and not take any chances. So we drove to retail outlets around Sydney and physically picked the lights out of their stock… just as you the consumer would be doing.

ROUND VS LIGHT BAR

The answer to this riddle is somewhat obvious, unfortunately. Judging purely by eye, round LED driving lights had more oomph in the distance stakes but didn’t fill the gaps as cleanly as an LED light bar would. Light bars offered more spread, but didn’t have the same level of straight-line penetration. So the answer? Having both is going to give you the best of both worlds. The round driving lights will provide you with distance, and the LED light bar will fill any gaps and boost spread to the sides of the track. I know, this means you have to buy two sets of lights; but trust me when I say you will be amazed at how much illumination this combo will produce.

Some feedback we received from the previous LED light bar test we undertook was to please, please, please cut back on the technical info and get straight into the comparison. And in retrospect, I agree. When it comes to lights, seeing how they work is much more interesting than reading about how they work. So I’ll spare you the rants on colour temperature and the importance of dust and water sealing. But if you do want to learn a bit more about LED lights, click back to Issue #19 of Unsealed 4X4.

While we were testing these round LED driving lights, it seemed fitting to grab a few Halogen and HID units to see how they stack up next to LED technology. Now, this particular test is about round LED driving lights, so I won’t go into too much detail. But as a heads up for our readers, we will be covering this topic in an upcoming issue of the mag. Keep an eye out for that one… the results were genuinely fascinating.

Lux readings are valuable, but in the real world the beam pattern produced is more important. So while extra care was taken to measure Lux readings in the same position each time for consistency, this can’t take into account the overall picture as every light performs differently. This is why we photographed each light – so you can play along at home and decide which light works best for your situation. This is also why we took each light to an independent LED test lab to scientifically measure the output in a strange-looking contraption called a Light Integrating Sphere. That way, we could cross-reference our results and 100% stand behind this comparison. Also, an independent testing lab legally cannot release false statements or edit its results. What you see is what you get here, folks!

The AR32s feel like quality units. They have a solid mounting bracket and passed water testing without issue. They are down on performance compared to more modern lights (don’t forget that ARB pioneered round LED driving lights), which is no doubt testament to advanced technology flowing through this sector of the lighting industry at a rapid pace.

And while down on numbers in the test lab, real world testing highlighted that they produced a smooth beam of light, great spread to the sides and good long-distance penetration. So while the numbers on paper might not be blistering, the build quality really is second to none.

Bushranger’s entry comes in at the cheaper end of the scale price-wise, yet these lights definitely have some key benefits. Firstly, the small size makes for an easy fit on vehicles with tight bullbars or even on SUVs with nudge bars.

The current draw was really low at just 3.5A, reducing strain on the vehicle’s charging system. They were also the coolest running lights on test, which is always a good thing. Close-range performance was solid, but the output definitely dropped off quickly the further away we tested them. Unfortunately water submersion testing killed one light, which no longer powers up at all.

This is a new product for Drivetech 4X4, and they were quietly confident when we first spoke with them. It is obvious to see why; these lights are rippers performance-wise! Amazing spread, and a really concentrated beam straight down the middle provides a perfect balance of spread vs spot.

The only negative I could find: Perhaps they don’t look as ‘sexy’ as some other lights externally, which really is a moot point unless you shop for form over function. Secondly, small amounts of water entered both lights causing the lenses to fog up. This really was sad to see, as the performance from these driving lights was right up there with bigger players in this sector; and the price is rather competitive too.

Immediate impressions are these lights are seriously heavy. I could barely carry both of them at the same time. They are also huge, both in diameter and depth – so fitting them to some vehicles might be physically impossible. Which is a shame, as the performance from the Great Whites was excellent both in terms of the distance they could cover as well as spread.

Build quality was also right up there; they just felt like a quality product (water testing proved no issue for them). Current draw was higher than any other light on test, but they still remained cool which must be attributed to the huge heat sink on the back of the lights.

These are another relatively new inclusion in the Ironman 4X4 range, and they performed well on this test. Especially considering the low purchase price! Short-range performance wasn’t the best in the field, but they certainly made up for it when it came to mid and long distance output.

Scott Mason our photographer noticed the wiring to the light is incredibly thin which was of initial concern, however as these lights only drew 3.1amps (less than any other light) it explains why they haven’t gone with thicker wiring. Based on our results, if you need a small diameter light with low current draw and solid straight-line performance these fit the bill nicely.

The second we fired up the 215s we knew they were serious contenders. I was blinded while testing close-range performance; they were painful to be in front of. This is obvious when you look at the Lux readings, which were stronger than any other light tested up close in the field.

Mid-range performance was also extremely impressive, but there were better lights on test in terms of long-distance performance. The mounting brackets are strong and simple to install, and the supplied Torx head theft-deterrent security screws make for easy adjustment. Water testing was conquered with flying colours as well; these really are great quality driving lights.

We had an issue with these particular lights, as the cable leading into the body must have been damaged internally – causing one light to flicker. This is what happens when you pick stock directly from the shelf unfortunately; and also what warranties are for (Ultravison offers a huge 5-year warranty). With the cable held in place, we were able to record impressive results.

The lights did run hottest out of the field, but performance-wise they blitzed all other lights in terms of long-distance output, and nearly took the top spot in terms of close-range output too. Water testing highlighted issues with the lenses fogging up, so it seems there is room for improvement with build quality. In terms of overall illumination however, Ultravision lights certainly are hard to beat.

While these lights from Xray Vision look a little different to the others on test, it must be said the LUX readings were very consistent. The light beam produced did have some cold spots, which must be a result of running fewer yet larger LEDs in the housing. Combined with an LED light bar though, and this wouldn’t be an issue anymore… but it is worth mentioning.

Current draw was equal second lowest out of all lights on test, and the same result was achieved when it came to running temperature. While hard to speculate, you would have to imagine those statistics point to good results for longevity. 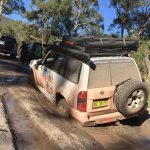 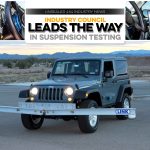