Here we have Barry’s 2010 Toyota LandCruiser VDJ79 Series, which he has set-up for camping and fishing trips around his native area of Shark Bay in Western Australia. He also loves to head north to the Kimberley for more remote fishing trips when time permits. The ‘Cruiser has Old Man Emu suspension, factory diff locks and a 3in exhaust system made by Beaudesert Exhausts for a bit more power and a nicer note. A mate of his fabricated the impressive alloy canopy, as well as the side rails you can see bolted to the ARB bull bar. Keeping the fish cold (assuming they are biting) are two Engel fridges, 60L and a 21L in size which are fed by a massive solar panel, into a 120amp deep-cycle battery. A very cool touring rig indeed!

Want to see all of these truck? CLICK HERE FOR MORE INFO

Jamie wrote in all the way from Swindon in the United Kingdom to show us how they do things over there. Apparently it’s mainly Land Rovers (well duh) and Zooks that go ‘green-laning’ so after owning “about 20” Landies over the years, as well as building up his current very well appointed TD5 110 Defender, complete with a fresh paint job and fully galvanised chassis, he’s decided on something a little different. Well, not that different in shape, but still pretty cool. He’s now spinning spanners on his 1989 Mercedes G-Wagen (funny that, we took the new one for a squirt earlier in this issue). First cab off the rank was to hoick the stock 2.8L straight-six petrol engine and 4-sp auto and replace it with Merc’s OM606 diesel engine which boasts a 3.0L capacity and is backed up by a modern 5-sp auto from an E300. Should be bit of a weapon when it’s done. The diffs on these things are strong as oxen and nothing’s tougher than wheeling a big rectangle box we reckon. Even the interior on this one isn’t too shabby, “in an 80’s-tastic sort of way” says Jamie. Make sure you flick through some more shots when she’s done and wheeling mate!

The story behind this one is very cool. This truck has been in Shannon’s family since new. It was rusting away sadly in a paddock when she decided it was time to get her licence and bring it back to its former glory. She wasted no time, fitting an ARB bull bar she picked up for a bargain, as well as a set of Maxxis Bighorn muddies (which she needs living in soggy Victoria). There is a bit of rust to sort out still, but that’s nothing she can’t handle. Just like the engine swap she and her mates had nutted out in just a few weekends after the stock diesel engine went bang. Best of all, Shannon is still driving this Shorty-Forty every day she can, both on and off road. It damn near brings a tear to the eye.

Now how is this for a well sorted custom truck? One look at how much suspension travel this has is enough to realise it hasn’t been built for wheeling shopping centre car parks or the local drive-thru. Nup, this one is for Searlie (as his mate’s know him) to cut loose and have some fun out in the bush with. The TD42 has had a high-mount hairdryer strapped to the side running about a thousand psi (if the turbo whistle is anything to go by) and she’s locked front and back too. The fast blue paint was done and the custom tray were both handled by Searlie, who also doesn’t mind having a blat on the dirtbikes given the opportunity. In fact he’s almost as handy behind some Renthals than he is on the tiller of his 37in tyre sporting GQ brute. Now if you’ll excuse me, I have a fair amount of drool that needs wiping up… 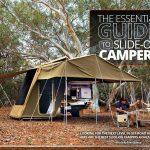 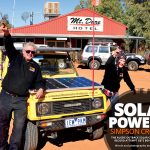