The EQS SUV has been confirmed for Australia, with three models on offer at launch including the EQS 450+, EQS 450 4Matic, and the EQS 580 4Matic. The first vehicles are expected to land here in the first half of 2023, but it’s unclear at the moment which ones are set to come.

What’s the difference between the EQS and the EQS SUV?

The Mercedes Benz EQS SUV is a high-profile, boxier version of the EQS. The taller seating in the SUV allows the overall length of the vehicle to be bobbed by 5.5 inches, however you get the same exact battery pack and virtually the same motors and suspension. There is however 11 cubic feet more cargo volume with the rear seats down, which naturally you’d expect with a bigger car. The SUV shares the same 126-inch wheelbase as the EQS sedan, but differs as it’s 7.8 inches higher.

The five-passenger EQS SUV has plenty of room for the family, especially considering an optional third row of seats can boost the capacity to seven. This makes it one of the largest, fully electric vehicles in the passenger vehicle category. Mercedes notes that the boot has enough room for four golf bags, but if you’re less of a golfer and more of a road tripper, you’ll be pleased to know there’s space for everyone’s items.

What about the exterior?

I will praise Mercedes, as always, for making beautiful vehicles. The EQS SUV is no exception. The aesthetics are as expected and anticipated, it has minimal exterior creases and flush door handles. Mercedes has stated that the intention for the SUV’s shape, mirror placement and wheels is to assist the aerodynamics, but it’s also equally aesthetically pleasing to drive past.

Talk to me about the battery

Due to the SUV’s added mass and its wind resistance, the 107.8-kWh battery pack may deliver 30 fewer miles of range than the Sedan. Lower across the board, the SUV has a maximum of 660-kilometre range on the tougher WLTP test cycle, instead of up to 784 kilometres.

Read next: Ford is bringing the F150 back to Australia 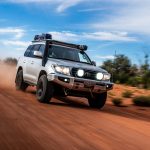 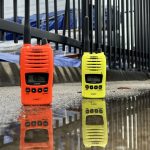