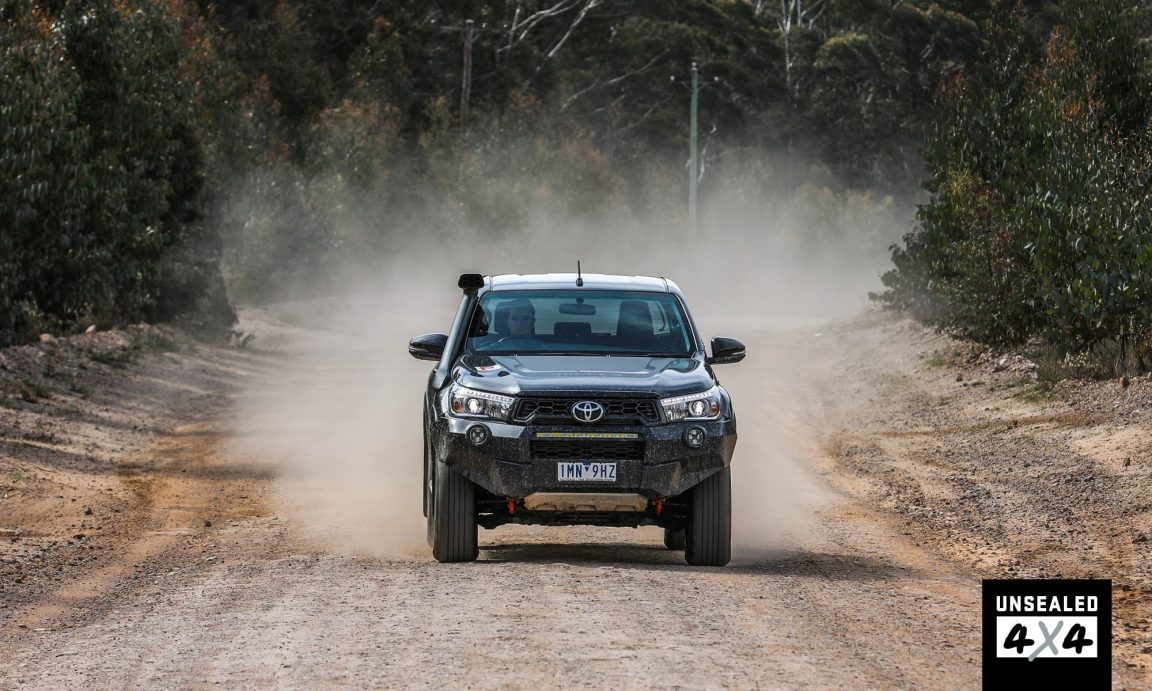 Ever wondered what a young bloke thinks of a HiLux Rugged X? Wonder no more. We threw the keys, and a serious study diversion, to Bill Callinan to find out

With only seven days remaining until I was to start the HSC, what better way to practice my creative writing and get a break from the books than taking a burn in the HiLux Rugged X? There’s always some sweet tracks to be had around Newnes and the Lost City, just 1.5 hours west of Sydney. There is no shortage of mud and rocks, which would help us discover if all of those bash plates and protection equipment were for go, or show.

I’d been eyeing the HiLux off since the day it arrived. Having driven almost every dual-cab on the market at the moment, the HiLux was one of the last ones to tick off the list. The first thing I loved about the ‘Lux was the 240V power from factory. We had a bunch of camera batteries and laptops that usually require an inverter, but having the ability to charge them on the highway on the way over the mountains was really handy. 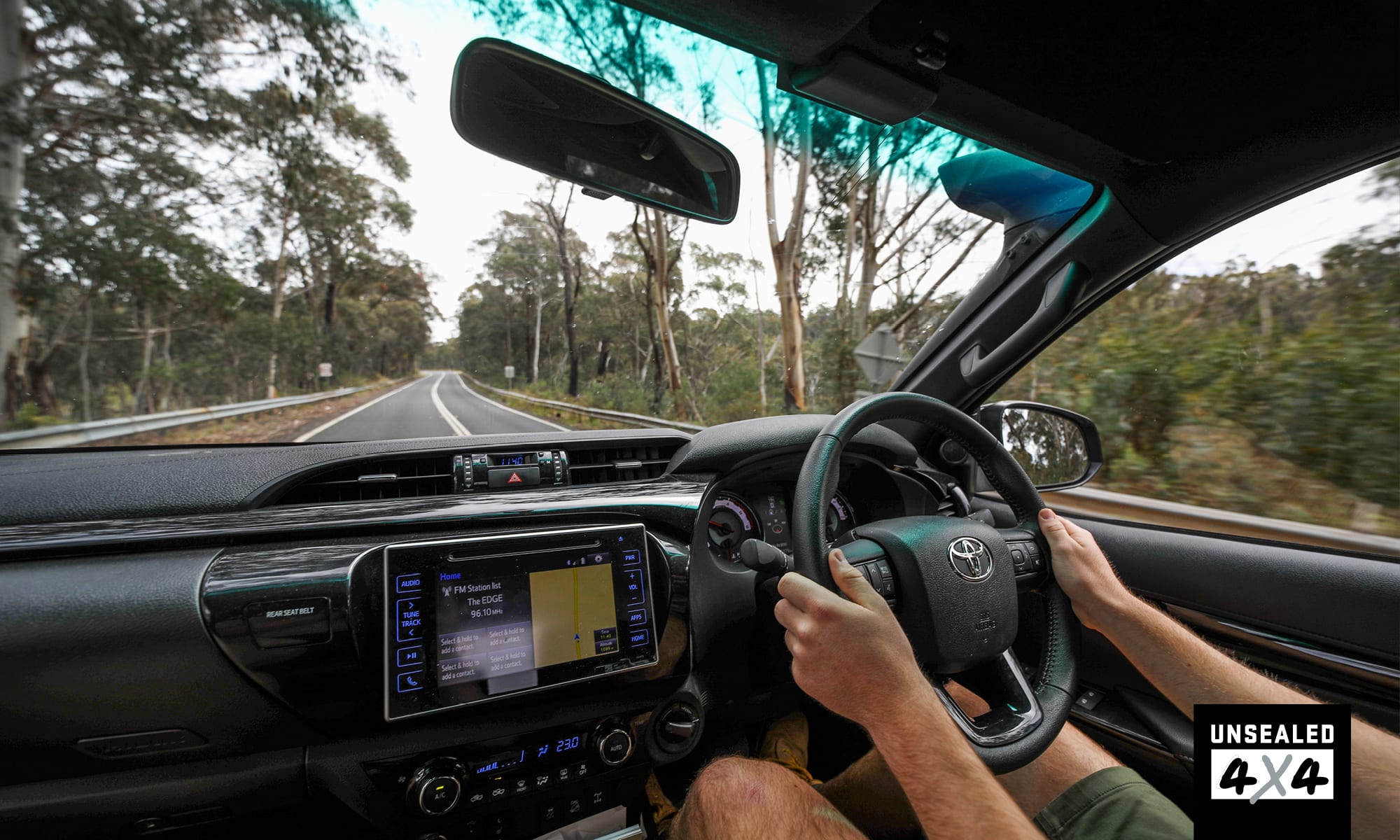 The cruise control was also a pleasant surprise, with the speed set, the engine managed to hold gears and stay close to the set speed, which is something that few dual-cabs seem to nail. As soon as we hit the dirt, the tyres were proving to be the weakest part of the car. The suspension was riding fairly well, yet the factory Bridgestones were struggling to keep the car pointed straight, even at relatively slow speeds on Glowworm Tunnel Road (we’ve since upgraded them). The suspension didn’t have any issues with the corrugations, but the occasional pothole was enough to bottom out the front shocks, something that could be fixed with some slightly beefier aftermarket dampers.

There are plenty of hardcore spur tracks around The Lost City, so we pointed the graphic-laden bonnet towards those to see what this rig was made of. Straight away we noticed that the rock sliders on the Rugged X were bloody awesome! These factory-fitted lumps of metal were holding the weight of the car and saved the sills countless times. Most stock dual-cabs would have bent up their side steps, or damaged the body, but the sliders proved to be an invaluable feature, especially when climbing the rocky ledges on the power lines track. 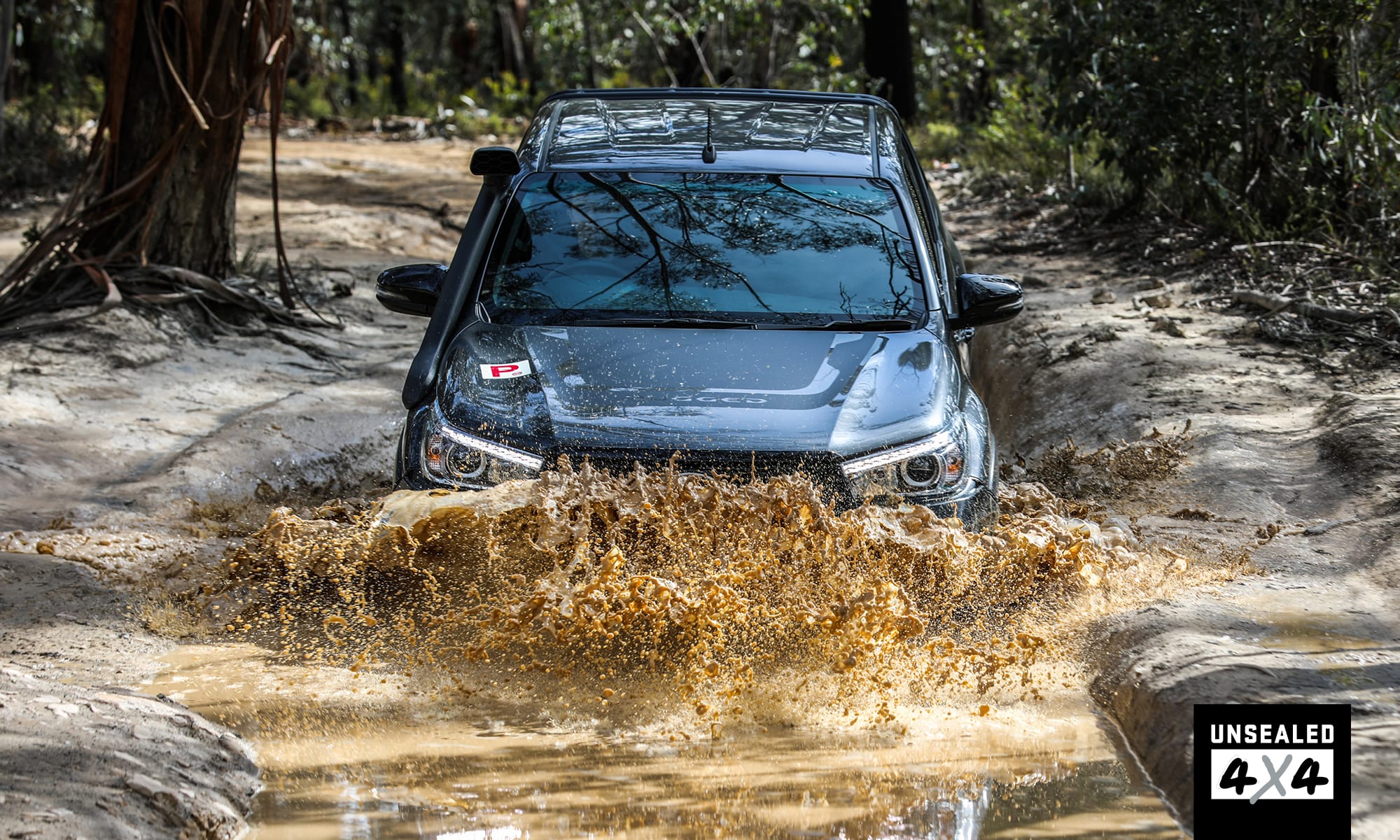 My personal favourite feature on the Rugged X is the LED light bar that comes standard in the front bar. It put out more than enough light for travelling on rural roads. It’s one of few cars that comes from factory with sufficient lights for touring and heading off-road. Also attached to the front bar are two big beefy rated tow points; although Angus and I didn’t need to use them, their ease of access and beefy size would have been perfect if we were to get stuck.

Power mode and eco mode seemed to have more of an impact on throttle control rather than engine power. Power mode helped the HiLux pick up a little bit of momentum coming through the thicker mud, but the difference between the modes off-road proved to be marginal. Hill Descent Control (HDC) was another feature that proved to be effective in the looser dirt while descending the power lines track. Before activating HDC the HiLux was picking up speed and then locking up and sliding for several metres before it could be controlled again; HDC helped to keep the ute on the tracks, keeping the engine in a lower gear which prevented lock-ups and slippage. All-in-all, my few days in the Rugged X proved to be a lot of fun, and it’s nice to see a manufacturer trying to cater to the Aussie 4X4 touring market with some solid, practical mods. 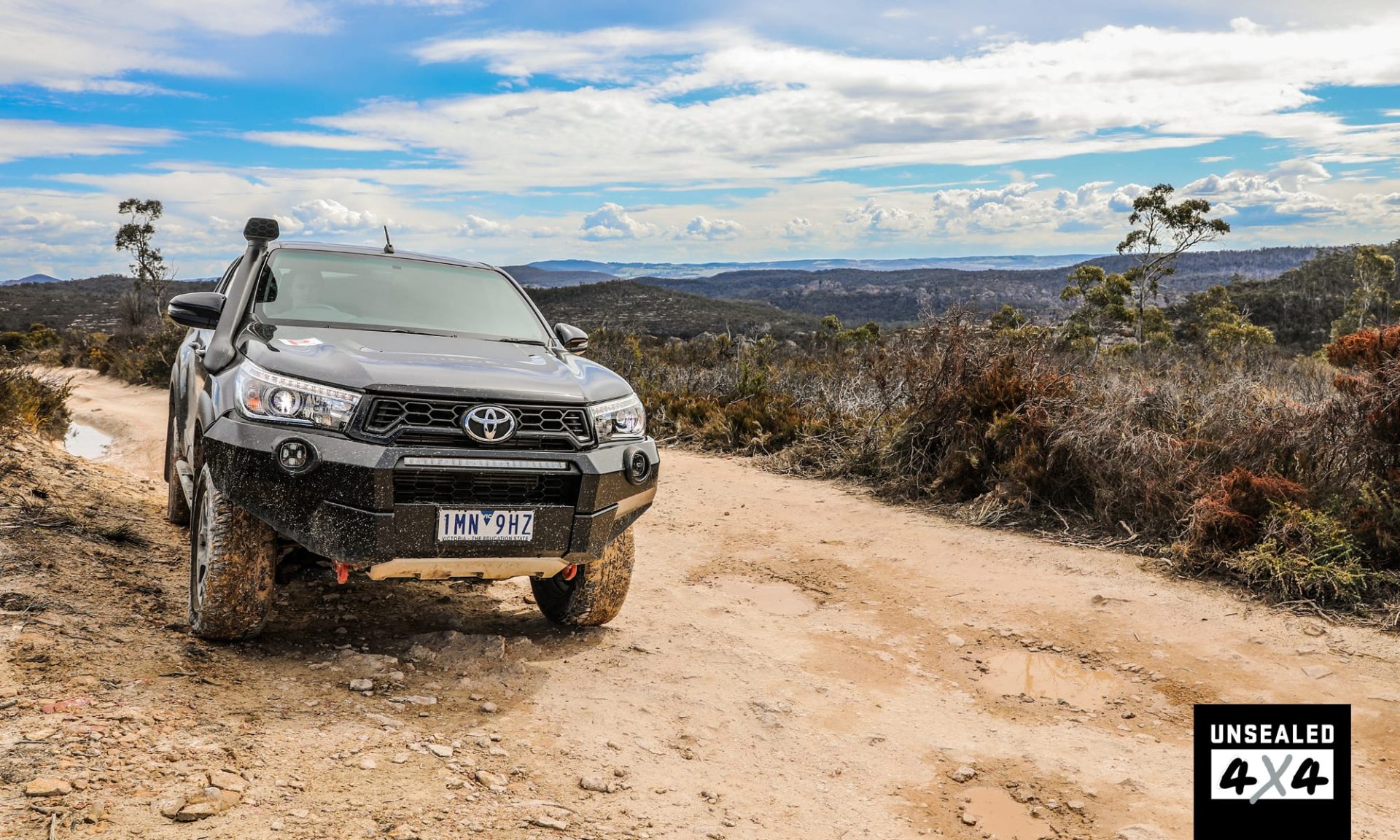 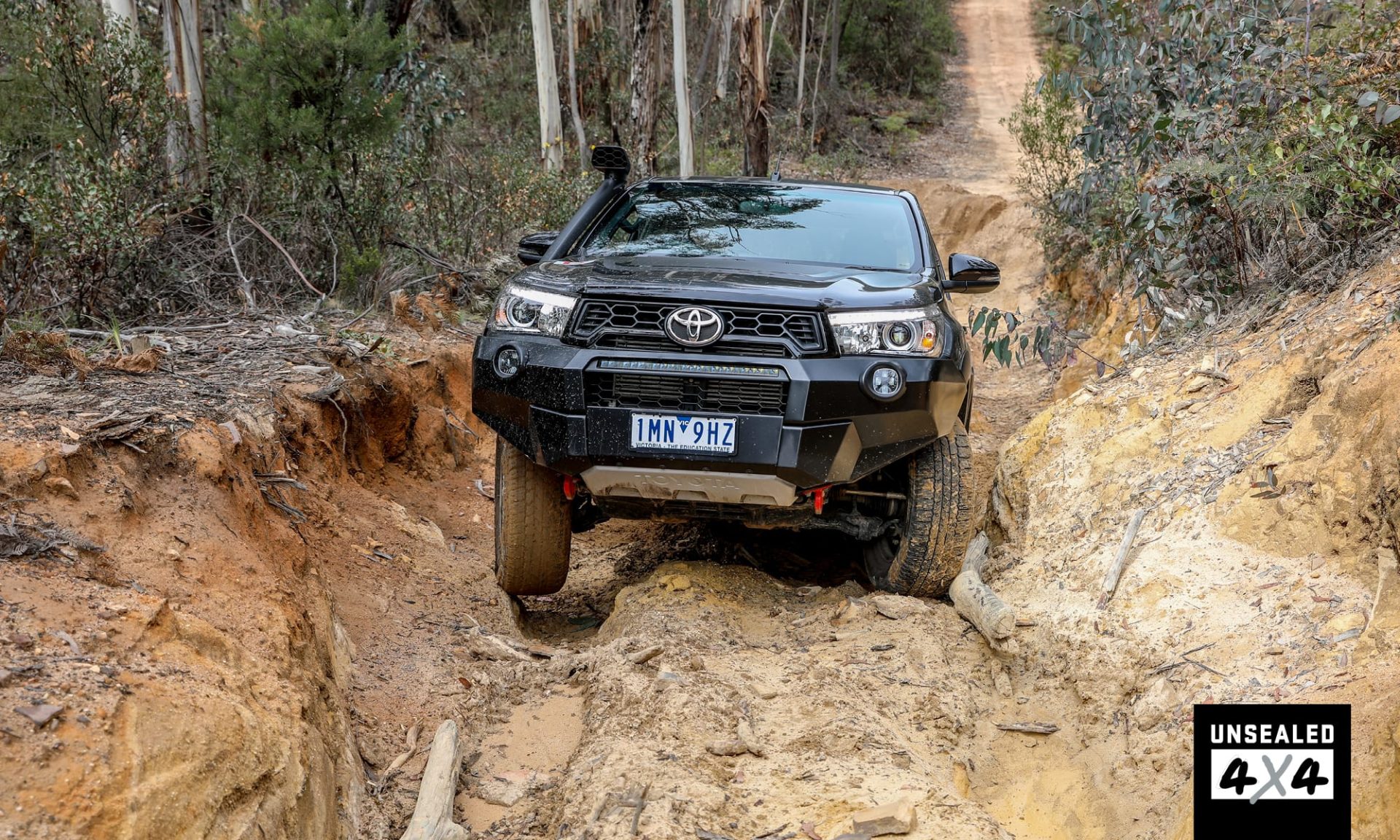 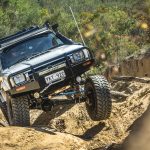 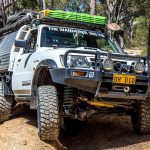