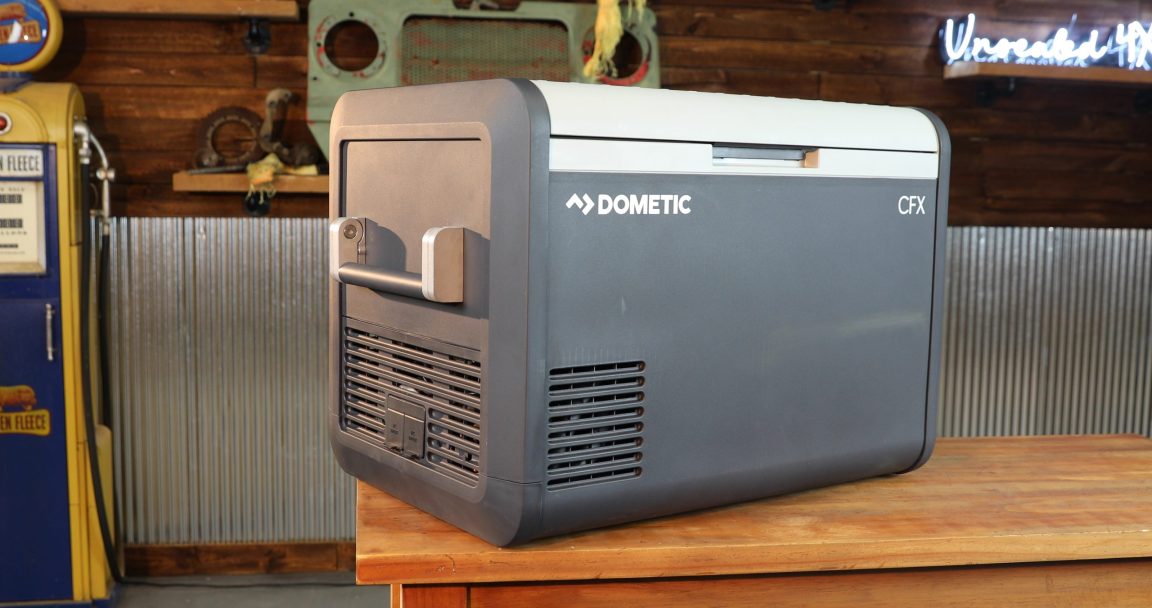 The Dometic CFX3 55IM fridge claims to be the world’s first portable single-zone fridge with an inbuilt ice maker. We put it to the test.

Hitting the Australian market in February, the CFX3 55IM is a single-zone fridge with a difference. Huh? Yep, it’s got a built-in ice maker; not to be confused with a dual-zone fridge/freezer. We borrowed one from Dometic for a week to put it through a range of tests.

What’s in the range and how much does it cost?

Check out our first look of the CFX3 55IM

Okay, so, not all portable fridges are created equal but a fridge that’s also got an ice maker built in (Dometic reckon it’s a world first in a portable fridge), well, we figured that was pretty interesting. But let’s clear up the elephant in the fridge and that’s the name, it’s called a 55 suggesting a 55-litre capacity, but there’s actually only 53-litres of storage space in the fridge proper, the ice making compartment steals the extra room. Still, there’s enough space, once you remove the baskets there’s enough room for 83 cans of drink. Look inside the CFX3 55IM with its ice maker and you’ll see the baskets and a small lidded section. This is where the ice trays live and where water is turned into, well, ice. The ice maker runs separately from the rest of the fridge; meaning instead of being able to set a temperature, it’s either just on or off. But it’s the fact that you can switch it off that’s pretty cool, no pun intended.

Once you switch on the ice maker functionality, the Rapid Freeze Plate is activated. The plate is what the two included lidded silicon ice trays sit on which is what the silicone ice trays sit on. The powerhouse of the CFX3 is Dometic’s reliable VMSO3 variable-speed compressor which is designed to constantly adjust how hard it has to work to meet demand.

Featuring Dometic’s recognisable ExoFrame design as well as aluminium hinges and handles for durability, the CFX3 gets a high-resolution display, along with soft-touch buttons. In our test which we’ll get to next, we put the fridge out in full sun and could read the display easily. And connecting your smartphone to the fridge via Dometic’s app (using Bluetooth) is a snap. Via the app you can monitor and adjust the temperature of the fridge, as well as track energy consumption, and even receive alerts if the fridge lid is left open.

The CFX3 55IM, like the rest of the range, also comes with three-stage battery protection, low, medium, and high. This is to provide peace of mind knowing you won’t wake up to a flat battery. One the inside there’s an LED light, along with removable wire baskets to organise your supplies. The CFX3 55IM can run off both AC and DC power, including Dometic’s PLB40 unit, which is designed to work with the CFX3 range.

How did we test it, and what did we learn?

To put the Dometic CFX3 55IM to the test, we tried to replicate the real-world usage of a portable fridge. To do this, I put it in the back of my car on Friday afternoon and headed off for the weekend. To make it a fair test, I plugged it into 240V at home to cool it down to the set temperature of 4-degrees C. I filled up both the silicone ice trays, placing one in my freezer at home and one in the ice maker section of the fridge. I did this so I could see throughout the weekend whether the ice maker worked and if it did whether or not it would maintain ice or let it melt. To test it, I filled the fridge with predominantly drinks and a few foods, to check whether the refrigerator would maintain the set temperature even when the ambient temperature dropped/increased and whether delicate foods like tomatoes would spoil. 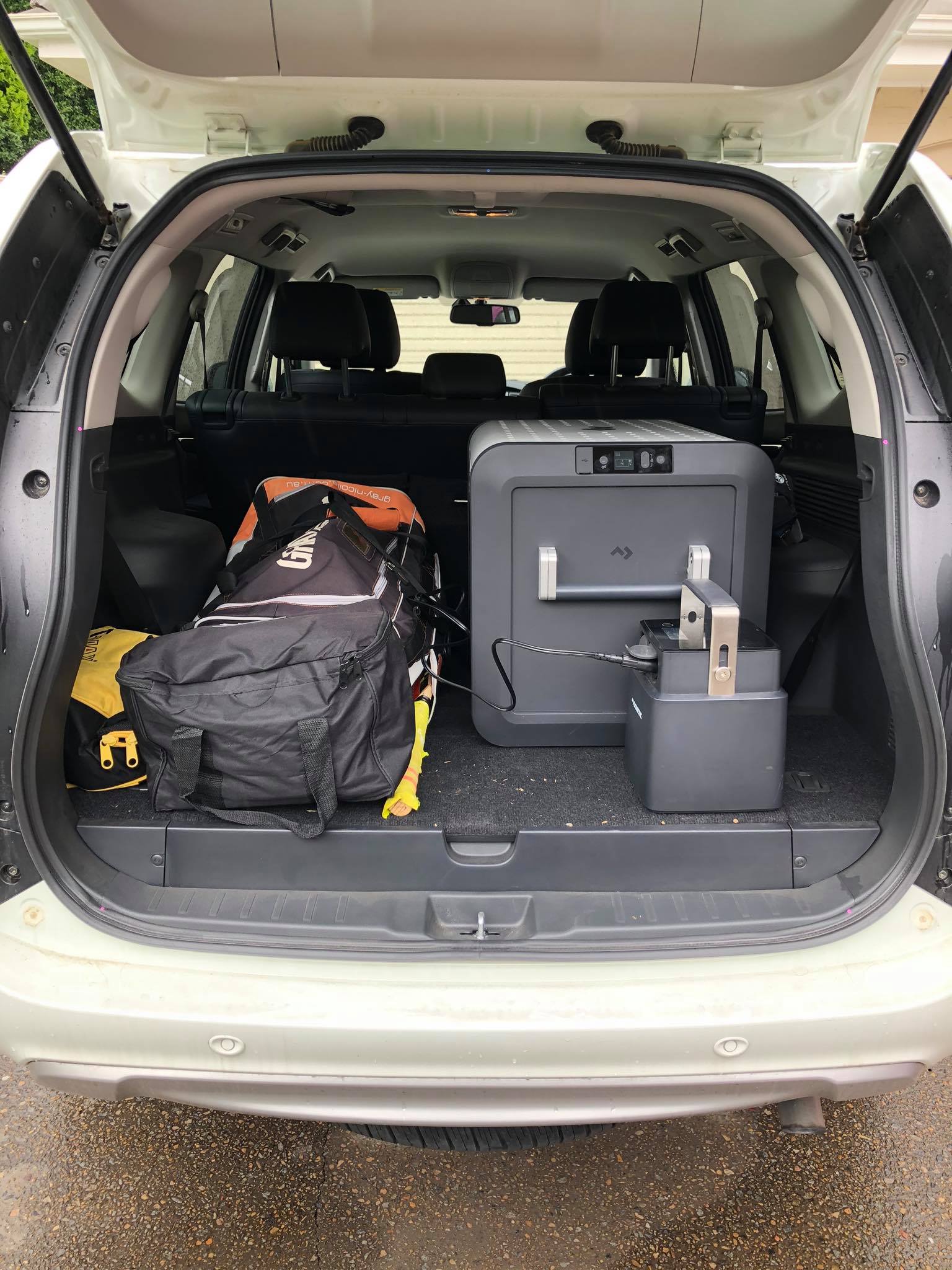 Come Saturday morning I had both ice trays in the ice maker, both with ice in them and put the fridge into the back of my 4X4. Now, I don’t have a dual-battery setup in my rig yet (it’s on the cards) so I grabbed a PLB40 Dometic Lithium Battery pack from the office and used it to run the fridge across the weekend; the PLB40 was designed with the CFX range in mind.

The fridge stayed in the back of my vehicle across the weekend to simulate a typical weekend camping trip where a fridge would be expected to withstand higher ambient temperatures in an enclosed space (ie. back of a 4X4). Throughout the weekend, I was constantly in and out of the fridge, but I didn’t purposely leave the lid open for long periods so that all the cold wasn’t lost. The reason for this was the ice maker. We spoke with Dometic and they explained that after the first four hours where their is an increased draw with the ice maker on of 4.24Ah/h, the on-board management system is meant to reduce the draw to 1.2Ah/h. Which is still slightly more than when the ice maker is completely turned off. However, the overall power draw is less than CFX3 dual-zone variant. The moral here is though, if you don’t need to have ice cubes in your drink then turn off the ice maker function and the fridge will draw less power. Away from the ice maker gimmick, well, it is (although scotch drinkers may disagree)… the extended evaporator which reaches right the way around the walls of the fridge, meant that cooling was even throughout the fridge.

When I brought the fridge back to work on the Monday, we decided to leave it outside for the day plugged into the PLB40, which was charging off a 120W solar panel, where the ambient temperature was much higher than 35°C. What we found was with the ice-maker function turned off the fridge remained at a constant four-degrees C, and the PLB40 was not only able to maintain that temperature for the whole eight hours (in full sun) the PLB40 was actually able to also replenish itself.

Anything else I need to know?

Yes, while the ice maker appeals to some if it is not for you all the time you can remove it. This is something we didn’t realise at first but once removed it provides you with the full 55-litres of space. However, Dometic does also offer the CFX3 55 fridge, which is the equivalent size just without the inbuilt ice maker function. 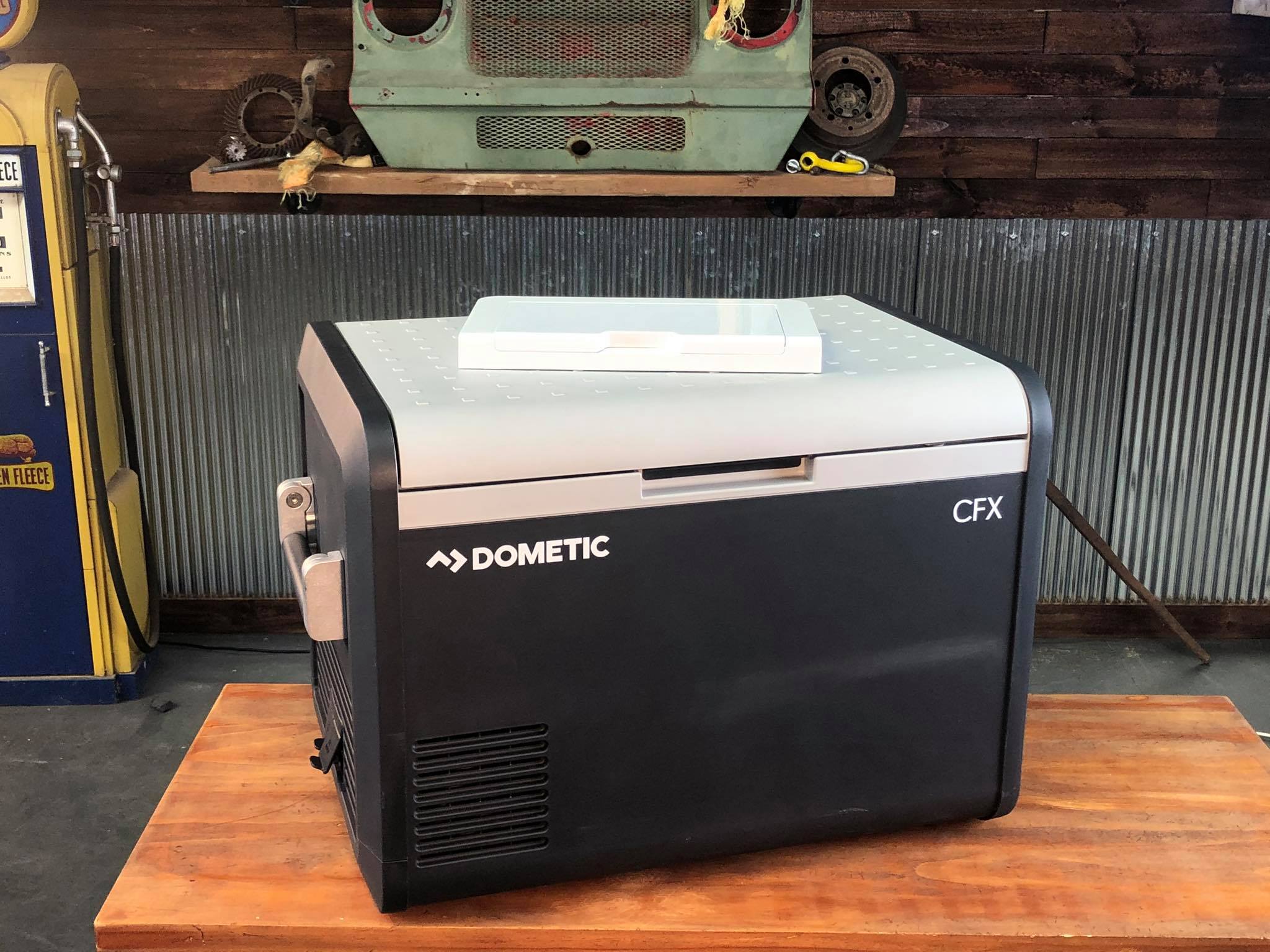 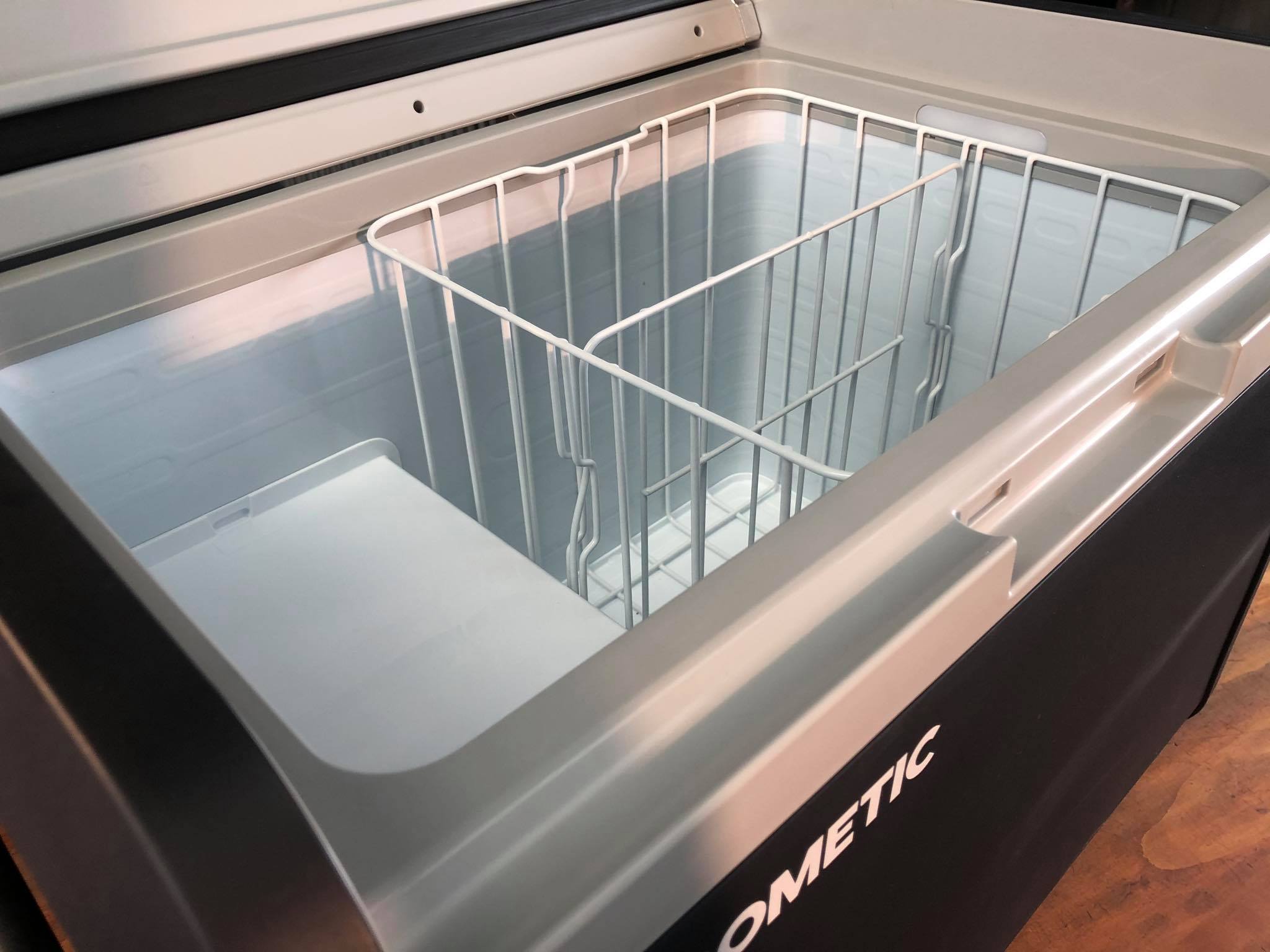 So, what do we think?

The CFX3 range of fridges seems to be a winner, with its extended evaporator throughout the inner walls and Dometic’s VMSO3 variable speed compressor enables good power regulation even when maintaining four-degrees C; but with the ice maker turned off.

However, the CFX3 55IM model with its internal ice maker is a headline grabber, a way for Dometic to make a ‘first-ever’ claim but in the real-world it’s unnecessary. Unless you desperately want the ability to have ice in your drinks while camping, and have an effective battery management system set up, look to other models in the CFX3 range if you’re after a ‘fridge’. The other models offer the same features as the CFX3, such as the ExoFrame and heavy-duty stainless-steel hinges, but without the bulk and space reduction that comes with the ice maker. For a fridge that can hold ‘only’ 53-litres of stuff, the CFX3 55IM is rather large (it measures 71cm long, 45cm wide and 49cm tall), especially these days where payloads in 4X4s are so tight (it weighs 21.3kg, which is a just under a kilo heavier than an equivalent size fridge).

This fridge has a heap of useful features, it’s built well, it looks good and it works well but unless you really have to drink your scotch on the rocks at the end of a day in the bush, we’d suggest you look at one of the CFX3 fridges. You’ll get the same features, minus the ice maker, and more usable storage space and a more power-efficient product. 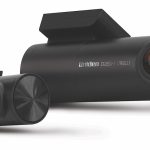