A spy photo from the set of the 25th James Bond No Time To Die gave us our best look at the new Defender, now its work in that movie has been revealed in full.

Land Rover has a long history with James Bond (going back to 1983 when a Range Rover Convertible appeared in Octopussy), and the latest movie No Time To Die (released 2 April 2020) is the latest outing. This movie sees the all-new Defender onscreen along with a Range Rover Sport SVR, Series III Land Rover and Range Rover Classic.

Earlier this year, a spy photo of the Defender on set blew up on social media giving us all out best look at the vehicle. Land Rover has now released a teaser compilation of the Defender in action with stunt co-ordinator Lee Morrison and stunt driver Jess Hawkins.

Lee Morrison, James Bond Stunt Co-ordinator, said: “Designing and co-ordinating the action sequences for the Bond franchise requires a non-compromising mindset. We needed an unstoppable vehicle to help us battle against the elements, steep descents and river crossings so we chose the new Defender. I’m beyond impressed that the Defender is not only back but much, much better”.

According to Land Rover, its design team worked closely with Special Effects and Action Vehicles Supervisor Chris Corbould on the specification of the Defenders in the film. Based on the Defender X model in Santorini Black, with darkened skid pans, 20-inch dark finish wheels and off-road tyres, they were the first Defenders to be built at Jaguar Land Rover’s new production facility in Nitra, Slovakia. 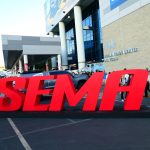 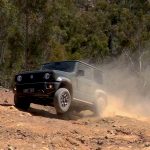