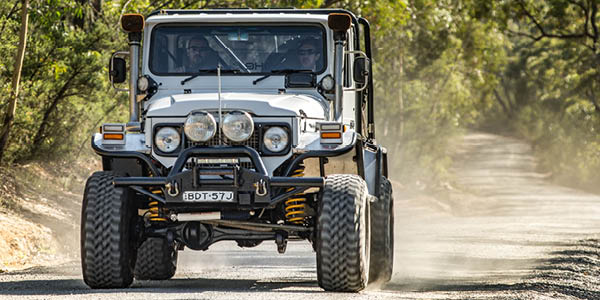 A classic Aussie ’Cruiser with a dash of American diesel: This is how you build a LandCruiser!

Not many people can say they still own their first 4WD. Even fewer can say that it’s a 40 Series. Only one can say that it’s on an 80 Series chassis mated to a 6.5L Chevy V8. Those bragging rights belong to 30-year-old sheetmetal worker Jesse McGrath from the NSW south coast.

Fifteen years ago, he bought the stock ’84 model ’Cruiser off a farmer in Ulladulla. Originally from Alice Springs, the ’Cruiser was ‘virtually’ rust-free and had ‘probably only been around the clock once’. Jesse spends his weekdays fabricating anything and everything, and his weekends out exploring in his biggest project of all. It is obvious the ’Cruiser has come a long way from the rusty factory tray, trusty 2H slug and jarring leaf-sprung suspension. The first thing Jesse did was give the cab a splash of paint, ditch the split rims and slap on a set of 31-inch muddies – enough to tackle most tracks back then! Local to Yalwal (one hour south of Sydney) he has spent the best part of 15 years exploring everything the area has to offer.

When you first purchase a 4WD, you never know exactly how the build will progress… and that is precisely what happened here. Less than six months after Jesse got his red Ps, he was T-boned by a Barina (RIP Barina). Thankfully, the cab survived without a scratch; but the chassis was knocked out of whack and the front diff was now extremely offset. Initially, the plan was to find another 40 frame to slip underneath; but little did they know when Jesse’s old man suggested they put it on a newer model skeleton, that it would be the beginning of something truly unique!

Out with the measuring tape and off to some shopping centre carparks to measure up a variety of later model ’Cruisers to gauge what would fit. A mere two weeks later, they picked up a roller 80 Series chassis from a wrecker in Sydney and started the swap. All the 80 Series engine, gearbox and body mounts went in the bin; then the 40 Series cab was suspended above the new frame and lowered into ‘approximately’ the right spot. Cab and tray mounts were fabbed up, the front cross member was moved back and 100mm got lopped off the front of the chassis to ensure it looked correctly proportioned. In went the 2H and it was sent off to be deemed road legal.

Jesse had always nursed a soft spot for American diesels, so it was only a matter of time (five years) until he dropped one in the ’Cruiser. Enter the 6.5L Chevy V8 sourced from Dewars Performance Engines in Wodonga, Victoria. This low-km engine with a fully rebuilt injector pump and turbo only revs to around 3,500rpm, but it hits boost extremely low so it’s an absolute joy to drive!

The twin stainless snorkels supply plenty of air to the motor and a 4-inch exhaust dumped behind the cab ensures that the motor can both breathe freely and make Prius owners cry.

Thankfully, the wide chassis rails of the 80 frame made dropping the motor in much easier. Additionally, the large engine bay in the 40 – coupled with the tall bonnet – make working in the engine bay a breeze!

Jesse went against the advice of the ever-present ‘Internet experts’ and mated the V8 to a five-speed 75 Series gearbox, which (apparently) was ‘never going to hold the torque’… but he has ‘flogged the piss out of it for eight years and no dramas at all’!

Getting the suspension correct was a challenge with such a heavy motor up front and a solid tray weighing down the rear. Jesse got in contact with King Springs and they sent him a couple of sets to trial in the ’Cruiser until they settled on the heavy-duty 4-inch 80 Series coils, with a constant load rated set in the rear.

Running castor corrected Snake Racing front arms and custom chromoly rear arms that Jesse fabricated in his shop, the four-link rear has been held in place for the last eight years without issue. Amada remote res shocks are in every corner, each with a whopping 12 inches of travel, to help the 40 utilise the coil suspension. Extended brake lines were a must, along with a customised VT Commodore booster and master to help the ’Cruiser pull up at the lights.

Running 35-inch Falken muddies wrapped around 17-inch Raceline forged aluminium beadlock rims and a set of ARB Air Lockers in the front and rear, there isn’t much that can stop the 40 anymore! Jesse also rebuilt both diffs with RCV axles and some strengthened aftermarket crown wheels and pinions to take the extra torque from the Chevy. He has tackled all the hard tracks on the south coast (including Yalwal’s Monkey Gum countless times, and even the infamous Six Stage), proving the ’Cruiser’s capability off-road. Over the last few years however, the focus has shifted towards longer trips exploring the country; and much more time has been spent to turn the ’Cruiser into a comfortable tourer.

The interior had a complete makeover with VDO gauges replacing the less-than-reliable factory ones. The uncomfortable bench seat was ripped out to make room for some 75 Series seats wrapped in a set of Black Duck seat covers.

Jesse has laid some Dynamat on the floor, cutting road noise and heat down drastically; and perhaps the best mod of them all is the recently fitted air-con (yes, a 40 Series with air-con)! In went a new head unit, plus some speakers in the doors and up in the overhead console – and now Jesse can spend hours in the 40 on the open road in relative luxury.

In the later half of last year, the exterior of the ’Cruiser got a revamp with new 3mm alloy guard toppers placed on the top of the scrub bar guards, along with new alloy blinker housings and a fresh lick of paint in the new model HiLux white. Jesse has saved countless dollars by completing 99% of the work on the ’Cruiser himself… and after spending 15 years on the same project, no-one knows it better than he does!

The dual batteries are both mounted underneath the tray: A deep-cycle auxiliary runs the Engel fridge/freezer and there’s a decent cranking battery to get the 6.5L heart beating. Canvas sides are on the agenda to keep the dust/rain out on longer trips. Fuel capacity has been doubled with a custom 60L sub tank giving the ’Cruiser around 700km range. There’s 25L of water storage too, which is handy when rolling into camp. Toolboxes on the tray house recovery gear (for Nissans) along with various tools and camping gear.

For the future trips that will involve chasing lines into the night, Jesse has got his hands on a beaut set of Narva spotlights alongside a Great White LED bar to ensure pesky wildlife can been seen from a safe distance. The work lights mounted up on the tray make setting up camp in the dark a breeze. The 15-year transformation has been second to none and the attention to detail is equally as phenomenal.

Jesse has a few wise words for anyone considering a swap like this: “Do it once and do it right,” he says. “And don’t cut any corners because it all pays off in the end!” 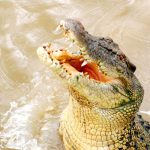 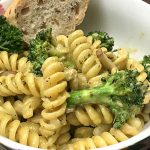