According to Kings, their Big Daddy Deluxe Double Swag is Australia’s #1 selling swag. Its low cost and massive size are certainly appealing but does it live up to the hype? Keep reading to find out.

The Big Daddy Deluxe is massive for a swag and boasts a 70mm queen sized mattress. It features a freestanding design made possible by arched end poles and a telescopic centre pole.

A 450 GSM PVC bucket floor ensures groundwater doesn’t get it and the shell feels quality, made from 400GSM Ripstop poly cotton canvas. The canvas rolls back on both sides to reveal a fly for ultimate airflow and large storm flaps can be found at each end of the tent.

For those looking for a place to store their glasses and mobile phone, there are a couple of handy pockets on the inside.

Who is it for?

The Big Daddy Deluxe Swag is suitable for singles and couples that like a bit of space or those sharing with younger kids. Kings state that the Big Daddy Deluxe Swag sleeps two and I can easily fit in there with my two kids (aged 7 and 9). You could fit two adults and two young kids in a squeeze but it’s a bit close for comfort.

How did the Big Daddy Deluxe Swag perform?

Set up and pack up

Set up is easy and quick for one person. Pack up is easier with two as it’s hard to get the mattress to roll down to a compact size. There is not much to setting it up, consisting of two foldable end poles that create a semi-circle and a telescopic pole that runs the length of the swag. You can also peg out the storm flaps if you like, which is as simple as hammering in two pegs and attaching the rope.

The space is great as you can expect from a swag of this size. As an average height woman of 162cm, I can even change clothes fairly comfortably in there, thanks to its 1m height. Those taller will have the usual struggles of attempting to dress laying down. Of course, if you have a remote campsite this is no problem as kangaroos won’t call the police if they spot you naked outside your tent.

Reviews indicate that the Big Daddy Deluxe Swag may have a problem with leakage. However, it’s important to note that as per the instructions provided with the swag, it must be ‘seasoned’ before use.

This means setting it up, soaking it with water and sponging the water into the canvas. Once it’s dry, you will need to repeat the process two more times. This causes the canvas to contract and expand multiple times, thus removing any holes caused by the stitching process.

Knowing that rain was coming the day after receiving mine, I set it up in the backyard, removed the mattress and let the rain do its thing.  30mm dumped down on it in a short space of time and typical of Queensland weather, the sun came out and dried it all up by late afternoon.

The photo below shows how much leakage occurred in one corner prior to seasoning the tent. It wasn’t that much but if you don’t season it, this would of course seep into the mattress and ruin your night.

I then hosed it twice, letting it dry in between with no leakage. Given the online reviews, I took it a step further and sprayed the canvas with DryGuy waterproofing. I like the DryGuy brand as it doesn’t leave a residue or change the texture of the fabric. Was this necessary? Probably not, but I’ll soon be camping in the snow with two kids so I need to be sure.

Like most swags, if you lay in the sun with it all zipped up, you will create your very own sauna. Fortunately, the Big Daddy Deluxe Swag has great options for airflow.  Both sides of the tent roll completely up, allowing you to sleep with just the fly tent either on one side or both. The two ends also have a window under the storm flaps that you can open.

I haven’t experienced any extreme wind in the Big Daddy Deluxe Swag yet but I do own a King’s single swag that’s seen rough weather and held up like a champ. I’m not expecting this swag to be any different.

Due to the generous length of the swag, there is quite a bit of sag in the sides. Now, this isn’t an issue in great weather but if it’s raining and there are two of you in the swag, this makes it harder to avoid accidentally touching the sides. It almost needs a third set of semi-circle poles fitted to the middle but this would of course increase the weight and set-up time of the tent.

Does it live up to the hype? Well, yes and no. The Kings Daddy Deluxe Swag hits that sweet spot between affordability and value and for that reason, it certainly lives up to the hype. The price makes it affordable for many but it would be unreasonable to expect perfection straight out of the box as you would expect from a much higher priced swag.

Once you have seasoned the canvas and/or potentially given it an extra spray of canvas sealer, it’s a top swag that is sturdy enough to handle most situations. The generous size and thick mattress are a massive bonus and I can see this swag being an essential part of my camping set-up for years to come.

Read next: Kroombit Tops National Park – an off the grid 4WD adventure 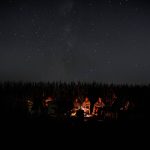 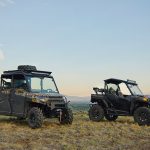