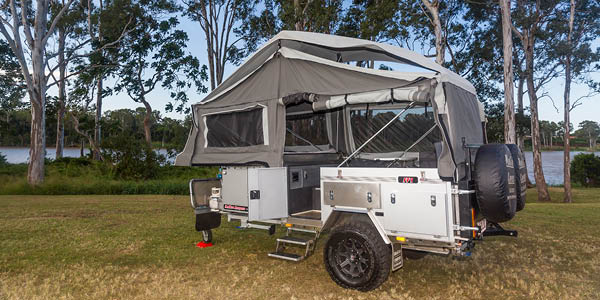 If they are good enough to be rented out to uninitiated tourists, are they good enough for you?

You may recall a few issues back, we got to climb all over Dylan’s rather silly SAS’d, coil-rear sprung, 8-inch lifted D40 Navara for a custom shoot. You may also remember that he built up the Nav for use as a work vehicle for his camper trailer hire and sales business to rescue both trailer and tower when the inevitable happened. We thought it was high time we showed you the campers he sends off into the great unknown every week with backpackers, 4X4 enthusiasts, and city folks who’ve never seen a corrugation, but “want to try this camping thing out and taste the chai lattes of outback Queensland.”

The question thus presents, if you’ve got a fleet of camper trailers for hire, what brand and model would stand up to having 50 different people a year drag it all over the countryside? The short answer is that it’s the ModCon.

The specific camper we got to look at was the forward fold ModCon FF1 Series 3, their flagship model. Dylan has a bunch of these in the fleet and at the end of the day, he’s staking his livelihood and business success on this particular brand and model; so, there’s a lot riding on its ability to perform, and not fall apart.

Armed with an idea and more than a bit of apprehension as to how good a six-month-old camper would look after letting half the population rent it, we caught up with Dylan to go over the ModCon FF1 from top to bottom. To be entirely honest, we were shocked it’d been behind 20 different 4X4s over the last six months, yet still looked this good.

So rather than show you a brand-spanking spit polished camper trailer direct from the manufacturer, we thought we’d show you one that’d been around the block a couple of times, and how well it’s held up … as a rental!

The first thing we noticed about the outside, is that it’s solid. It’s not the typical ‘fold up side with end capping over the spot welds holding it all together that’s become so common in the market these days. The corners are box section, instead of just a piece of folded steel. The forward fold lid was solid, thick, and had minimal flex when it was opened and closed against the dual struts. The lid struts worked perfectly in that there was no ‘free movement’ when opening and closing – it was all solid and decisive in its movement – no falling of the lid once it was past vertical.

All the external hatches have quality hinges and locking push-close mechanisms, with no sharp edges to be seen anywhere. Every single corner and fold we found were all rounded off, even the ones covered by pinchweld.

Underneath it’s about as solid as you’d want. It’s got the standard double bushed arms, dual-shock spring independent suspension. They’ve also had the outer mounting points moved as far toward the outside of the chassis as possible, to minimise the leverage against the mounts – keeping the hubs as close to inline with the mounts as possible. They’ve gone with a round bush and tube setup, simply because of the massive amounts of other brands that keep blowing out the box section used, and every single bush and hinge is greaseable.

The chassis is, as expected, completely galvanised and runs 100×50 box section with a rather solid 4mm wall thickness. Braking is supplied by 12-inch electric brakes, and Dylan’s added mechanical override for those towing without brake controllers (which is most vehicles he hires to). Hubs are a standard six-stud LandCruiser/Patrol hub, and it comes on 16-inch alloys. For water storage it’s got a 120L stainless tank underneath, with bash ribs that also add a heap of structural integrity to stop the tank from flexing and cracking welds, plus it’s got an 80L tank on the back behind the swing out tyre carrier.

Up the front it’s got the usual stone deflector, with gas bottle and jerry can holders. Something we found rather nice was that the jerry can holders slot in from the side as opposed to having to go up and over the stone guard. Makes life quite a bit easier getting a full 20kg jerry into the holders.

As with the vast majority of campers these days, the kitchen slides out the passenger side, and is a full stainless steel affair. Where it differs from most is that instead of the usual lever on the end of the slide to stop it sliding back in, there is a spring-mounted piece of stainless that pops up once it’s opened doing the job. Dylan explained to us that it’s a magic idea, simply because you don’t catch your hip on the lever, the lever doesn’t get muck and grit through it, plus it’s pretty much foolproof when it comes to using it.

The Thetford four-burner stove has a handy little grill beneath it and sits next to the sink with included water pump for washing up duty. Speaking of water, there’s also a water gauge in the battery cupboard, plus the option of having a Redarc or Projecta battery charger included to charge up the dual 100Ah batteries.

Onto the interior of the camper, it’s a rather typical design, except that the whole ‘seating’ area can be opened right up; you’ve got access to the mid storage cupboard from inside, and the stairs for entry are bolted to the underside, not attached to a swing up door. To the sleeping quarters, the extra deep lid will hold a full queen-sized (and depth) inner-spring mattress, and the standard supplied mattress is actually pretty comfy for when you’re ready to call it quits for the night.

The setup is as simple as you’d expect from a forward fold camper, except for one little difference. You don’t need to get in it and push every pole out, front, middle and end. You ratchet the top open on the double struts, open the door, and push the end bar out, and you’re done. It is literally that quick. It does, of course, come with a full-sized awning for the entrance side, which takes a touch longer to set up, however can quite happily be used for overnighters without it. Set up time is literally under a minute (without rolling up the door flap). Don’t believe us? Click on the animation above to have a go at the video. It’s not sped up or altered. That’s literally how long it took from go to woah, and we shot this on a Sunday, so Dylan certainly wasn’t rushing.

For a ‘low-mid’ level camper, the ModCon FF1 has a few little extras that a lot of the competitors don’t. Like the suspension mods, the double strut opening, and the ribs on the water tank. After having a yarn with Dylan about them, he sat down and researched all the different campers that fit the specs, and physically looked at every brand he could find in person and climbed all over them. Especially due to the work he knew they would be doing, and that there’d be a bunch of people dragging it through just about every terrain imaginable.

Can be towed behind just about anything.

Lives up to some of the harshest treatment of any camper on the road.

Stairs could take a whack if you’re doing big steps. 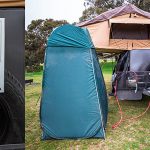 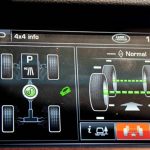