Our resident Outback explorer, Vic Widman, started his four-wheel drive safaris with a trip to Cape York in 1981 in a Subaru. Things were a lot different in those days.

It is incredible to think that it is now over 35 years since I undertook what was in those days an unbelievable adventure. By 1981 there had only been a few people who had followed the Old Telegraph Track to the very top of Cape York; it was a relatively rare journey for anyone to undertake. But to get a complete understanding of what this trip meant to me we need to go back to 1978 when a friend of mine introduced me to the world of four-wheel drive travel. This was Frank and he owned a three-on-the-tree Nissan G60.

After my visit to his home in Melbourne I returned to Sydney and purchased my very first 4WD: A Daihatsu F20 (basically a tin box on cart springs with a 1,600cc motor). I was 24 years old at the time and began exploring the east coast of NSW in this back-breaking excuse for a 4WD. These weekend trips were undertaken with my best mate Tony and his partner Carol. He initially had a Mazda Bongo van (we were almost hippies) and then he graduated to a single-range 1,400cc Subaru station wagon we called the green grub (because it was green).

Tony and Carol were going everywhere my wife Julie and I were going but in far greater comfort – so in 1981 I sold the Daihatsu to the first sucker to come along (my sister, Irene), and replaced the bucking (yes, that is spelt correctly!) Daihatsu with a brand-new Subaru Leone station wagon which now came with a dual-range gearbox (yes, it had high and low range) and an 1,800cc motor. What a 4WD it turned out to be! With my friends Tony and Carol and my sister Irene, together with Julie, I began planning our very first major 4WD safari… a Trip to the Tip. Cape York, that is.

You do need to also realise that in 1981 there were no aftermarket mods for a Subaru – no lift kits, no bullbars, no long-range tanks, no cargo systems, no special off-road tyres. In other words it was stock standard. There were also no HEMA maps or GPS systems, no Facebook or YouTube (what the?) and virtually no information on Cape York to be found anywhere. We had one map for the whole of Cape York, put out by the Queensland road service and known as a Sunland map. It did show a red line roughly where the Telegraph road might be. Oh yes, none of our vehicles had air-conditioning either; in 1981 that was a luxury that few could afford.

So we set out from Sydney in early September 1981, with Irene being joined by our old 4WD mate Frank at the last minute. Just getting to Cairns in those days was an epic drive. We restocked our food there (for an estimated three weeks). ‘Food’ was a very fancy name for the variety of tins we carried… we reverted to calling it either slop or muck and rubbish which we had on alternate nights. Yes, I had a car fridge; an old gas-powered three-way Finch fridge. Don’t knock it, I still have it and it still works provided it is dead level. We couldn’t guarantee reaching Bamaga (there was no car ferry across the Jardine) so we needed enough food to get from Cairns to the top, and back to Weipa – about two weeks’ worth. There were no other resupply points along the Tele Track in those days.

Our aim was to head straight up the Peninsular Developmental Road through Mt Molloy where the bitumen ended, then Lakeland and Laura. Along the way we visited Split Rock and saw the Quinkan Art Gallery on an undercut sandstone cliff. There were no signs or barriers or fees to pay in those days. We found it by chance in fact, after talking to another traveller. Speaking of which, we soon found there were not a lot of people travelling on Cape York in 1981. It was a busy day if we passed two four-wheel drives… and this thinned out to every second day as we got further north. The one common theme from those coming south was the look of astonishment at the two Subies and a usual comment of, “You’ll never make it.” We really had no idea what we were in for.

From Laura onwards things became more interesting. The corrugations were horrendous (we even drove on the edge of the track rather than the centre); there were no bridges over the rivers including the Hann and the Creek at Musgrave Station. The Sexchange Hotel was alive and well at Coen and we camped in the dry creek bed just north of the town. That afternoon a local Aboriginal family came down to the river near us for a swim and to collect some traditional food.

The Archer River Roadhouse as we know it today did not exist and the river was a major open water crossing. It took us a good hour to check it and get all the vehicles across safely. After passing the turn-off to Weipa the road deteriorated further to just a single-lane track; all the traffic at that time was destined for Weipa and its huge bauxite mine. The Wenlock River was another open river crossing with deep holes.We had to walk it to establish the best route across… more on the crocs later. We had another bush camp near the Moreton Telegraph Station. From here on it became a real 4WD adventure. Each creek and river crossing was in a virtual natural state. In 1981 there was just one track at each waterway; not the multiple choices as now.

Yes, we crossed the Dulhunty; it took us another hour to suss it out and get across. But it was Cockatoo Creek that caused the most anxiety. It was deep and rocky with a soft sandy exit that had deep wheel tracks embedded in it for more than 30 metres. We worked for 45 minutes with our shovels to take the top off the deep wheel furrows so the Subies would not bottom out. This creek took us nearly two hours along with lunch before we were all safely across. Before reaching the Jardine River we had numerous obstacles. Remember there were no chicken runs, there was just one track – the Old Tele Track. Gunshot saw the Subies and the Daihatsu lift wheels precariously off the deck as they slid down into the water; nothing like the vehicle-destroying entrance that it is now, but I did worry for the next week how we would possibly get back up.

There were creek crossings that required us to drive upstream for 40 metres to find the exit; there was the famous log bridge; Nolan’s Brook was a breeze in those days, but as the sun was setting Tony’s Subie bottomed out in a water crossing in what looked more like a swamp to us. Digging and pushing at dusk in a swamp close to the Jardine would be madness these days due to the crocs… and we kept a watchful eye in ’81 too! Finally, after a week of hard driving we arrived at the Jardine River. No car ferry in those days, just 100 metres of broad fast-flowing water to cross. Today this would be a formidable river crossing, if you were allowed to have a crack at it. In 1981 we had no choice. If we were going to get to the Tip this river had to be driven through. So now a word on the crocs before you think I am totally mad or irresponsible. Crocs were being legally culled up until 1974 and, to be honest, we never saw a single croc on the Cape. I’m not saying they weren’t there, but rather that all the big ones had been hunted down at the time.

The only way we were going to get across the Jardine River was to walk it to ascertain the depth, how fast it was flowing and how soft the river bed was. It was all sand. But upon walking it the major problem was the exit. It had log ramps extending into the river from the northern side to aid vehicles exiting on the muddy bank. The problem was the foot-high jump-up from the river bed onto the log ramps (one for each wheel) and whilst negotiating this the vehicle would be in a metre of water at the end of a 100-metre-wide river crossing!

Next issue, Vic continues his tale of this amazing adventure. It seems the Jardine wasn’t going to be the only serious obstacle on this epic 4WD safari. 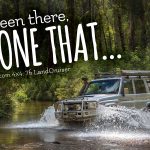 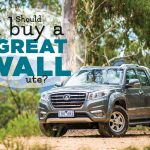