Because getting there and back is part of the adventure.

The Big Red Bash is just a few short weeks away. The beers are being shipped in, some of the biggest names in Australian music are finalising their song lists, and soon the desert will be teeming with life in a way no other event can rival. The only question remaining is: How are you going to get there?

Sure, you can punch the details into your GPS and find yourself staring down the barrel of a 20hr road trip with nothing but bitumen and road signs for 90% of the way; or you can take the Unsealed route instead. The Big Red Bash is a long, long way from anything, and that’s its appeal. But if you’re heading that far, why not make the most of it? We’ve put together seven routes that’ll make the most of your adventure into the heart of Australia. From direct routes through the Outback to epic bucket list adventures, these trips won’t disappoint.

If you’re in a hurry, head up north through Bourke, take a left at Charleville and then blast your way along the Birdsville and Diamantina development roads through Windora. But if you’re doing this, you’re sort of missing the point of travel and might as well stay at home googling images of the Outback… you’ll take about as much away from it.

If you’re feeling a little adventurous, add an extra two days to your trip and head west to Broken Hill and Silverton. We struggle for iconic Outback locations in NSW so make the most of what we have. From here, keep heading west along the Barrier Highway to Yunta in South Aus, where you’ll turn right and up into the Flinders Ranges. If time is on your side, head north-west up the Oodnadatta Track before crossing the Simpson west to east. Alternatively, you can stay east up the Birdsville or Strezlecki tracks – leaving the Simpson until after the Bash.

Queensland, it’s time we had a talk about all the amazing 4X4 destinations you keep hogging to yourself. It’s just not fair. With such varied and stunning locations right on your doorstep it’d be understandable to never leave your State. In fact, you could have an adventure all the way to the Bash without ever crossing State lines… but where’s the fun in that?

Kick off your out-of-State-but-only-because-you-want-to adventure by heading to Cameron Corner where Queensland, New South Wales and South Australia all meet. You’ll need to stop in at the Corner Store before playing a round of three-State golf; then it’s time to head further into the desert. Travelling west, you’ll come within cooee of the Strezlecki Track and a straight shot to Birdsville; or you can head up the Old Strez, picking up Innamincka and the historic Dig Tree on your way north.

While the Northern Territory is special in its own right, it’s also the proud owner of the Binns Track. For those of you who haven’t heard of it before, it’s over 2,000kms of tracks winding through some of the Northern Territory’s most stunning and remote locations. Bill Binns, a 32yo National Parks veteran, designed the track specifically to open up access to some of the more isolated parts of the NT – so you’d be nuts not to take advantage.

Starting at Timber Creek the track snakes its way south through the Humbert River Track, Dunmarra, Devil’s Marbles, the Davenport Ranges and down to Mt Dare via Alice Springs. Take inspiration from the track and deviate to your own dream locations before making your way to the Bash and heading home through Central Queensland via the Gulf.

Let’s not sugar-coat things, Perth. You’re a very long way from everything else in the country. It sort of comes with the territory of being the world’s most isolated city. Hence if you’re travelling so far, why not make the most of this already epic adventure and tick off all the bucket list items people travel the world to see? The Nullarbor is appropriately named; so give it a miss and head north through the heart of Australia to see what so many red-faced poms travel so far to see.

Head up the now iconic Connie-Sue Highway to Warburton, then cut across to Surveyor Generals Corner. From here you can pick up Uluru and Alice Springs before heading down to Mt Dare through Finke Gorge and crossing the Simpson Desert (visiting Poeppel Corner on the way).

After the event, head east to pick up Haddon and Cameron corners; with a stop-off at Coober Pedy on the way home to complete the dream Outback run.

If you’re from Adelaide and you’re after an adventurous way to get to the Big Red Bash – just head north. That’s about it. Your State is home to some of the most spectacular Outback tracks the whole country has to offer. You could literally spend months zig-zagging across the region… so enjoy it.

Follow the Old Ghan Railway north to Maree where you can jump on the Oodnadatta Track. It winds its way through William Creek and Oodnadatta, back onto the Stuart Highway; but you’ll want to take a right turn 18 kays north of Oodnadatta and start making your way east to the iconic Mt Dare Hotel. From there it’s a quick jaunt across the Simpson Desert before rocking up at the Big Red Bash like the now-seasoned Outback traveller you are. On the way back you can head down the Birdsville Track (or head east to the Corner Country if you’re up for more adventure).

If you’re heading to the Big Red Bash from Melbourne you’ve got a few options to get there… but most will eventually overlap with people leaving Sydney, Hobart or Adelaide. Don’t feel left out. There’s a heap of fun to be had before bumping into other travellers on your way north.

Before leaving the city, head straight west and hug the coastline until you reach Adelaide. This will see you travel through your own Portland Dunes as well as pitching a tent at both Canunda and Coorong National Parks on your way to the city of not-much-but-churches. From here, the two most common paths northwards will be west up the Oodnadatta Track or east via the Strezlecki and Birdsville tracks.

If time is on your side, keep heading north-west and explore some of Central Australia before making your way across the desert.

Hobart, you normally lose out on lists like this (or just get lumped in with your northern cousins). But hey, you’re your own State dammit and you’re not just going to fall in line. While the Melbournians are heading off via the South Australian coast, you’re going to head north to Fraser Island. Sounds crazy, and that’s probably because it is. But how often do you get a chance to drive on the mainland, let alone that far north? On the way back there’s plenty of options to pick up the real Outback experience via Adelaide – so make the most of your new-found latitude and see a side of Australia you’ve never seen before. It’ll add a week to your trip… but it’ll be money and time well spent seeing the best Australia has to offer. The Big Red Bash is all about pushing the boundaries of travel and opening up Australia to Australians. Do your part by kicking back on a tropical island on the way. 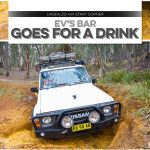 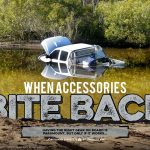