Welcome to our turbo guide which is aimed at explaining everything you ever wanted to know about turbocharging.

If you get your hands on any diesel-powered vehicle these days, chances are they will be helped along by a turbocharger hanging off the side of the engine. For a lot of older folks who might’ve been used to a big-capacity, naturally aspirated diesel (think the old 2H donk from the 40 Series Cruisers), a turbo was a bit of a gimmick that gave you a bit more get-up-and-go but were prone to cause pistons to melt and engines to blow up.

You could tow a 30-foot van up Mooney-Mooney hill with the right foot planted in top gear and never have to worry in a 2H (and only down change cause she was down to 50km/h), but if you tried that in a turbocharged 12H-T 60 Series Cruiser, exhaust temps would skyrocket, and if it was even slightly over-fuelling, you’d melt or crack a piston and be up for a complete rebuild. This very thing happened to my 80 Series 1HD-T LandCruiser before I came into possession of it. Those days are long gone, with high-pressure common-rail injection systems and more sensors than you can poke a stick at now the norm, along with pretty conservative tunes from factory to stop folks blowing up their diesel engines. So let’s get into everything you need to know about turbos.

Despite several advances in the areas of electronics and fuel systems, turbos had stayed relatively unchanged for a long time. A basic setup consisted just the single turbo with a wastegate keeping boost pressures in check, and that was that. Now, with a better understanding of how boost will affect a diesel engine, and other progresses in technology, things have changed quite a bit in the world of turbos. The Basics: how a turbo works

Let’s get the basics of how a turbo works out of the way first in our guide. The long and the short of it is a turbo works by generating pressure (boost) that gets forced into the engine. The essential components of a turbo are a pair of impellers with housings (turbine and compressor) joined by a shaft, and a wastegate (or VGT – but we’ll get to that further down) that regulates the amount of boost generated.

Exhaust gas drives the turbine which in turn spins the compressor, forcing compressed air into the engine, which then allows the engine to burn more air and fuel each revolution. This increase is exponential; as the engine begins to rev harder, the turbo will generate more boost and so forth (to a point). Essentially, a turbo is an exhaust-driven air compressor.

The issue here is the strain and load that the boost puts on the engine – which is where the wastegate comes in. Once the engine generates a certain amount of boost (generally measured in pounds per square inch (psi) or bar, the wastegate will open, allowing exhaust gas to pass by the turbine wheel, thus not generating any more boost.

The wastegate works by way of an actuator plumbed to the intake side of the turbo. When the boost on the intake side reaches a certain point – say 8psi for an old 12H-T – the pressure forces the actuator to open, which in turn opens the wastegate, causing any extra exhaust gas to bypass the turbine. 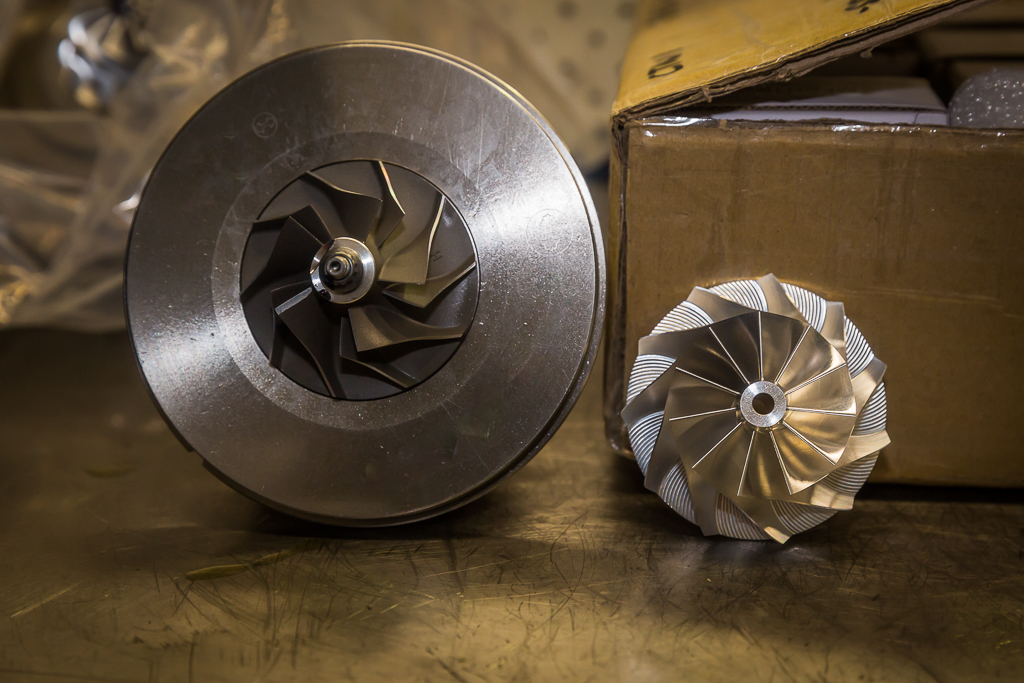 The amount of pressure is set by the manufacturer to what is believed to be a “safe” level that the engine can handle over its lifetime. Back when the 12H-T was a ‘new’ engine, 8-10psi was about it. These days, however, in common-rail engines, standard pressures upwards of 20-30psi are not unheard of, and these engines can handle that amount of boost. They are either wastegated to that level or have a variable-geometry turbocharger fitted.

Multiple-turbo designs generally work in one of two ways: in parallel or in series (the latter also known as sequential). For a V8 engine with a twin-turbo setup you’ll have one turbo looking after each bank of four cylinders, and these will generally be smaller turbos than if there was just one turbo being driven off all eight pots, which reduces lag. The other possibility is to have a smaller turbo feeding into a bigger turbo, again reducing the lag the larger turbo would inherently have by itself, and this is known as a sequential setup.

Random pub ammo: your average turbo, when used in normal daily use, will spin upwards of 175,000rpm, so remember, fingers and compressor wheels don’t mix! 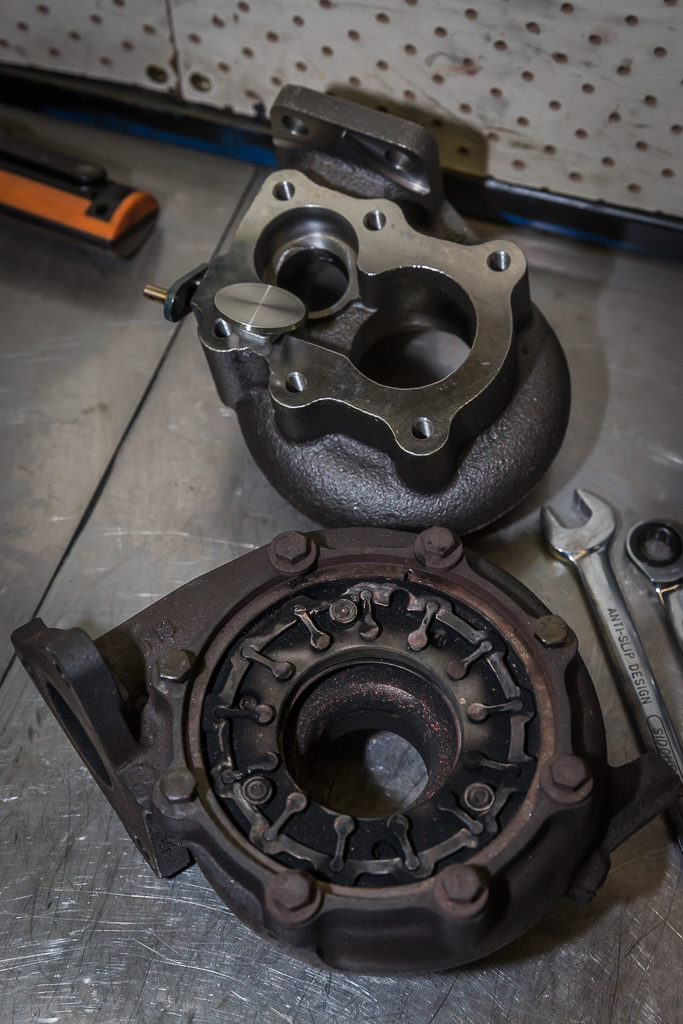 Next up in our guide to the turbo, let’s look at VGT and wastegated turbos. We explained above how a wastegate turbo works – by allowing excess exhaust gas to bypass the turbine once it’s reached the set level of boost. VGT or Variable Geometry Turbochargers work quite a bit differently. The fundamentals are still the same – exhaust pushes turbine, which turns compressor, forcing more air into the engine – but how it generates boost throughout the entire rev range and then offloads extra boost is quite different.

First, we need to know about Air Ratio (AR). The AR is the ratio of the area of the exhaust turbine inlet to the radius of the turbine impeller. With a lower ratio (and usually smaller turbo), the inlet is smaller, so the exhaust gas flowing through the turbo will be faster but with less volume. The opposite is true for a higher ratio; more gas volume can pass but at a lower velocity. This changes the engine speed at which the turbo will build boost, and how much gas it can flow. A smaller AR will generate boost earlier in the rev range but will begin to run out of puff up high. A larger AR will, as you may have guessed, build boost later on but is able to flow more gas and air, thus creating what is quite unaffectionately known as ‘lag’ while it’s building boost. With a standard non-VGT wastegated turbo, the AR is set based on the rear turbine housing and impeller. This ratio is set toward the mid-rev range, so you get a compromise of being able to build boost quickly but still have enough puff when you’re off and moving, but it’s not perfect. Wouldn’t it be great if you could have a turbo that could modify the AR while in motion, and also vent any excess exhaust gas so it doesn’t over-boost the engine? Enter the VGT.

In the rear (turbine) housing of a Variable-Geometry Turbo there are a bunch of vanes around the inside of the housing. These are controlled by an actuator which, when they open and close, increase and decrease the aspect ratio of the turbine. When the vehicle is at low engine speeds, the vanes close down to increase the speed of the gas flow, and then they open up when the engine speed begins to get to the mid-high rev range, thus allowing more gas through. Where this is different to a standard wastegate turbo is that the boost is limited by the vanes – if the gas can go around the turbine blades, it will – so increasing and decreasing the AR will also impact the amount of boost generated.

We got to sit down with Tony and John from Motovated Turbo and Mechanical in Toowoomba, Queensland a while back and got the ins and outs of turbo modifications and what and what not to do.

Why is it worth high-flowing a turbo?

High-flowing a turbo enables more air to flow into the engine and this can improve turbo efficiency. If you have a larger compressor wheel this allows more volume of air to flow into the engine under the same maximum boost pressure. As the compressor wheel is making an increased volume of air easier, the air intake temperature can be reduced, and this also helps to improve power. You can also increase the size of the exhaust wheel, and this helps to reduce the amount of exhaust manifold back pressure.

Reducing back pressure allows the engine to work easier and improves exhaust flow, which in turn increases engine power and torque. On Nissan TD42T and TI engines, this was the start of the performance gains. From factory, the TD42T/I had 42psi of back pressure on the standard turbo for 8-9psi of boost. With a high-flow turbo, you can reduce this down to 16psi of back pressure and achieve significant power gains. The trade-off in going to the larger turbine is you will induce lag and reduce low-rpm performance. Small high-flow turbos can produce increases in power without any noticeable change in low-rpm response.  A high-flow turbo can work better than fitting a bigger turbo in some situations as all of the original pipe work and fittings will still fit exactly the same as factory, whereas fitment of a new, bigger turbo means new plumbing and a loss of the factory appearance.

In short, yes, it can. It is no different to many other modifications which, once fitted, will affect the factory warranty. Is there a VGT upgrade, and is it any different and what does it entail?

VGT upgrades are the same as upgrades to standard high-flow turbos; you fit larger compressor wheels and larger turbine wheels. This will improve the airflow into the engine and exhaust gas out of the turbo, in turn improving performance.

Some engines like the Nissan ZD30 respond well to a larger turbine wheel as it helps to reduce the back pressure in the exhaust manifold, minimising the chance of blowing gaskets while also improving performance.

On some vacuum-operated turbos you can change the actuator to a pressure-type actuator, which can help to improve boost control in some situations. Turbo modifications can also be tailored to suit your vehicle and driving requirements. It is best to discuss your exact requirements with an expert in the field of turbo modifications and tuning to ensure you get the best turbo setup for what you are trying to achieve.

And thus brings us to the end of the Unsealed 4X4 team’s guide to turbos. We hope it’s been of use. 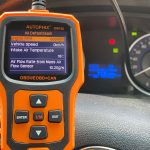 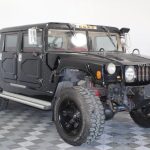