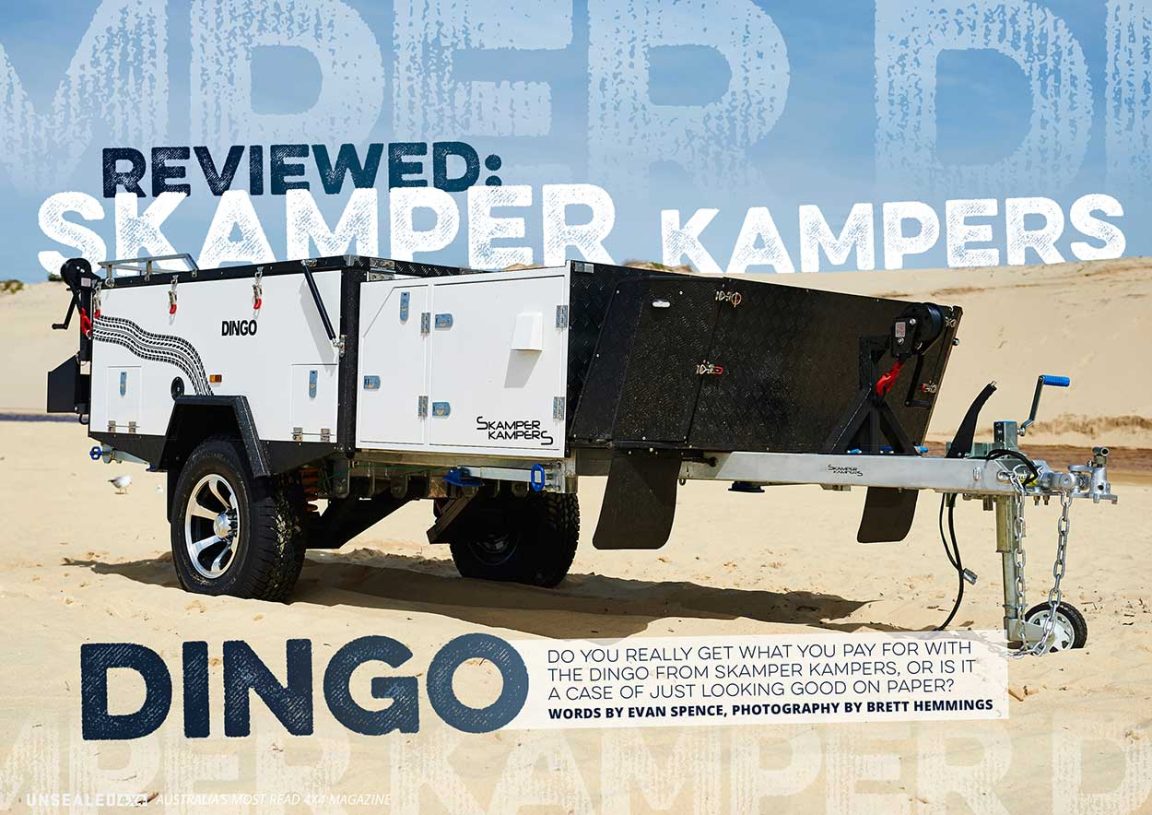 Do you really get what you pay for with the Dingo from Skamper Kampers, or is it a case of just looking good on paper?

The old saying ‘you get what pay for’ often rings true. From mobile phones to bath towels and everything in between, there is generally a reason why affordable products are ‘affordable’. But who is to say you need the very best mobile phone or bath towels, when something cheaper will happily and easily do the job? When we saw the Dingo forward-fold camper trailer from Skamper Kampers, we have to admit to being impressed at the levels of standard inclusions offered for quite a reasonable price tag. We’re talking under $20,000 for a well-optioned forward-folding camper. On paper, it looked to be a winner, and in the flesh it really is quite attractive to look at too. But in the real world (and not a specs box on a website), will it actually perform the tasks you want it to?

Amazingly, thanks to the forward-fold design, setting the Dingo up is really rather quick and easy. Simply unfasten the buckles on the sides and rear, let the gas struts assist flipping the tent forward, and adjust a few poles inside. It is that simple. Things get a little trickly when it comes time to set the awning up for the first time – but after doing it once you will have it licked (and the same could be said for most camper trailers). The interior layout is fantastic, with a couch and table area on the right that converts into a bed, and a large queen-size mattress to the left. LED strip lighting has been included throughout the camper, and it works very well too. Ventilation is excellent also, with the ability to roll up nearly every canvas wall on the tent. This also provides a commanding view while relaxing on the internal couch, not that we were relaxing during this review … honest, boss! It would be good to see more storage inside though, just for little things like toiletries and books etc. There is some space in the boxes under the couch area for blankets or towels, but a little more storage will never go astray. Otherwise, the interior of the Dingo is a nice place to be.

The first thing I noticed was how heavy the Dingo is. Weighing in at close to 1,400kg, you definitely know the Dingo is behind you. But, it tows quite well for such a behemoth. If anything, the weight means there is actually some decent quality steel in this unit. One thing I loved about the Dingo was how much external storage has been offered. There are external cupboards and hidey-holes all through the trailer – meaning you can store plenty of gear from the outside. The kitchen operated without issue; although it was slightly frustrating to have to remember to unplug the light over the stove before rolling it away as you would damage it otherwise. The fridge slide on the front is simply massive – and you won’t have a problem fitting a decent-size fridge in there – however without a full tank of water in the rear (acting as ballast) you will quickly realise how much weight is over the trailer’s drawbar. Not a major issue, just something to be aware of when towing.

Skamper Kampers pride themselves on including a full-frame one-piece chassis under the Dingo. This is bent into shape, meaning no cut and shut techniques are employed – resulting in a stronger platform. And we have no reason to dispute this claim. One thing we didn’t like though, was the independent suspension. Again, it looked great on paper, but when you take a closer look, it just doesn’t work very well. I noticed that, while driving along a beach, the sidewalls on the (Chinese-made) Cooper tyres were expanding and contracting on every bump. This is to be expected while running reduced tyre pressures, but not to the degree experienced. And it was easy to find out why. There is a limiting chain fitted to the suspension arms that prevents the suspension from drooping so much the coil dislodges, or a shock absorber is maxed out and damaged. In theory, this is a good thing and something all camper trailers of this variety employ; but this chain was tight even on level ground. So, zero ‘down travel’ is offered by this suspension. There is also about 5mm clearance on the bump stops so it has no ‘up travel’ either. Why go to the effort of offering independent suspension, without taking the time to make it work properly? This would be an easy fix (and something the Skamper Kampers people admitted to being aware of after mentioning it to them) so hopefully it will be sorted by now with a longer chain and correctly matched shock absorbers (if required).

This is what makes or breaks a camper trailer at this price point, and unfortunately there were a few things that certainly cheapened our view of the Dingo somewhat. On this model for example, the holes drilled for the water tank bashplate weren’t straight … or round, even. You wouldn’t pick it unless looking, but I sure did. Also, the front water outlet on the drawbar seemed to be installed in the wrong spot, so it hit the jockey wheel when trying to raise it. Another black mark was the gas bottle storage on the front. With the tent opened, you can’t access the latch to open the cover; and with a gas bottle in place, you can’t actually open the cover anyway – as it hits the gas bottles. Again, the manufacturers seemed to be aware of these issues; and they are being addressed. These points certainly aren’t deal breakers. All are easy to sort out. But they must be mentioned. The wiring throughout the Dingo was quite neat, and the electronic switch panel hidden in an external cupboard was a handy touch for easy control. All doors and cupboards operated without any issue too, and all locks were easy to operate – which is a good thing considering how many storage nooks and crannies the Dingo has on the outside. No sand, dust, mud or water entered the trailer on this test either; which is obviously a good thing.

This is where Skamper Kampers has the advantage, by providing many brand-name products on the Dingo rather than generic parts that could be questionable quality-wise. This is a clever tactic, and one that should be applauded. The notable mentions include a McHitch 360 off-road coupling, ARK heavy-duty swing-up jockey wheel, a Dometic three-burner stove and a CTEK MX7 battery charger to power the internally-mounted batteries. Skamper Kampers obviously backs its product too: The Dingo is covered by a three-year structural warranty.

I like the layout, and the amount of features offered on the Dingo. It arrives complete without the need to pay for optional extras that you do need (that should be included anyway) which is something I like too. However, I feel it definitely could do with some refinement in certain areas that I have highlighted. Would I own one? I’m not sure, to be honest. I really like that layout … but I just don’t think I’d personally enjoy doing a terribly long or hard trip with a trailer that weighs as much as two Suzuki Sierras. If you are sticking to National Parks and are not interested in the Canning Stock Route, or usually set up a base camp before going exploring and are prepared to deal with some niggling issues (which hopefully Skamper Kampers will have sorted for you), it could be a different story. What I can guarantee from my time with the Dingo is that you will have a very good night’s sleep and an enjoyable camping experience with this trailer. And not just on paper, but in the real world. 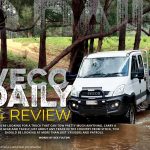 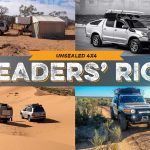