The team decided to do a community service and went camping… for research purposes, to help you decided which option might be right for you – swag, rooftop tent or camper trailer?

Dex: Let’s get this out the way up front. For the longest time I was a swag guy. I didn’t want to cart a heavy lump on my roof, nor did I particularly want to have to lug a trailer behind me. That was my attitude up until a couple of years ago – and this little overnighter reinforced the fact that I’d been wrong. Very wrong. These days I regularly take trailers out for review; and I actually own a rooftop tent, several regular tents and a very well-worn swag (and when I’m going away on a non-work trip that’s what generally gets thrown in the back of my eyesore of a Land Rover). I guess you could say that I’ve had a fair bit of experience with all three camping methods though, and I got to thinking one day about which one was ‘the best’. Obviously each of them have their good and bad points, and what may suit me perfectly might be horrible for the next person.

I brought the discussion up with Deputy Editor Evan Spence and long-time contributor Tim Stanners during a ‘content planning meeting’, at the pub. As it happens, Evan’s weapon of choice for camping is a roof-topper, and Tim has quite literally towed his Cub camper all over the country and is heading off again to the Cape in a few weeks’ time – so these guys were the perfect cross-section of campers to be having this argument with. To settle it once and for all, we decided to go camping to assess each other’s setups and ask ourselves some hard questions about whether we’ve got the right shelter for our individual needs or if we were going to be turning up to the next camp trip with a new setup.

Dex: For me, a swag has always had that ‘just chuck it in and hit the road’ appeal. You can set them up anywhere, I’ve never had a bad night’s sleep in one, and they are about as bare-bones and basic as my entire tertiary education. The good points include the ease of set-up; the small amount of space they take when set up which allows you to pitch camp in a smaller space; and just all-round general ease of use.

The downsides are that they’re small; they can get pretty cramped if you like to stretch out; and you still need to pack everything else such as food, water and camping gear on top of a fairly bulky swag-bag. But for quick weekenders as a single person (or even a couple), they’re still hard to beat for my money… I’d be lying if I wasn’t throwing a few envious looks over at Tim’s camper trailer though.

Evan: I bought this rooftop tent a couple years back, after moving up from a swag… which was bought after going through about a hundred cheap dome tents. I have to say, it’s made camping so much easier for me. The tent is nice and spacious, it’s always up on my rack so it’s ready to go at the drop of an Akubra, and it only takes a couple of minutes to set up.

It’s not without its drawbacks however. The whole ‘being up and out of the way’ thing is a double-edged sword. It’s great for being up in the breeze and away from creepy crawlies, but when nature calls at 3.00am and you have to climb down a metal ladder slippery from rain – unless you’re an Olympic gymnast, it’s generally about as fun as a visit to the dentists.

Out of the three camping methods tested, it was also the slowest to pack down (quickest to set up, though). Getting the bag back over the top and the zips done up can be a pain; not to mention you have to clamber up onto your roof, which may be an issue for older folks or those with bad backs… like me. Then there’s the whole ‘big rectangular windbreak’ factor that’s basically impossible to get around. My Aventa unit is slimmer than many on the market, but it still does cause the vehicle to use a little more fuel. Overall, I don’t miss my swag (OK, I do a little, Dex was packed up and ready to go while I was still King-Konging on my GQ’s roof), and I have no plans to buy a camper trailer anytime soon – so for me, the rooftop tent works a treat. Great for weekenders or weeks-long trips into remote Australia. I love it.

Tim: I have a family of five. Carrying swags for all of us, not to mention enough food, water and clothing for remote travel (which we do a lot of), would mean I’d need a vehicle roughly the size (and with the carrying capacity) of an Airbus A380 to fit us all in. For me, a camper trailer just made sense. And after being all over the country with our little Cub, I can’t say I regret it one bit. Now to be honest, I did sneak a look over at Ev’s roof-topper and think back to simpler times when it was just me and my wife getting around without the kids. But for my needs these days I just can’t think how I’d get by without the trailer.

The big selling points for me are that it’s self-contained. I don’t need to carry food, a fridge, cooking gear, clothes or tents in the back of my Prado – it’s all in the camper and can be accessed in seconds. Also, when I reach camp and feel like going for an explore around the local tracks, I can simply unhitch and I’ve got a beaut basecamp to come back to. No folding up tents for me! Sure, it’s not all beer and skittles. Towing means higher fuel consumption and a (very) few tracks are off-limits for towing; but considering I’ve crossed the Simpson a couple of times, done Tassie, explored WA and have over 50,000km under the Cub’s belt, I can’t say it’s ever slowed me down to the point where I’ve thought of getting rid of it. For a family that loves to camp together and do some pretty big trips, a camper trailer is the way to go.

Dex: Clearly, the swag, rooftop tent and camper trailer each have their own pros and we could each see the benefits. But in the end, we all still loved our own setups. And we concluded that’s what it’s all about, tailoring your camping experience to your needs. For those of us who don’t want our tent to be permanently attached to our vehicles and who do a lot of quick forays into the bush, a swag is still the way to go. For those of us who like a little more comfort and want to spend a little longer out in the wilderness, a rooftop tent is hard to beat. For those who don’t mind towing in exchange for a massive amount of room, convenience and comfort for months at a time, a camper trailer is still the best solution; and frankly, after watching Tim set it up and pull it down in about six minutes, it had me and Ev questioning our choices…

Is your battery weighing you down? Read to find out. 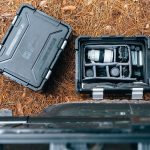 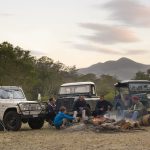